Activists have begun a campaign calling for construction of a bigger hospital in Gaza's Rafah, where the only hospital has been unable to meet the needs of the residents in times of peace and war. 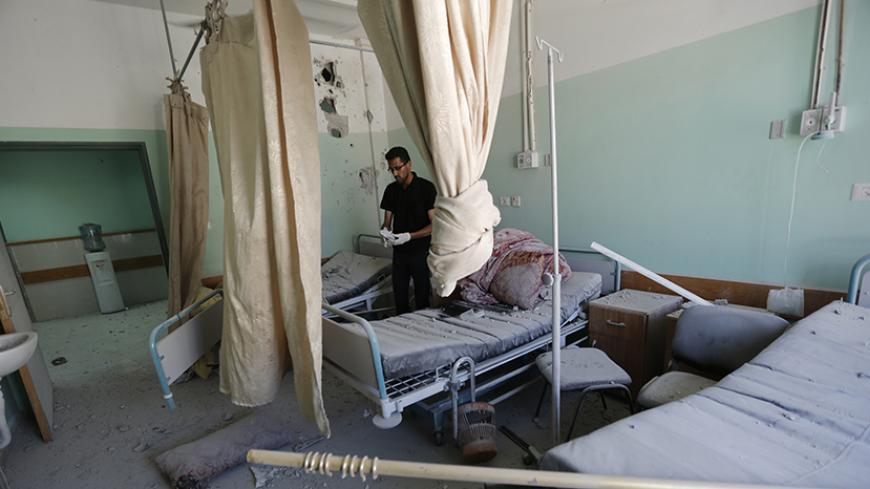 A Palestinian employee inspects damage at the hospital in Deir al-Balah, in the central Gaza Strip, after the building was shelled by the Israeli army on July 21, 2014. - AFP/Getty Images/Mohammed Abed

RAFAH, Gaza Strip — Amer Muqayyad can still remember how his wounds bled for more than an hour at the Abu Youssef al-Najjar Hospital in Rafah. He was not given a chance to be treated by the doctors.

“I was injured by an Israeli rocket fragment during the Rafah massacre that occurred during the Israeli war on Gaza [in August 2014]," Muqayyad, 24, told Al-Monitor. "Because the Abu Youssef al-Najjar Hospital — which is the only hospital in the city — was crowded with wounded and martyrs, I continued to bleed for an hour before a nurse hastily treated me and asked me to leave the hospital immediately to make room for other patients.”

The Rafah massacre was part of an extensive Israeli military operation that took place last Aug. 1 during the war on Gaza. The artillery opened heavy fire on all the city’s districts and killed 112 on the first day, and another 120 on the second and third days, according to a report by the National Assembly for Democracy and Law.

The same report stated that the war claimed the lives of 454 in Rafah city, including 363 civilians, 128 children and 80 women. This is while the number of injured reached 1,052, mostly civilians.

Atef Hout, director of the Abu Youssef al-Najjar Hospital, believes that, had the medical capabilities been available, it would have been possible to save more lives. “The absence of a central hospital in the city has resulted in the death of many wounded,” he told Al-Monitor.

“The hospital was initially established to be a center for primary care. During the Palestinian uprising in 2000, it was turned into a hospital as more departments were opened to handle emergencies. Yet, it still lacks important departments, such as an intensive care unit, and it only includes two operating rooms. This equipment is not enough to meet the needs of the city's population in times of peace, let alone in times of war,” Hout said.

He emphasized the need to establish a central hospital in Rafah, which has a land area of 55 square kilometers (34 square miles). “To provide the 230,000 people living in Rafah with quality health services, a hospital equipped with at least 230 beds must be built," Hout said. "The hospital I am managing is the only one in the city. It covers an area of 4,000 square meters, with a total of 60 beds distributed over all the departments.”

The urgent need to establish a central hospital in the city has prompted activists to mobilize. On March 18, they started the campaign #Rafah needs_a hospital on Twitter and Facebook.

Mohammad Sharif, the campaign’s coordinator, told Al-Monitor, “The campaign is a cry from the heart of Rafah’s suffering, which lacks a hospital able to meet the people’s needs and that is good enough to handle the Israeli crimes that have been committed against [Rafah] over years of conflict with the occupation.”

The activist explained that the city’s location in Gaza’s far south isolates it from the rest of the provinces, which makes it impossible to move the city's wounded to other hospitals in times of war.

The city’s residents were forced to put their dead children in freezers, as there was no room in the morgues of the Abu Youssef al-Najjar Hospital during the Gaza war. On March 17, an activist from the campaign attached an image showing the corpses of children placed in an ice cream freezer and tweeted: “What have they done wrong? They did not have a decent life, and when they died they were placed in a freezer!”

The online campaign has attracted Gaza Strip writers, cartoonists and intellectuals, who demand that a central hospital be established in Rafah. Palestinian author Mustafa Sawaf called on every citizen to donate $1 to build a hospital on March 16 through his Facebook page.

Cartoonist Alaa Allagta posted a cartoon on Facebook on March 16 showing a child from Rafah wounded by an Israeli rocket, knocking on the hospital’s door. A voice coming from inside answers: “There is no room here, take a painkiller and come back tomorrow.” The cartoon reflects how badly Rafah needs a medical complex.

The bitter reality of Rafah's health care situation encouraged Palestinian tribal and medical figures to establish in March an association dubbed Friends of Rafah Medical Complex to follow up on the efforts to build a central hospital in the city. They also formed a constituent committee and elected a board last Dec. 3.

Jamal Abu Hashim, the head of the association, explained in a March 5 statement that the association managed to get the Palestinian government’s approval to allocate a 52-dunam (12-acre) plot to build a central hospital. He noted that several obstacles are blocking the hospital’s establishment, chief among them the Israeli siege and the lack of funds and support.

“The project requires huge sums of money, but we are determined to break the Israeli siege and to continue with the idea of the complex. We hope that this humanitarian project sees the light through [international] contributing donors, and to turn into a concrete reality able to provide optimal health services to the city’s residents and those in need,” Abu Hashim said.

As a result of these popular efforts and activities, Rami Hamdallah, prime minister of the reconciliation government, promised to allocate $50 million to build a hospital in Rafah during a March 25 meeting with businessmen in Gaza. He said that the hospital’s cornerstone would be laid during his next visit to Gaza, though he did not mention a date.

Until a central hospital is built in Rafah, the residents will either have to bear their suffering longer or travel long distances to be treated at Al-Shifa Hospital in Gaza City, the largest medical complex in the Gaza Strip. Yet, what these people fear most is the outbreak of a new war.