Yazidi girls tell of escape from IS

Yazidi girls recount their harsh ordeal and the scars remaining from being captured by Islamic State militants. 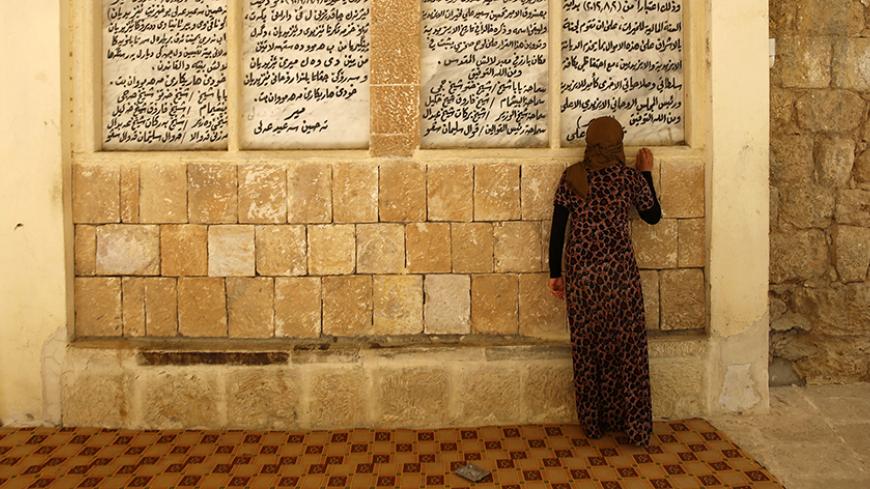 A displaced woman from the minority Yazidi sect, who fled violence in the Iraqi town of Sinjar, worships at their main holy temple in Lalish in Shikhan, Sept. 20, 2014. - REUTERS/Ahmed Jadallah

For Ibtisam, a 15-year-old Yazidi girl, the six months after the Islamic State (IS) attacked her hometown could not have been crueler. Her mother and three younger sisters were taken from the village of Tel Qasab, near Sinjar, as spoils of war by the extremists, who control territory across Iraq and Syria. After five months in captivity, each day not knowing if they would live to see the next, Ibtisam was freed along with some 200 other Yazidis, most of them elderly, sick or disabled.

Two of her sisters, however, continued to be held captive. Asked why she thought they had been kept while she was released, Ibtisam lowered her eyes and stared at the floor in embarrassment. She paused for a moment before responding, “They were more attractive.”

Ibtisam and the others who were released are now in Lalish, site of the holiest shrine for Yazidis, whom IS consider to be devil worshippers. Unlike Christianity and Judaism, the Yazidi religion is not acknowledged in the Quran.

Only the Yazidi community can fully comprehend the depth of the tragedy that has befallen them. Hundreds have been massacred, thousands remain in captivity and the majority of the Yazidi minority has been made homeless by IS.

Around 20 kilometers (12.4 miles) from Lalish in the city of Dahuk, a family has taken in three underage girls who were used by IS members as sex slaves for approximately three months. Erivan Mehdi, whose family is caring for them, said, "They cry a lot, and they are often lost in their own thoughts." One of the girls, Besma, a pseudonym, agreed to be interviewed on the condition her true identity not be revealed. Erivan accompanied her.

Besma, 15, had been in Sinjar town when IS overran the area on Aug. 3, 2014, and gunned down one of her brothers. Nine years earlier, in the midst of sectarian warfare in Iraq, Besma’s father had disappeared without a trace on his way to Mosul.

When IS attacked, Besma's family had asked one of their Sunni Arab neighbors for help, but instead they were turned over to the militants, who rounded up Besma, her mother and a surviving brother, along with some 500 other Yazidi residents.

They were then loaded onto four buses and transferred to the IS stronghold of Tal Afar, where the militants kept them for two days, feeding them eggs, cucumbers and tomatoes. Besma said they were not mistreated at that time. Yazidi men, however, were separated from the group, and Besma was transferred with her mother and younger brother to a prison, which an older women recognized as Badush, northwest of Mosul.

Besma, who recalled her ordeal in great detail, said the militants served breakfast at 9 a.m., later followed by lunch, which typically consisted of cucumbers and tomatoes. After midnight, the captives were given a dinner of grapes and bread.

The militants repeatedly insisted the Yazidis convert to Islam, Besma said. On the ninth day in Badush, coalition airstrikes targeted an area near the prison, shaking the ground beneath them. "Everyone was crying and asking God to finish us off at once, rather than endure the terror," she said.

At different stages, young attractive girls were separated from their mothers and then taken away by the militants. The rest were moved from place to place and forced to convert to Islam and pray. Besma saw foreign, Kurdish and Arab fighters and even some Yazidis helping IS.

Besma was taken to Mosul, where she was eventually separated from her mother and brother and moved to the town of Baaj, near the Syrian border, with around 100 other girls, who had been picked out by IS commanders and fighters. She was one of six girls to be selected and taken to Rambusi village, near Sinjar town.

In Rambusi at night, IS members took turns “bringing the girls back to their residence,” Besma’s euphemism for being raped. She remembers the names of three IS members who systematically raped the girls: Abu Hussein, Abu Ali and Abu Abdullah (whose nickname was Abu Shadad).

One evening, around two weeks after Besma arrived in Rambusi, 15 IS militants, including her captors, gathered in a house on the edge of the village. Besma and another girl, Berivan, decided to make a run for it. “We served them okra stew and rice, and all of them sat down to eat,” Besma said.

While the men ate, Besma and Berivan, 18, walked quietly to the front door of the house, grabbed a Samsung mobile phone that one of the fighters had left to recharge and stepped into the darkness outside. Berivan called her brother to ask for his help. Over the next 48 hours, Berivan’s brother and a few other Yazidi fighters guided the two terrified girls to safety.

There were many frightening moments along the way. At one point, one of the militants, Abu Sarhan, called the phone the girls had taken. "Where are you, Berivan?” Besma remembers Abu Sarhan asking. The militant, who had repeatedly raped Berivan, warned the girls they would soon be caught. They switched the phone off and pushed on.

The two girls kept going until they reached Mount Sinjar, where several Yazidi fighters received them. One of the men, Khero, spoke by phone to Al-Monitor, recalling the two exhausted girls walking up the mountain one day in late September.

Besma and Berivan are now safe, but their ordeal is far from over. Besma’s mother and brother remain missing. "Not a day passes without her crying," Erivan said. Besma spends her time watching videos released by IS, listening repeatedly to a Kurdish folk song about a mother and weeping while looking at photographs of her two missing brothers.

Since early December, Kurdish peshmerga forces and Yazidi fighters backed by coalition airstrikes have retaken large parts of Sinjar and the Mosul dam area east and west of the Tigris, some 4,000 square kilometers (15,444 square miles), according to officials from the Kurdistan Region Security Council. With the Kurdish forces gaining ground, there is a possibility that one day the Yazidis might feel confident enough to return to their ancestral homeland.