The Lebanese state has yet to secure a continuous electricity supply to its citizens, nearly 20 years after the end of the civil war, which has led to heavy debts and will incur a major disaster in the near future. 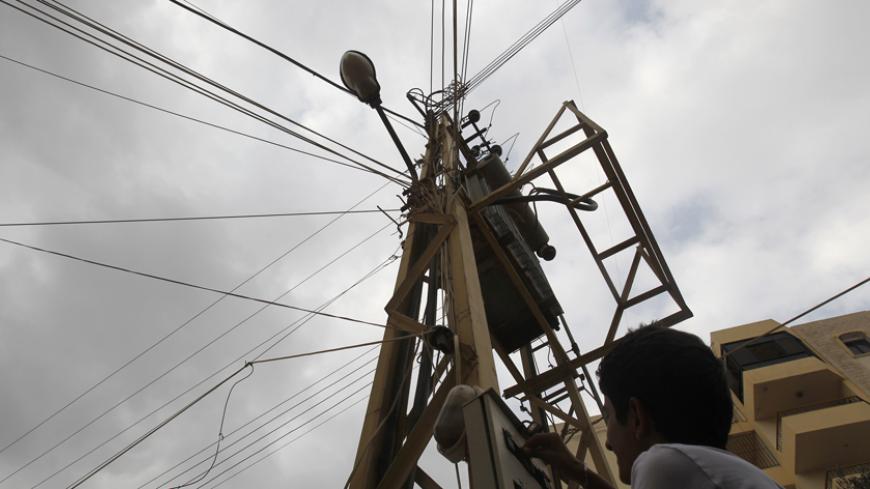 A youth switches on a private power generator after general electricity was cut in an area south of Beirut, Sept. 22, 2011. - REUTERS/Sharif Karim

It's hard to believe that after nearly a quarter-century since the official end of the civil war in Lebanon (1975-90), the country is still failing to re-secure a constant power supply to its citizens.

What makes matters worse is that from 1992 to 2014, Lebanon has paid out about $27 billion to the state electricity company Electricite du Liban (EDL) to no avail, according to a study — of which Al-Monitor secured a copy — conducted by an economist for government officials.

The electricity crisis in Lebanon summarizes the suffering of an entire state and an entire country that has been beset by negligence, corruption and incompetence of governance.

Those following the Lebanese situation are well aware that securing the power supply to the people in Lebanon is a major national issue that has been addressed by successive governments, but without making any conclusive progress.

Nevertheless, the issue of the power supply has started, in recent years, to weigh on the overall public treasury in the Lebanese state, as well as on the Lebanese economy as a whole.

In terms of figures, according to the same study, the total accumulated deficit of EDL is about $27 billion — an unusual figure.

To grasp the magnitude of this deficit, one ought to compare it to other economic figures in Lebanon. For instance, it constitutes about 40% of the total Lebanese public debt, estimated at about $68 billion at the end of 2014, and it also accounts for roughly 55% of the gross national product (GNP), which is estimated at about $49 billion for the same period (this deficit falls on the annual budget of Lebanon’s treasury).

Since EDL is a public institution and securing a minimum supply of power is a governmental duty that no Lebanese authority can evade, this deficit is worrying. Thus, the deficit in the Lebanese electricity sector constitutes about a third of the state budget on an annual basis — a rate that has become almost constant in the last three years.

The Lebanese state pays over $2 billion per year ($2.1 billion in 2014) to cover electricity losses from the state treasury, which leads to bad debts in favor of the EDL. The worst part is that despite all these huge figures, Lebanon continues to suffer from ongoing electricity cuts.

The electricity supply by the EDL does not, at best, cover two-thirds of a 24-hour day. This is not to mention the emergency breakdowns and that the cost of production of electricity energy is estimated to be the highest in the world (at 22.73 cents per kilowatt-hour, according to the same study).

This chronic situation has pushed the Lebanese to resort to private power generators. Traders, usually influential people or those backed by politicians in their home towns or neighborhoods, purchase large power generators to supply households. They supply homes with power using the official public distribution networks in exchange for monthly subscription fees, which for nearly two decades has been a blockbuster trade in Lebanon.

The study estimates the subscription cost by the Lebanese is $1.2 billion annually, which goes to the power generators who are politically backed and who constitute the "class of generator owners."

The repercussions of this phenomenon can be felt in other economic sectors including the production sector, which therefore has an impact on the GNP.

This is not to mention the serious environmental impacts caused by the existence of about half a million private power generators, including private generators for homes and private-joint generators for groups of households. They operate without consideration of the environment and cause great pollution.

What are the reasons behind this growing national disaster? For many years, studies have been suggesting endless reasons for this crisis, including the situation of the power production plants. They are expensive to operate, given that they are old and not maintained properly, and also face a challenge in distribution, transport and technical waste because of poor network conditions.

In addition, there are the issues of administrative corruption including the EDL’s failure to collect owed bills from subscribers, in light of the security conditions in some areas in the Bekaa Valley, in northern Lebanon and in the Palestinian refugee camps. According to the study, the cumulative total of EDL’s uncollected bills amounted to nearly $1 billion by the end of 2014.

A quarter of these bills are owed by the Palestinian refugee camps in Lebanon, whose sum has risen in the last three years by more than a third. This overall figure is expected to rise in the coming years, given the presence of more than 1 million Syrian refugees in Lebanon, some of whom are illegally consuming electricity.

Lebanon is facing a multitude of military, security and political problems. However, its economic burdens are no less dangerous than the other challenges the country is facing.

The electricity issue stands at the forefront of Lebanon’s economic crisis — an issue that started to take a dangerous turn — whose pattern has not changed over the past few years: great financial losses plague the government with ongoing power cuts.

In light of the Syrian displacement, this crisis is likely to exacerbate, causing financial failures at governmental, social, economic and environmental levels.