Sydney hostage-taker Man Haron Monis had long been wanted by Iran for fraud. 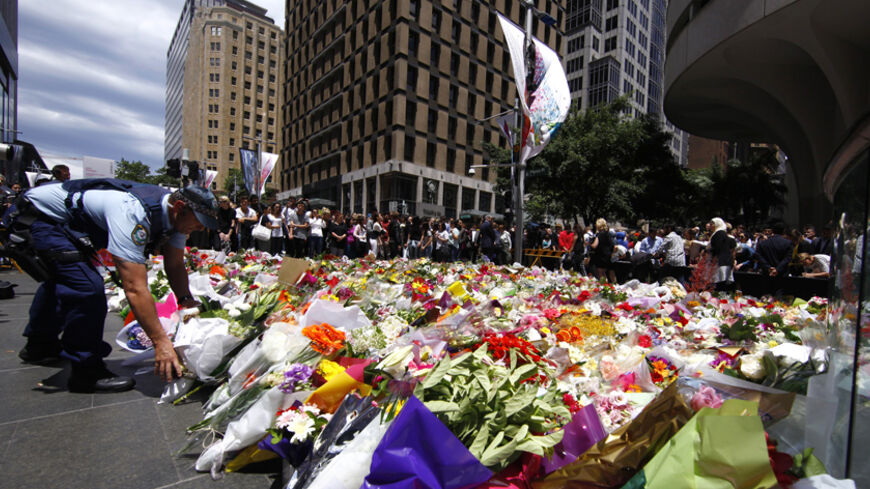 A policeman lays a floral tribute with thousands of others near the cafe where hostages were held for over 16 hours, in central Sydney, Dec. 16, 2014. - REUTERS/David Gray
Arash Karami
@@thekarami
December 16, 2014

Man Haron Monis, the gunman behind the 16-hour hostage standoff in Sydney, Australia, resulting in the deaths of two individuals and himself, was well known to Iranian authorities. The self-styled "sheikh," who left Iran for Australia in 1996, had abused Australia’s political system to gain immunity from prosecution in Iran, where he was a wanted man.

According to Iran’s Foreign Ministry spokeswoman Marzieh Afkham, “The psychological history and condition of this individual, who for more than two decades was a refugee in Australia, was repeatedly presented to Australian officials.”

Afkham did not elaborate, but Haron Monis’ history while in Australia paints a clear picture of him as unstable and a charlatan posing as a religious man.

Before changing his name, Haron Monis was Mohammad Hassan Manteghi. As early as 2008, the Australian Shiite community warned federal agents he was an imposter posing as a Shiite ayatollah (in fact, they said there were no ayatollahs in Australia at the time) and no one had ever heard of the two names he was using, "Ayatollah Borujerdi" and "Sheikh Haron." He was, however, in the news at the time for harassing family members of soldiers who died fighting in Afghanistan.

Before his conversion to Sunnism to take up the cause of the Islamic State group, Haron Monis had faced a number of legal battles, including numerous charges of sexual assault — under the guise of religious "healer" — and accessory to the murder of his ex-wife in Australia.

Fars News Agency reported that Iran had requested via Interpol that Haron Monis be extradited in 1996 for “heavy financial fraud,” but that the request was denied when Haron Monis claimed that he would be persecuted in Iran for his “liberal” views. He was eventually granted political asylum in Australia.

A search of Interpol did not bring up anyone by the various names he used, but foreign-based Persian-language Manoto reported that Haron Monis was wanted in a $200,000 fraud case. Islamic Republic News Agency (IRNA) also claimed that Haron Monis had been wanted by Iran. Interestingly, while most Western media outlets published images of Haron Monis dressed in traditional Shiite clerical garb, IRNA's choice shows a man in sunglasses wearing a white jacket over a black shirt with white stripes and white pants.

Australian media outlets had long bought into Haron Monis’ branding of himself as “liberal.” In January 2001, Australian Broadcasting Corporation’s Radio National program profiled Haron Monis, before his name change: “While in Sydney, we talk to Ayatollah Manteghi Borujerdi, an Iranian cleric espousing a liberal brand of Islam — dangerously liberal, as his views have led to his wife and two daughters being held hostage in Iran.”

The Fars article, headlined, “The con artist who was not returned to Iran under the excuse of ‘political asylum,’” also criticized the Western media for emphasizing his Iranian nationality.