With the high number of wounded individuals during the last Israeli offensive against Gaza, doctors were often unable to attend to pregnant women giving birth or experiencing complications before and after deliveries. 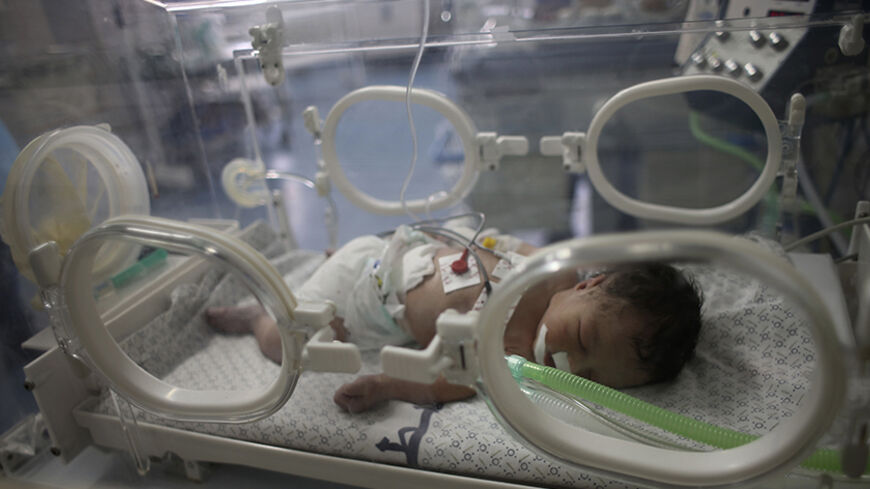 Palestinian baby girl Shayma Shiekh al-Eid lies in an incubator after doctors delivered her from the womb of her mother, whom medics said was killed in an Israeli airstrike, at a hospital in Khan Yunis in the southern Gaza Strip, July 27, 2014. - REUTERS/Ibraheem Abu Mustafa

GAZA CITY, Gaza Strip — In labor and finding the pain unbearable, Asmaa Faraj, a 26-year-old mother, was unable to deliver her first baby in a hospital. Instead, her mother took control of the situation and helped her give birth at home during the recent Israeli war on Gaza.

“The shelling was heavy on the night of July 18. Going to a hospital was a great risk. My family could not flee the house, so we remained there, to keep my baby safe. We tried to call the ambulance to pick us up and take us to a health center, but they were all busy with the wounded,” Asmaa told Al-Monitor. She said she had no other choice but to let her inexperienced mother help her to deliver.

Asmaa’s mother, in her 50s, said she had never imagined that she would have to help her daughter give birth someday, as she had never before delivered a baby. “I used a kitchen knife to cut the umbilical cord and threads from clothing to stitch up the wound. There were great risks, but I pulled it off,” she said.

While Asmaa was lucky enough to hold her first child, whom she named Bakr, in her arms, Rasha Abu Awdah was not. She died, at the age of 30, two hours after her baby was delivered.

Abu Awdah’s husband, Nidal, told Al-Monitor, “My wife had gone through hard times when she was pregnant with our baby. Our house was bombed while we were inside. Although we miraculously survived, my wife suffered severe bleeding as a result of the bombing and underwent emergency surgery in al-Awda Hospital, north of Gaza. Doctors managed to save the baby, but she did not survive.” Rasha left behind six children in addition to the newborn infant, who opened its eyes for the first time in the arms of its aunt, who is raising him.

According to Sawsan Hamad, head of the Women and Children's Health Department at the Ministry of Health in Gaza, “About 250 women died during the Israeli war, 16 of whom were pregnant, in addition to four others who died because of complications after birth and lack of necessary health services. This is not to mention that 500 pregnant women were wounded because of the shelling and displacement.” Hamad added, “These figures are not final. These were the cases we could count, but the figures seem to be much greater. Reproduction clinics for women were severely affected. Most health services for women as well as family planning clinics were disrupted.”

A study by the National Program for the United Nations Population Fund (UNFPA) reported, “Six maternity units suspended their operations due to the destruction of the hospitals.” In addition, only 50% of primary health care centers were in operation during the war, because of destruction and workers not being able to reach their places of employment. Moreover, pregnancy care services declined by more than 70% during the month of July, with the intensification of Israeli military actions. Family planning services also declined by 60-90% for the same period. According to Hamad, doctors were unable to attend to patients at the few health centers that remained operable because they were busy treating the wounded.

Maryam Shaqoura, head of the Women’s Health Center in Gaza, stressed that pregnant women were subjected to risks during the war, due to the lack of necessary services and care, that increased the chances of abortion, premature birth or complications after birth. In light of the security situation, pregnant women did not have the chance to go for check-ups and follow-ups at reproduction centers.

“They had to walk long distances and carry heavy things due to displacement. This is not to mention the bombing of hospitals and unavailability of doctors, who were preoccupied with treating the wounded. Women’s special health services and care were absent before and after birth, in addition to a lack of proper food for women and newborn infants,” Shaqoura told Al-Monitor. She said that some of the women who managed to give birth in hospitals or private clinics did not spend enough time there to receive the necessary health services, as they were forced to evacuate immediately after the birth, which put them in great danger.

The UN study reported, “Maternity units in hospitals were used to treat the large numbers of wounded, which led to the decline in services provided for pregnant women. Women were evicted from hospitals immediately after giving birth, even in the case of caesarean sections.” According to Shaqoura, dozens of pregnant women gave birth in shelters without receiving proper health care and in rooms accommodating tens of displaced people.

Shaqoura explained, “Moreover, pregnant women lacked the proper and adequate amounts of food necessary after giving birth. They used to eat one kind of food without any meat included, which was provided by local and international institutions for the displaced. This increased their chances of suffering from malnutrition.”

The war may be over, but the effects continue to be felt.