Many of the Palestinian wounded have had their limbs amputated and face struggles as the Gaza Strip rebuilds. 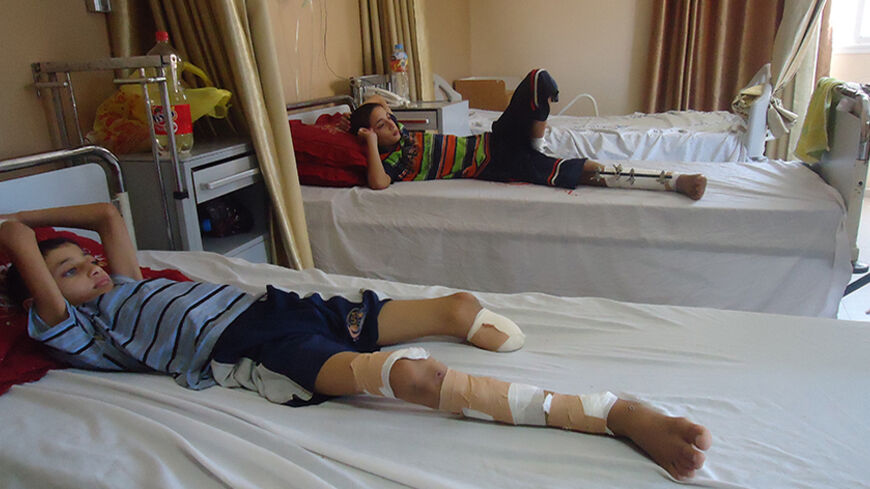 KHAN YUNIS, Gaza Strip — He moves around the hospital, the smile never leaving his face. His boyish attitude is translated by his spontaneous hand gestures. When he gets tired, he rests on his bed, near his older brother who was also wounded during the same airstrike. He finally returns to his wheelchair. Ibrahim Khattab, 9, has lost his left leg.

During Israel’s 51-day war on the Gaza Strip, which ended on Aug. 28, Ibrahim and his brother Wassim, who lived in Deir al-Balah in the center of Gaza, left their house and were wounded by an Israeli airstrike, causing the loss of Ibrahim’s left leg and critical injuries to Wassim’s legs.

Wassim, 15, the eldest, was always passionate about soccer, until Israeli drones launched rockets and shattered his dreams with a permanent disability.

Despite his severe injuries, Wassim told Al-Monitor with eyes full of hope, “I wish things would go back the way they were. I wish I could play with my friends again, especially football because I love it so much. I cannot wait to go back to school and resume class in 10th grade.”

At the Red Crescent Rehabilitation Center in Khan Yunis, southern Gaza, Al-Monitor met the Khattab brothers before they left for Germany to complete their treatment. Ibrahim, the youngest in his family, whose leg had been amputated, moved around the hospital in his wheelchair assisted by his father. Wassim seemed to be holding up better than his father and little brother. However, he expressed his fears for his future, especially since he sees his peers walk while he cannot.

Ibrahim innocently asked, “How will I be able to live later on? My leg, which I once used to walk and play, is now amputated. My only mistake was that I was going to my uncle’s house. How will I go to school now? How will I play with my friends?”

Ibrahim is asking questions day and night to which he does not have the answers. He has lost a lot of weight and weighs only 19 kilograms (42 pounds).

Khaled Khattab, the father, tries to help his sons adapt to their new life. He told Al-Monitor, “I try to be there for them so they can leave the hospital with as little damage as possible. I help Ibrahim use his artificial leg and try to find the best treatment for Wassim.”

Khaled’s economic situation is difficult. He has been unemployed for over eight years, due to the Israeli siege on Gaza, and the burden is now heavier with the daily fees of his sons’ treatments.

The suffering experienced by the Khattab brothers is endemic across the Gaza Strip.

According to statistics published by the Ministry of Health in Gaza, the death toll of the Israeli war on Gaza includes 540 child deaths, which represents 25% of the entire death toll. Over 3,000 children were injured, some of whom have had their limbs amputated or are in critical condition.

The head of the Physical Rehabilitation Unit at the Ministry of Health, Ayman al-Halabi, said that suffering from injuries can be a difficult experience for children since they are just starting to grow up. A large number of children cannot understand what has happened to them and take a long time to cope with their situation. Their relatives may also be injured or killed from the attacks, which worsens the psychological effects they suffer.

Halabi told Al-Monitor, “When the injuries are severe, the patients need medical care and long rehabilitation sessions to stabilize their condition. They also need psychiatric treatment to overcome the trauma, in addition to their increasing economic needs.”

“For example, the children whose limbs were amputated are at the first stage of growing up, which means that both their weight and height are constantly changing. Thus, they need to change the artificial limbs every six months or according to the evaluation of their condition. This puts both the children and their parents under a lot of pressure,” Halabi said.

Due to Gaza’s lack of hospitals that manufacture artificial limbs, the situation is more difficult, since the families whose children have amputated limbs have to cover extra fees to buy new prostheses.

“The war, the destruction of houses and the Israeli blockade on the Gaza Strip have largely affected the lives of Gaza inhabitants economically. The parents of a child cannot change their child's prosthesis every six months because it is very expensive, not to mention that a person who underwent such an operation outside Gaza would need to revisit the place where they were treated. This is also very costly and a burden for an already poor family,” Halabi said.

We left Ibrahim and Wassim inside the hospital playing, and dreaming about future lives that have been scarred by the latest war.