A vegetarian diet amasses more and more supporters in Israel, but is this a genuine change of heart, a fashionable trend or the latest outlet for an “acceptable” aggressiveness? 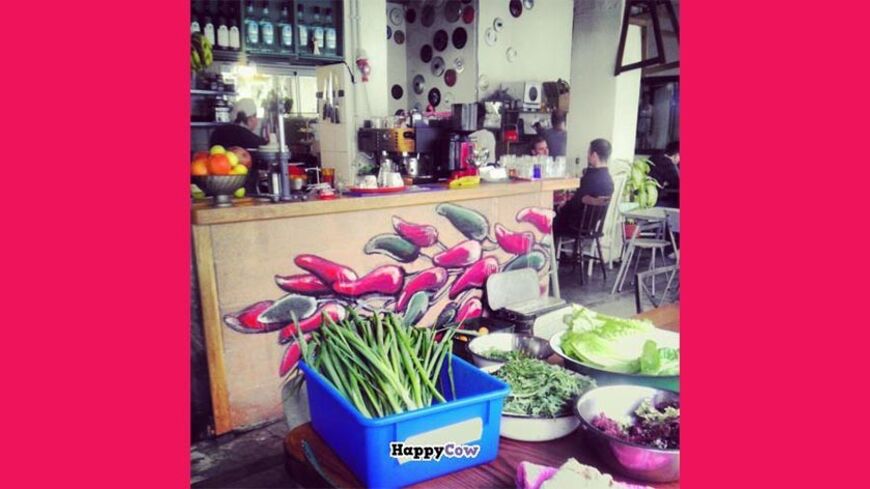 Zakaim was the first restaurant in Tel Aviv that served only vegan food. - happycow.net

It began with Zakaim, the first restaurant in Tel Aviv that dared to serve only vegan food, but of the kind that would meet the standard of the gourmet restaurants that fill the city. Before that, there were quite a few restaurants that joined the Meatless Monday initiative including, believe it or not, the Knesset cafeteria — although, according to Inbal Klein, a public relations professional specializing in food, a recent survey she conducted discovered that only a few of the restaurants that joined the initiative so eagerly continue to have Meatless Monday, while most of them just took advantage of the image boost and continued to serve meat.

Some of the leading restaurants in the city, such as Orna and Ella, a Tel Aviv landmark, or the Asian temple Thailand House have made a point of offering vegetarian and vegan options on their menus for years. Recently, even The Brasserie, a legendary bistro that keeps winning the title for the "best hamburger in town," added a page of vegan options to its well-designed menu. Even the famous Domino’s Pizza chain has offered its own vegan pizza.

And we must not forget Israel’s “national foods,” falafel and hummus, adopted from the Arab states surrounding us. They are both a vegan option (by foregoing the egg, of course).

But it seems like nothing threw the Tel Aviv culinary scene into turmoil like the decision by Nana Schreier to make the menu of her hedonistic paradise, the Georgian restaurant Nanuchka, completely vegetarian. After all, this was a place where the vodka flowed as freely as water, and the khinkali dumplings, stuffed with meat and cheese, flowed from all over (just before the guests got on the bar to dance).

Quite a few people see these moves as a cynical act intended to boost their image by conforming to the most current trend, rather than to any dictates of stomach and conscience. “No restaurant that turns vegan does it because they are too successful,” says a source deeply involved in the Israeli food scene. “Nanuchka was never known for the quality of its food, but rather for its atmosphere. It was a business move by a restaurant that had already peaked and needed to reinvent itself. If it could have made a mountain of money selling pork ribs, it would have kept on doing that.”

Schreier says differently. She claims that she herself became a vegan, and that her decision was far from some public relations gimmick. “I did it because my ability to suppress what I actually felt was shattered. My image of the cow was switched from an animal smiling all the way to the barn, to one of indescribable suffering. I realized that I was eating and feeding other people corpses.”

“I have yet to see vegan Georgian cuisine,” laughs Dael Shalev, author of the Hebrew language book The Prehistoric Secret: Living the Way Your Body Wants, who makes sure to use his nickname, “Fred Flintstone.” He is called that because of his theory that people must keep to a diet that resembles the diet of Paleolithic man, which included a lot of meat.

Schrier gets very upset about this contention, which she has apparently heard quite a bit during the last three weeks in which her restaurant has been vegan. “I’m sick of stereotypes about Georgians,” she says angrily. “People from Georgia eat lots of vegetables. The most popular item on our meat menu was the vegan antipasti, which remained the same on the new menu. In our village, we ate vegetables, pastry products and stuffed vegetables. Meat was rare, because we weren’t rich. And in general, Georgian Christians are careful to eat only vegan foods half a year out of every year.” She also claims, “I never lacked public relations. My restaurant was at the height of its success. Vegan food is not a trend. In just a few years, no one will be able to eat meat like we do now.”

Her last statement has become very popular in Israel. It is as if there were no diplomatic conflict, no economic crisis and no religious tensions in the country. The Israeli plate has become the new battlefield, in which meat-eating carnivores face off against those who avoid foods derived from animals. The extremists of this latter group claim that just as slavery was made illegal, the use of animals for food will be banned at some point in the future. Nor do they have any qualms about the means they will use to inform the public about the cost people pay, morally and health-wise, for eating animal products. They have set up decapitated animal heads in crowded public places throughout the city, and they have branded the number 269 on themselves with white hot iron (honoring the number of a calf that an extremist faction of the vegan movement saved from slaughter).

The Israeli Internet is full of websites with practical information for anyone who wants to stop eating meat, including a Facebook page for vegan recipes, with more than 15,000 followers, and the popular website Vegans Have More Fun.

At the same time, however, other sites that attack this vocal new trend, and even ridicule it with caustic satire, are flourishing. For example, the Facebook page Vegans That Make Me Sad has received more than 20,000 “likes” by showing pictures of vegan food that no one would want to put in their mouth.

The person who wants to put a damper on this enthusiasm is Klein, who has reservations about the scope of this current trend. “It’s just 2 square kilometers [494 acres] in the center of the Tel Aviv swamp,” she says. “It has gone from being a fantasy of hippies to a brand name among the in-crowd sitting in The Brasserie. It is a very small percentage of the population. Last week, I went to a restaurant in [the southern city of] Ashdod, and there wasn’t a single vegetarian offering on the menu, never mind vegan. When you look outside the Tel Aviv bubble, you’re in a different country.”

According to her, what has happened over the past two years is that “veganism became sexy. It was never like that. We always spoke about meat as if it was sexy. You’d see pictures of meat dripping blood and say, ‘Mmmmm, I want to put that inside me.’ Today, being a vegan is sexy. You just can’t talk about your passion for meat among certain crowds.”

One person to agree with her is Ariel Cohen, chef of the Tel Aviv hall of meat NG, who has been offering a “barbarian meal” to his clientele for years. This consists of enormous servings of roasted meats and alcohol that flow freely to a crowded table, packed with meat lovers. All that is missing is a knife and fork. The diners devour this meal just like the gods of meat intended: with their hands. “There’s the market and there’s Tel Aviv, and Tel Aviv makes a disproportionate amount of noise. The ratio of gourmet restaurants to shawarma bars, steakhouses and workers' restaurants is huge, and it is in favor of the latter. That’s where the real testing ground is, and there, they are absolutely not vegans,” says Cohen.

Klein and Cohen may be right in their interpretation of the facts, but much to the surprise of anyone who has spent time in any park on Israel's Independence Day, when the smoke from barbecue grills can be reminiscent of a dense fog, Israel is actually a leader in the percentage of its population that is either vegetarian or vegan.

While it is true that the last reliable survey on the topic was conducted by the Ministry of Health in 1999-2001, even then 9.8% of women and 7.2% of men declared themselves to be either vegetarians or vegans. A later poll from 2004, conducted among young people, found that 11% of boys and 20% of girls identified as either vegetarians or vegans. Another poll, published by the Panels Institute in advance of the new season of the reality cooking show "Master Chef" in January 2014 found that 8% of Israelis define themselves as vegetarians and 5% as vegans. In that same poll, 13% of the respondents said that they are considering adopting a vegan or vegetarian lifestyle in the near future, while almost 25% said that they had reduced their meat consumption in the last year.

The Hebrew translation of a video by the guru of vegan animal liberation activism, Gary Yourofsky, was seen by 875,000 people. The censored version, in which some of the more brutal images are blurred, was seen by another 460,000 people. It is therefore no wonder that more and more restaurants want to hitch a ride on this horse all the way to the bank.

“Some people see the potential and add vegan offerings to their menus so as to reach a wider audience. They are really thinking in economic terms,” says Hila Zakaim, one of the three siblings who manage the Zakaim vegan restaurant. “It’s not like that with us, even though it doesn’t really matter what the motives are, at least in my opinion. What matters is that it is happening.”

While the followers of veganism look on in awe at the change taking place in Israeli society, Cohen of NG is more skeptical. “At the end of the day, it is a trend that doesn’t hold water,” he says. “All that will remain of it will be a vegetarian item on the menu for the girl from Tel Aviv. People adhere to veganism without having researched the concept in depth. They do it only because it’s in the headlines. In another 10 years, they’ll be doing the same kind of demonization that Yourofsky is doing to meat eaters, to the killing of snails during the wheat harvest.”

Demonization is a key word for Shalev, or Fred Flintstone. He actually thinks that this vegan trend will not disappear. “It is different from other trends,” he says, “because it connects not only to health concerns, but also to ethics and ecology. People adopt it because they connect to the romantic message, and they feed off of lies and propaganda.”

Shalev goes on to give two reasons why he thinks this trend is dangerous. First of all, he claims, it is damaging to the human body (“Go visit the vegan forums,” he suggests. “All they talk about is, ‘How do I get rid of this flatulence? What nutritional additives should I take? I’m weak. I stopped having my period,’ etc.”). Second, he is very concerned about the violent approach adopted by some of the vegans, like Yourofsky. “The guy called for the rape of women wearing fur. The morality here is warped, and famous Israelis bring this distorted idea that anyone who eats meat is a murderer into the Israeli discourse as a legitimate claim. When they call a chicken coop Treblinka and a barn Auschwitz, the message is that the people responsible for them should be attacked.”

According to Shalev, radical vegans respond daily on his blog in increasingly violent terms, even saying things like, “Nazis, die!” In contrast, meat eaters have coined the term “Veganazis” for those extremist factions that avoid foods derived from animals. “Israeli society is the kind of society where it is easy to hate,” says Shalev to explain this bitter conflict. “And the vegan trend isn’t based on compassion and love, either. They are people who love to hate, and they have a new object of their hate: meat eaters. We’re all violent. They just took their violence to a whole new level.”