Tehran and Tel Aviv may share an interest in stability in Gaza. 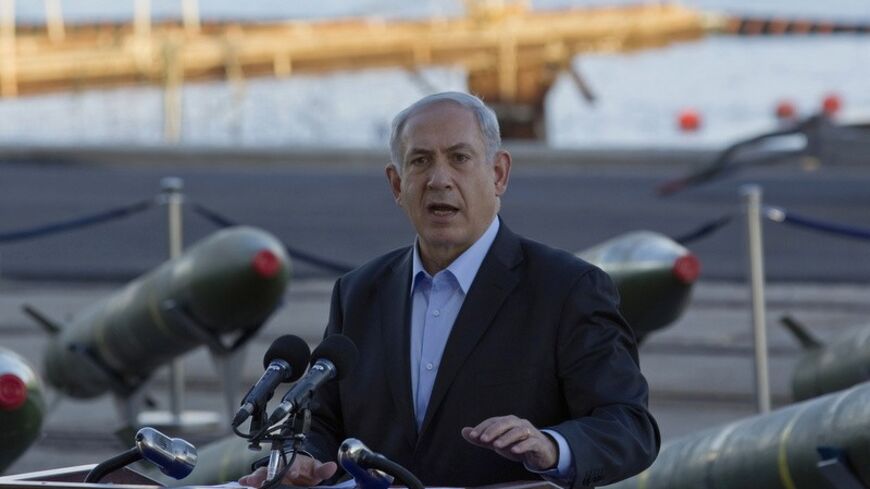 Israel's Prime Minister Benjamin Netanyahu speaks to the media in front of a display of M-302 rockets, found aboard the Klos-C cargo ship, at a navy base in the Red Sea resort city of Eilat, March 10, 2014. Israel said the weapons were Iranian-supplied and were to have been delivered to guerrillas in Gaza. - REUTERS/Amir Cohen

Gaza, the perennial stepchild of US-led diplomacy, stubbornly refuses to accept its second-tier status. Less than one month ago, Israel and Palestinian forces operating in Gaza each sought to remind the world in their own way that, even more than the West Bank, Gaza remains a tinderbox of often violent, competing aspirations that retain the ability to sabotage an unlikely Israel-PLO rapprochement.

Reports earlier this week suggest that as part of an Israel-Turkey resolution of claims resulting from the Mavi Marmara incident in May 2010, Israel will facilitate entry into Gaza of 500 trucks of construction materials along with 70 trucks containing electrical and communications equipment necessary for the construction of a Turkish-sponsored hospital south of Gaza city.

But perhaps most interesting is an extraordinary set of Gaza-related considerations involving Hamas, Iran and Israel.

In politics, nothing is forever. Today both the Rouhani government and Hamas, each for its own reasons, are interested in a resumption of ties. It will be difficult — if not impossible — to reestablish the sense of revolutionary common purpose that characterized the failed “resistance front,” but each has its own set of interests to promote. Hamas is trying to recover from its bad bet on Egypt’s ousted Ikhwan and its broader failure to accurately diagnose the inferior power of the Sunni revolt in Syria. Hamas needs to replace the patronage and strategic depth lost when Cairo turned out the Morsi government — a move that has evolved into a wide-ranging campaign against the Ikhwan throughout the Arab world. Tehran, for its part, views a workmanlike association with Hamas at the very least as an insurance policy against charges that it is pursing a strictly sectarian regional agenda and as continuing evidence of its pretentions to broader influence throughout the Middle East.

Recent discussions in London and Ramallah suggest the following: Iran will ask for its "pound of flesh" to reinvigorate ties with Hamas, very likely in the Syrian arena. The Revolutionary Guards in particular are still smarting from Hamas’ support for Assad’s (and Iran’s) enemies there. There has been a parade of visits to Tehran seeking to restore a measure of Iranian support for the hard-pressed coffers of the Haniyeh government in Gaza, now feeling the unprecedented effects of the end of the tunnel economy. Hamas is particularly keen to declare the restoration of links with a visit by Hamas leader Khaled Meshaal to Tehran.

In addition to these rather traditional considerations, there is also an extraordinary new realpolitik dimension to the dance between Tehran and Gaza, one rooted in both the current US-Iranian efforts to turn a historic new page in their relations and in Israel’s open embrace of Hamas as the best of Israel’s bad options in Gaza.

The expected resumption of a Turkish aid link to Gaza is a product of the same set of Israeli considerations that are on offer in the resumption of Iranian aid to Gaza. True, there is compelling proof that Iran and Israel remain bitter foes, and not only in Gaza. But it is also the case that Iranian and Turkish aid will in some measure substitute for the now-ended honeymoon between Cairo and Gaza, reducing Israel’s responsibility for maintaining Gaza on the “diet” imposed by Israel a decade ago, stabilizing Gaza’s perilous economy and enhancing Hamas’ control in Gaza.

Iranian economic support for Gaza today represents a net gain for Israel ... and for Washington. When Israel’s prime minster Ariel Sharon left Gaza in 2005, he expected Egypt to swallow the burden of feeding the poverty-stricken area’s 1.7 million Palestinians. Hosni Mubarak, vulnerable to charges of abandoning Gaza, blinked, and the tunnel economy was born.

This system worked until July, when President Mohammed Morsi was ousted. General Abdel Fattah al-Sisi closed off the tunnels and embarked on a general offensive against Ikhwan/Hamas — one and the same to him and evidently to most Egyptians as well. Since July, Cairo has insisted that Israel open up its side of the border and assume the burden of feeding Gaza. The Netanyahu government has done so, in its own minimalist fashion.

In parallel with efforts by Secretary of State John Kerry to restore the PLO’s standing as the party of Palestinian liberation, Israel has declared its interest in a certain measure of stability in Gaza — both in economic and security terms. The impending Turkey-Israel deal on Gaza imports reflects this as well. In both of these domains — economy and security — Israel has made it clear that Hamas (not Abbas or Mohammed Dahlan, and certainly not assorted jihadis) is its address in Gaza.

Former Sharon national security advisor Giora Eiland has written, “In this situation, and in order to achieve our own interests, it is Important that Gaza has a stable regime with political responsibility. IDF [Israel Defense Forces] Southern Command Chief Sami Turgeman said so in the past, and he was right. The only possible stable regime is Hamas, so Israel has an interest in Hamas being in power.

“Moreover, from Israel's perspective, Gaza is a state for all intents and purposes because it fulfills the four conditions for that: It has recognized borders, it has a central regime, it has independent foreign policy and it has its own military. The more Gaza is a state, the more we will treat it as one; the more leverage we have with it — leverage that could force it to maintain the sought-after quiet; our main interest. ... Policy must be based on interests and not on ideas, and our interest is a neighborly relationship based on deterrence.”

This environment has produced an ironic set of overlapping interests among otherwise bitter antagonists. Iranian financial support for Hamas/Gaza keeps the lid on Gaza, thus supporting Israel's current interest as well as that of Hamas.

Iran's calculations may be changing as well. Tehran has its eye on the ball — P5+1. “Letting off steam” like in Gaza’s self-limited, tit-for-tat dust-up in early March is one thing, but Iran has no interest in any disruption prompted by another round over Gaza that threatens to polarize relations with Washington — or Israel — at a time when Tehran and Washington are anxious to establish common ground. Israel’s failure to excite much interest over its interception on March 5 of the Klos-C, carrying Iranian weapons, is an instructive case in point.

The Obama administration, for its part, has no desire to put out another fire in Gaza, whatever the source. Nor is it interested in discovering another rationale for sanctioning Iran, given both the nuclear talks and Syria. So everybody, including Gaza's long suffering population, stands to "win" if Gaza’s battered economy is permitted to improve.