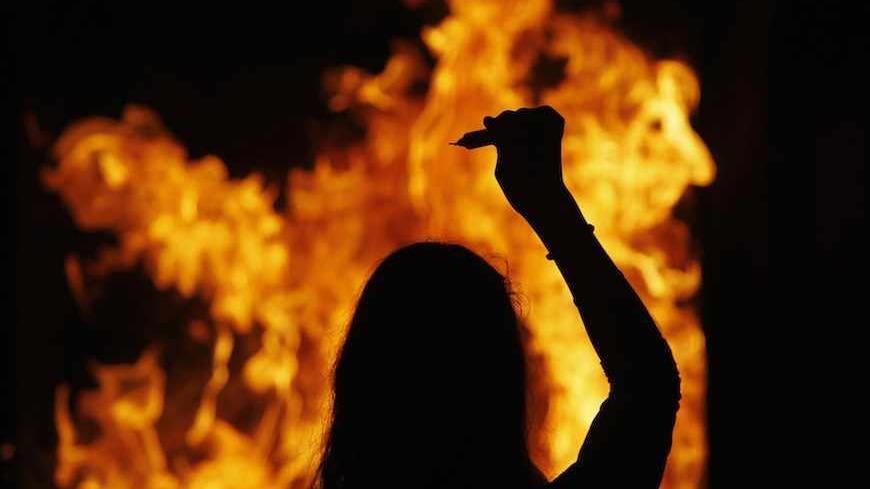 A Jewish worshipper throws a candle into a fire during a ceremony marking the 19th anniversary of the death of Rabbi Shalom Ifergan at his gravesite in the southern town of Netivot, June, 13, 2013. - REUTERS/Amir Cohen

It’s not clear when exactly the town of Netivot became shrouded in religious holiness. As the towns of the south have been gradually returning to their faith over the last two decades, Netivot has gained a special status. Tens of thousands of believers stream to it most days of the year in order to pray over the graves of holy men and supplicate for relief from their suffering. Aside from ultra-Orthodox Bnei Barak, no other city in Israel has such a concentration of believers.

In recent days Netivot has fallen into turmoil following the arrest of one of its most prominent rabbis. Residents watched in disbelief as policemen took Rabbi Yoram Abergel from his home and put him into a police cruiser. The astonishment only grew when it became known that one of the heads of organized crime in Israel, Shalom Domrani, was arrested with him. The joint arrest of the criminal and the rabbi shocked the ultra-Orthodox street and turned a spotlight on a world that is usually hidden from the eyes of most Israelis.

The two were accused of threatening Rabbi Yaakov Ifergan, called “the X-ray,” so that he would pull his support from one of the candidates for mayor of the city. They supported the reelection of the incumbent mayor, Yehiel Zohar, while Rabbi Ifergan supported his rival, Eyal Mesika. Zohar got elected to a fifth term, and Mesika turned to the police to complain of an extortion attempt and threats from the rabbi and the criminal.

Three rabbis have a grasp on Netivot as if it’s their private property: Baruch Abuhateizra, Yaakov Ifergan and Yoram Abergel. The three were secular in their twenties, until one day their world changed, and they became religious and cloaked themselves in holiness.

Rabbi Baruch Abuhatzeira is the son of Rabbi Israel Abuhatzeira, who was called “Baba Sali” by his tens of thousands of followers. Baba Sali was known to be able to perform miracles and change fates with a single touch and a blessing. Many thousands streamed to Netivot to benefit from these two supernatural healing abilities. After his death on Jan. 8, 1984, dozens of new "holy men," alive and dead, glowed in the skies of Netivot, and have given the city a unique spiritual status in the Israeli landscape. Festive memorial days have been instituted in honor of the “holy men,” which have turned into public religious-traditional celebrations, and throngs of pious admirers have flocked to the city to visit the graves of the righteous and holy men.

Sometime after his father’s death, Baruch Abuhatzeira took off his European suit and covered himself in a long robe. He wrapped his head in a cloth and grew a long beard. To surprised neighbors, he related that his father appeared to him at night and instructed him to inherit his position. Overnight, he turned from someone known as a hedonist and an avowed epicure, to a holy man.

Rabbi Ifergan had a similar experience. One night his father appeared to him and told him that he, his son, will from now on be considered a holy man in Israel. Ifergan, who was an aimless secular man at the time, grew a beard and donned a black suit and hat. These gave him a totally different appearance. Thousands started coming to the new holy man in order to receive wisdom and healing for their suffering. They said of him that he sees under the skin of the body like an x-ray machine, and is even able to heal cancer patients with a single blessing. The rumors of his supernatural abilities took flight in the Jewish world, and thousands flocked to his home. The donations they left behind made the rabbi one of the richest men in the country.

Like the other two, Rabbi Abergel claims he has a continuous connection with God. Before he was arrested, he sent a letter to his followers in town: “I hereby inform you that I received a clear message from heaven, that whoever votes for Yehiel Zohar for mayor will gain recognition in one second and that God will forgive him for transgression and sin, and he will see satisfaction in his sons and daughters and will be saved from all sorts of troubles and will merit all the joys and happiness and riches and honor.”

The rabbi was brought to court accompanied by a large procession of pious admirers. Many of them sobbed bitterly and waved banners saying, “Rabbi Abergel we love you!” or “Rabbi Abergel, we owe you our lives!” They surrounded the police station from which the rabbi was taken to the courthouse.

Police investigators told the judge that Rabbi Abergel is suspected of collaborating with the criminal Shalom Domrani, and that both of them threatened “the X-ray” not to support the opposing candidate. The rabbi was arrested and sent to jail, and in response, thousands blocked the entrance to Netivot. Since then, the rabbis’ courts have been silent, and an oppressive silence hangs over the city.

After the arrest of the rabbi and the criminal, Mesika announced that he is retiring from political life. “In the periphery, politics is an enterprise for all sorts of criminals and scoundrels,” he told the newspaper Maariv. Zohar himself announced that he has no connection to the rabbi and that his hand is not stirring the Hasidic courts in his city. Furthermore, he attacked the rabbis in the harshest language, and criticized their involvement in municipal politics.

“Here, the rabbis are crime families,” he told Maariv the day after Rabbi Abergel’s arrest. “I call on the police to investigate how rabbinic courts accumulate hundreds of millions of shekels. Take “the X-ray,” for example. People go into his place. There’s a large bowl, and they put money there, shekels, dollars, euros, and the money comes from poor people. There are also some who sign to make direct deposits. I myself am a graduate of a rabbinical college, and I say the 'X-ray' is not a rabbi. Only if I see a dead man resurrected with my own eyes will I say otherwise.”

On Nov. 17 Rabbi Abergel was released from jail and sentenced to house arrest. The police are determined to unravel the dangerous link that has formed between rabbis and criminals in an attempt to take over local politics. In the meantime, in Netivot they are preparing for the annual public celebration of “the X-ray,” which is to take place in a few weeks. Tens of thousands are expected to come, among them leaders of industry, politics and society. They will kiss the rabbi’s hand, will be photographed with him as he sits at the head table.