As long as the US is not playing a forceful role, there will be numerous difficulties that could prevent the Palestinian-Israeli negotiation process from successfully moving forward. 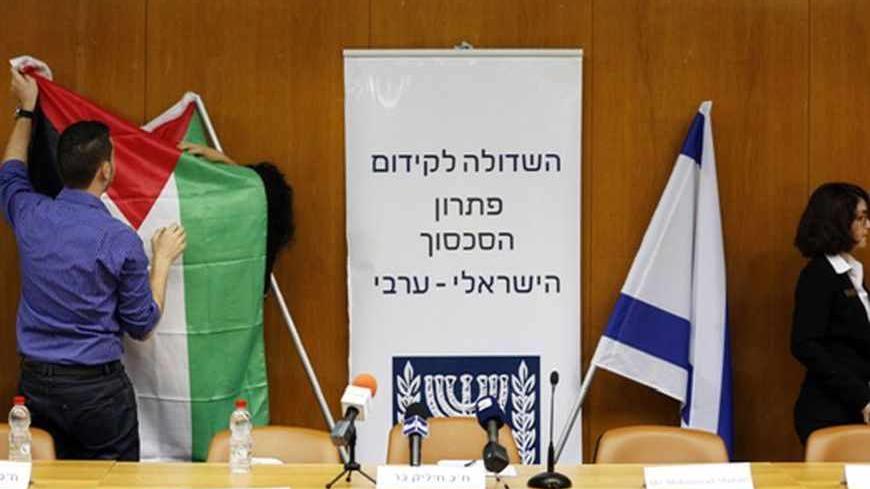 The little optimism that surrounded the takeoff round of the Palestinian-Israeli negotiations in Washington at the end of July is fading on the eve of the second round to be held in Jerusalem on Aug. 14. The optimism was initially due to the efforts of US Secretary of State John Kerry, as well as his personal style and direct involvement.

Two factors allowed for the relaunching of the peace process, with the hope of reaching a negotiated settlement within nine months. From the Palestinian National Authority perspective, negotiations in a US-sponsored process are a one-way ticket. What was needed for such a process to succeed was to create — as much as possible — better conditions for the takeoff, despite skepticism surrounding the end results.

Thus, the issue is to engage the United States. For the Israelis, as long as their hands were not tied behind their backs — by imposed terms of reference and conditions — then there is no need to resist the US-initiated process, since they will be able to dictate, later on, the direction and speed of the negotiations.

This has become a general understatement for Israel, as it realizes that forcing its hand is never on the agenda of the peace process under US management, even if the Israelis show intransigence or threaten the process itself.

Starting the negotiations by addressing two key issues — borders and security — aimed, from a US standpoint, to facilitate the takeoff. The agreement to address the border issue, for instance, would lead to addressing other issues such as settlements and Jerusalem. From the Palestinian and Arab standpoint, addressing first the application of UN Security Council Resolution 242 is the best and most efficient way to move on the track to peace and the two-state solution.

Yet, from day one, confidence-building measures were not only brushed aside, they were replaced by confidence-destruction measures by Israel. The best example of such destructive measures is the continuation of the settlement policy. A policy that consists of building new settlement units and changing the legal status of some established settlements. The aim is to render them part of the future territories to be annexed by Israel under the land swapping agreement, to be completed later as part of reaching the two-state solution.

The Israeli government is also insisting on introducing new conditions to the table, which hinder the serious progress of the negotiations. The conditions include the Palestinian recognition of Israel as a Jewish state.

The aim is to settle the refugee problem according to the Israeli agenda. The Palestinian position has been clear on the issue: It suffices to recognize the State of Israel, according to international law, with no obligation to recognize the nature of the state. Another condition, which will erode the possibility of reaching peace, lies in Israel’s insistence on maintaining a military presence in the Jordan Valley for an undetermined number of years.

Such a condition — regardless of the pretext — will constitute a grave violation of the sovereignty of the to-be established Palestinian state. It is definitely rejected and will never be accepted by the Palestinians. There are many ways to address the security concerns of both parties simultaneously without impinging on the sovereignty of either of the two states.

How much Washington will be involved as a facilitator — a role that needs to be clearly defined — remains to be seen in the coming negotiations. Creating dynamics for negotiations is not enough to achieve genuine progress or have much-needed economic catalysts for progress realized. The parameters and foundations for a comprehensive peace are already known. The road to peace goes through a package deal based on trade-offs within and between the key issues of contention in the conflict. Yet, we are still very far from that road.

The Palestinian issue lags far behind more important and pressing issues on the regional agenda, which have greater repercussions for security and stability in the Middle East — in countries such as Iran, Syria and Egypt. Leaving the two parties to make peace alone, with only good intentions on the part of Washington, is not the right recipe to reach a successfully negotiated settlement. The examples of the failed attempts along this approach in the last two decades are numerous to support this conclusion.