Hamas has been clamping down on young men wearing waist-down jeans and hair gel, the latest move in the ruling organization’s insidious campaign to “Islamize” Palestinian society in Gaza, writes Hazem Balousha. 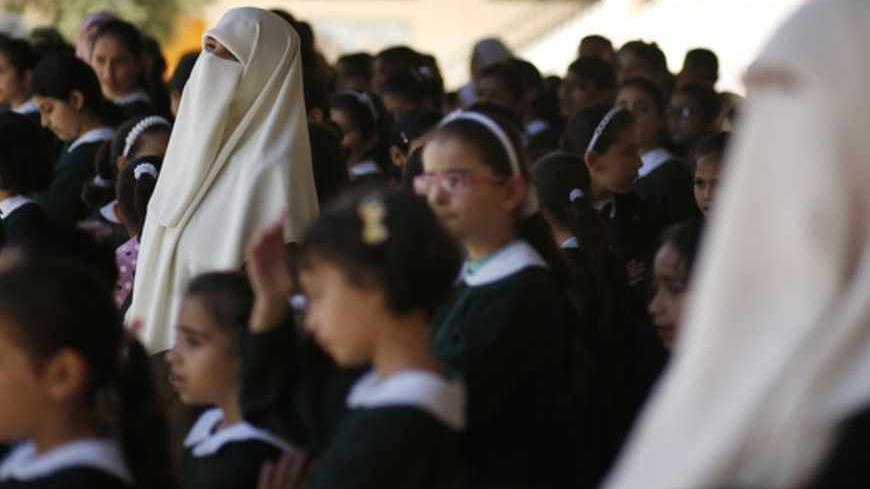 Hamas has recently started an undeclared campaign to combat Western clothing and hairstyles in the Gaza Strip, alongside other campaigns launched by the Ministry of Culture and the Hamas-affiliated student body to raise awareness and combat Western culture and behavior within the Palestinian community in Gaza.

The Palestinian police have detained dozens of young men for wearing “waist-down jeans” and hair gel, and having “Western” haircuts. This has sparked a wave of protests and public criticism on the part of human rights organizations, as they consider these measures to be an encroachment on personal freedoms without any legal basis.

According to a number of young men, some interviewed by Al-Monitor and some that have uploaded videos on YouTube, they have been arrested by the police while walking in the street. Some of them have been forced to have their hair cut, while others have been beaten and humiliated for wearing waist-down jeans or hair gel.

Mohammed, 32, who refused to mention his family name for fear of reprisal, said to Al-Monitor, “I was at work when I received a surprising phone call from my younger brother telling me that he had been arrested [and was being held] at the police station in the east of Gaza City. He wanted me to go to the station and bail him out. When I went there I was surprised to see that his head had been shaved in the shape of a cross and he was forced to sign a pledge not to grow his hair in this way again.”

He added, “When I returned home, I was also surprised to learn that my wife, who works as a pharmacist, had been sprayed with chlorine while walking in the street near al-Azhar University in Gaza by bearded men who are likely affiliated with the Islamic bloc in Hamas.”

In this context, Ihab al-Ghussein, head of Hamas' media office in Gaza, made contradictory statements about the police campaign against young men. While on his Facebook page he denied the existence of such a campaign, he confirmed on his twitter account in response to a question that “the police acts have been totally stopped.”

On his Facebook page, Ghussein said “I would like to stress that these phenomena are very bad and unacceptable within our conservative, resistant Palestinian society. These phenomena cannot be part of our young people, who are struggling for liberation and are resisting occupation.”

The Islamic bloc launched a campaign titled “My morals, the secret of my life” in the universities of the Gaza Strip early last month “in order to promote sound behaviors and deal with bad conduct among young people.”

In a press statement, the campaign's sponspor Muhannad Hadda said that “this campaign seeks to counter the intellectual invasion among young people and raise cultural and religious awareness, as the Islamic nation is in need of an Islamic generation that is committed to the true teachings of Islam.”

Social-networking sites and online forums have been rife with heated debates and scathing criticism by secular activists of these campaigns.

In the same vein, Mohammed al-Madhoun, the Minister of Youth and Culture in Gaza, has announced the launch of the “good conduct” project in early April in order to “promote social values and good behavior in Palestinian society.”

In a press conference, Madhoun said that “young Palestinian people are influenced by the inadequate foreign cultures that are not commensurate with the nature of our society and its customs and traditions.”

“Therefore, we have to do a self-review and discuss appropriate solutions to preserve our society and meet the challenges and risks that surround it from all sides. Thus, we launched the campaign titled 'My values, my life,' which is designed to build a balanced and integrated character,” he added.

For his part, Sami Abu Eita, the official in the Ministry of Culture responsible for the campaign, said in an interview with Al-Monitor that the campaign “is aimed at promoting good conduct and national values and concepts through cultural means.”

Khalil Abu Shamala, director of the al-Damir human rights organization in Gaza, demanded that the police stop abusing young people by prosecuting and humiliating them based on having certain hairstyles or wearing certain kinds of pants. He said, “This is a violation of personal rights that are stipulated in the Palestinian basic law. These violations are carried out by the authorities that are supposed to be keen to implement the law in form and substance.”

Abu Shamala also accused the government in Gaza of seeking to impose its vision on Palestinian society “without any regard to the articles of the basic law, which regulate the relations between the authority and citizens."

It should be noted that the Hamas government has banned women from smoking shisha in public cafes and imposed “Islamic dress” for female lawyers in Sharia courts. The government has also passed a new education law that prohibits mixing between the sexes in schools and has banned UNRWA from organizing a marathon in which women can participate.

Fatima Ashour, a lawyer in Gaza, told Al-Monitor that she was “banned from entering courtrooms and police stations for wearing pants and for not adhering to Islamic dress.”

“The Sharia Court in Gaza bans all non-veiled women from entering its premises. Women who wish to enter the court must wear the hijab, according to an announcement placed on the court's entrance,” she said.

Hazem Balousha is a Palestinian journalist based in Gaza City. He has worked as a news producer for BBC World Service, as well as contributed to Deutsche Welle, The Guardian, Al-Raya (Qatar) and other publications. Balousha covered Israel's Operation Cast Lead in Gaza in 2008 and the conflict between Fatah and Hamas in 2007. He is also the founder of the Palestinian Institute for Communication and Development (PICD), and has a masters degree in international relations as well as a BA in journalism. Twitter:@iHaZeMi