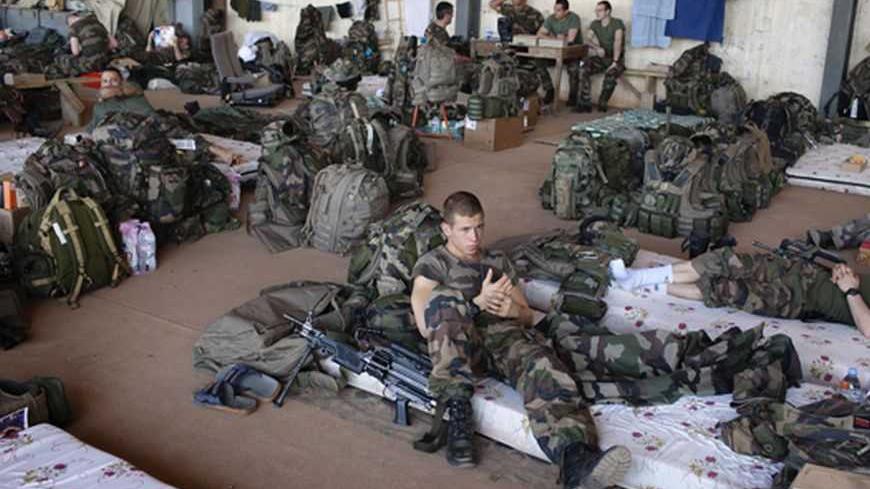 A French soldiers lies on his mattress in a hangar at the Malian army air base in Bamako, Mali, Jan. 14, 2013. - REUTERS/Joe Penney

The French attack on Mali came as a surprise for many, at least in terms of its timing. According to UN Security Council resolution 2085 of December 2012, it was expected to come as part of a process of backing up African forces deployed by the Economic Community of Western African Countries (ECOWAS) to assist the Malian forces.

The radical Islamists' successful offensive into the south of the country and the danger that these elements will gain control of most of Mali — since they face a demoralized and ill-equipped army — has led to an immediate French reaction to the preemptive attack.

The Algerians, who share a 1200-mile border with Mali, had engaged in intensive diplomatic activities to dissociate the rebel factions, who have a national political or ethnic agenda, from the jihadist forces of Al Qaeda in the Islamic Maghreb (AQIM). Algeria always took a more nuanced, comprehensive and political approach to the crisis. But events changed their agenda and timing.

The increasing power of the AQIM jihadists, the continued deterioration of the socioeconomic conditions of the country, the ongoing political crisis and the rise of Islamism all make Mali — a failed state torn by ethnic and tribal wars — ripe for Afghanization.

The prime ministers of Tunisia, Algeria and Libya met on Saturday to discuss the deteriorating security situation on their common borders, the triangle border, which has become a growing source of concern for the three countries.

Fighters and arms are flowing into and out of Mali into the Maghreb region. The region is undergoing a fragile transition, especially in Libya and in Tunisia. These new fighters have added to the ever-present fear that jihadist movements will return to action in Algeria. Mali has become an increasingly dangerous ticking time bomb.

Many observers worry that France is entering a quagmire in Mali, and that it will be drawn into a long war of attrition in trying to fight radical jihadist movements, as well as a never-ending domestic conflict. But what we are witnessing today is the beginning of a war in Mali that will drag in many external regional and non-regional actors.

When dealing with the Mali conflict — which has many related dimensions — and trying to learn from experiences in Afghanistan, the basic challenge is to adopt a two-track, comprehensive approach to the conflict. This conflict will have effects beyond the country’s immediate neighbors. The first part of this approach involves a joint African-UN military effort to pacify the country. This is a necessary but insufficient approach, unless it is joined in simultaneous tandum with a comprehensive strategy for national reconstruction. This strategy should focus on political reconciliation and be based on inclusiveness and socio-economic aid for development.

Poverty, exclusion, absence of political participation across the population and a lack of education provide the deep roots of Mali's domestic conflicts. It is a tall order, but the dangers of failure are much bigger for the Maghreb region, for Africa and also for Europe, if we allow an African Afghanistan to emerge.

Ambassador Nassif Hitti is head of the Arab League Mission in Paris, a permanent observer at UNESCO and a member of the Al-Monitor board of directors. The views he presents here are his alone and do not necessarily reflect the views of these organizations.