According to a new book by veteran US and Israeli journalists, Israelis were behind the killing of five Iranian scientists connected to Iran’s nuclear program. Barbara Slavin writes that Spies Against Armageddon is an account of Israeli intelligence triumphs and fiascoes, covering both notorious and less-known operations. 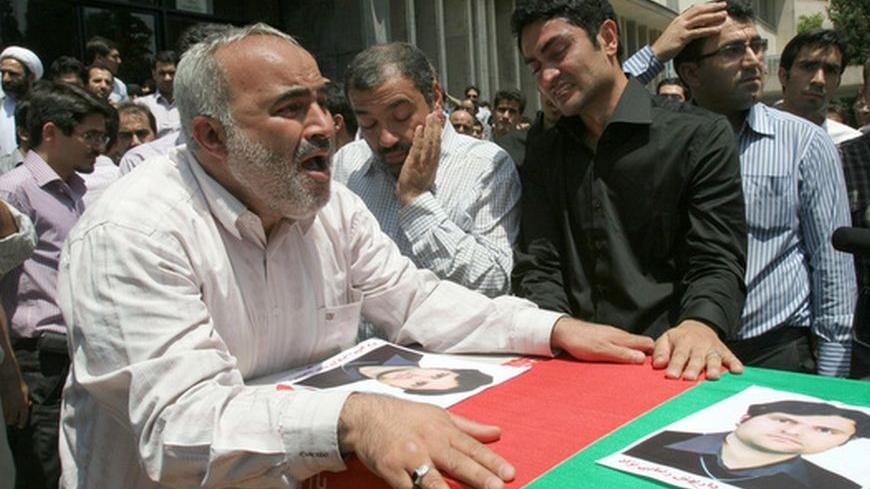 Relatives of Iranian scientist Darioush Rezaie, who was shot dead by a motorcyclist, mourn at his coffin in Tehran July 24, 2011 - REUTERS/Stringer

Israelis, not Iranians working for Israel, killed five Iranian scientists connected to Iran’s nuclear program between 2007 and 2011 according to a new book by veteran US and Israeli journalists.

Dan Raviv, a well-known reporter for CBS, and Yossi Melman, a former intelligence correspondent for Ha’aretz, write in “Spies Against Armageddon” that contrary to published reports — which link the killings to members of the Mujaheddin-e Khalq, an Iranian opposition group — Israel would not have contracted out such controversial and difficult work.

Instead, the authors say, the killings by motorcycle riders who affixed sticky bombs to their victims’ cars in Tehran traffic were “blue and white operations” — a reference to the colors of Israel’s flag.

“For such a sensitive dangerous and daring mission as a series of assassinations in Iran’s capital, the Mossad would not depend on hired-gun mercenaries,” Raviv and Melman assert. “They would be considered far less trustworthy and there was hardly any chance that the Mossad would reveal to non-Israelis some of its assassination unit’s best methods.”

An update of previous works by the authors, this very readable account depicts Israeli intelligence triumphs and fiascoes.

Many of the successes are well known: obtaining a copy of Nikita Khrushchev’s secret speech denouncing Stalin in 1956, kidnapping the Nazi war criminal Adolf Eichmann in Argentina in 1960 and destroying a Syrian nuclear reactor under construction in 2007. Among the fiascoes that readers may not be familiar with: killing a Moroccan waiter in Norway in 1973 after mistaking him for a Palestinian terrorist and failing to heed the warnings of a top Egyptian spy — who happened to be Gamel Abdel Nasser’s son-in-law — that Arab armies were about to launch the 1973 Yom Kippur war.

One strength of the book is that the authors do not use euphemisms. The Mossad had a “kill list” long before US President Barack Obama and has stolen military technology from the United States that Israel could not obtain by other means, they say.

While Israeli operatives have been responsible for acts of incredible bravery, Raviv and Melman fault Israeli leaders for sometimes focusing on the wrong targets and ordering actions that created bigger threats. Thus the 1982 invasion of Lebanon forced the PLO into exile but led to the formation of Hezbollah, a far more dangerous foe. Israel’s assassination of the leader of Hezbollah in 1992 led to revenge bombings in Argentina that killed hundreds of Jews and other innocent civilians.

A botched attempt in 1997 to take out Hamas leader Khaled Meshal in Jordan elevated his importance and wrecked an early chance for Israel to sign a 30-year truce with the fundamentalist group, the authors say. Murdering Yasir Arafat’s number two, Abu Jihad, in Tunis in 1988 deprived the PLO of a charismatic figure who might have succeeded Arafat and been a more effective interlocutor with Israel than the current Palestinian leader, Mahmoud Abbas.

On the other hand, the authors praise the 2008 assassination of Hezbollah intelligence chief Imad Mughniyeh in Damascus as crippling to that organization. They say that killing a Palestinian official in a Dubai hotel in 2010 — a public-relations nightmare after the Mossad killers’ counterfeit passports were discovered — accomplished the goal of eliminating Hamas’s chief of logistics and supply of weapons to Gaza.

On the issue of Iran’s nuclear program — currently Israel’s biggest intelligence target — Raviv and Melman note the skepticism expressed by former and current intelligence chiefs about the value of a frontal military attack. The authors assert that Israeli intelligence about Iran is so good that Israel will likely know if and when Supreme Leader Ayatollah Ali Khamenei makes a decision to go for a bomb. Israeli successes in slowing the Iranian nuclear program through means short of military strikes keeps postponing that day of reckoning, they say.