US releases some military aid to Egypt amid human rights concerns

The administration is providing Egypt with $170 million in military assistance that Congress had made contingent on the country improving its rights record. 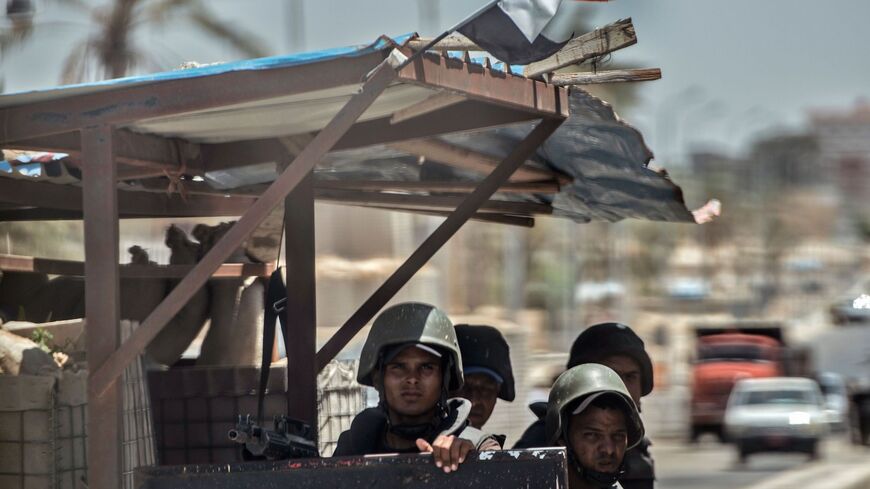 A picture taken on July 26, 2018, shows Egyptian police guarding a checkpoint on a road leading to the North Sinai provincial capital of El-Arish. - KHALED DESOUKI/AFP via Getty Images

The Biden administration will withhold some but not all of Egypt’s annual military aid that Congress had conditioned on the country making human rights improvements, disappointing many Democratic lawmakers and rights groups who said the decision undermines President Joe Biden’s past promises on holding the partner to account.

At $1.3 billion, Egypt trails Israel as the second-largest recipient of US military assistance each year. In its annual appropriations legislation, Congress made the release of $300 million for the coming year contingent on Egypt meeting certain human rights benchmarks.

For the second year in a row, the Biden administration decided to withhold $130 million of the conditioned $300 million. The withheld aid — which represents 10% of Egypt’s total assistance package — will be immediately reprogrammed, unlike last year when Washington gave Cairo several months to comply with a set of rights conditions and then cut the aid when it failed to do so.

A separate tranche of $95 million in conditioned military assistance will be released to Egypt for use in counterterrorism, border security and nonproliferation programs.

Of the $300 million with strings attached by Congress, the release of $75 million this year required that Secretary of State Antony Blinken certify Egypt is “making clear and consistent progress” in the release of political prisoners and providing detainees with due process. The State Department chose to release the $75 million to Egypt, citing its release of some 500 political prisoners this year and President Abdel Fattah al-Sisi’s launch of a national dialogue with opposition groups.

Seth Binder, director of advocacy at the Project on Middle East Democracy, called the administration's legal determination “hard to fathom.”

“More political prisoners have been arrested than released, thousands more have had detentions renewed and not one step has been taken to improve due process rights during this span,” Binder said. “This rewards al-Sisi’s regime for something they clearly didn’t do.”

Human rights in Egypt have sharply deteriorated under Sisi. The State Department’s annual human rights report details a litany of violations, including extrajudicial killings by the government or its agents, forced disappearances by state security forces, life-threatening prison conditions and the arbitrary detention of political prisoners.

Biden officials say they’ve repeatedly raised human rights concerns with Egyptian officials both publicly and privately. They describe Egypt as an important strategic partner in the Middle East and point to its role in mediating conflicts between Israel and Palestinian militants.

A State Department official briefing reporters described the administration’s approach to Egypt’s military aid this year as one that seeks “to preserve the engagement and dialogue we have had over the last 20 months.”

The release of some conditioned aid to Cairo comes despite pressure from Congressional Democrats who argued that withholding assistance could incentivize Sisi to change course.

Senator Chris Murphy (D-Conn.), a vocal critic of the Sisi government, called the administration’s decision “a missed opportunity to stand up for human rights.”

“Out of some 60,000 political prisoners, less than 1 percent have been released over the last year,” he noted in a statement. “During that same time period, 10 times as many prisoners had their detentions renewed.”

The Egyptian government denies there are political prisoners and says many of the protesters, journalists and supporters of the Muslim Brotherhood languishing in Egypt’s jails constitute a national security threat.