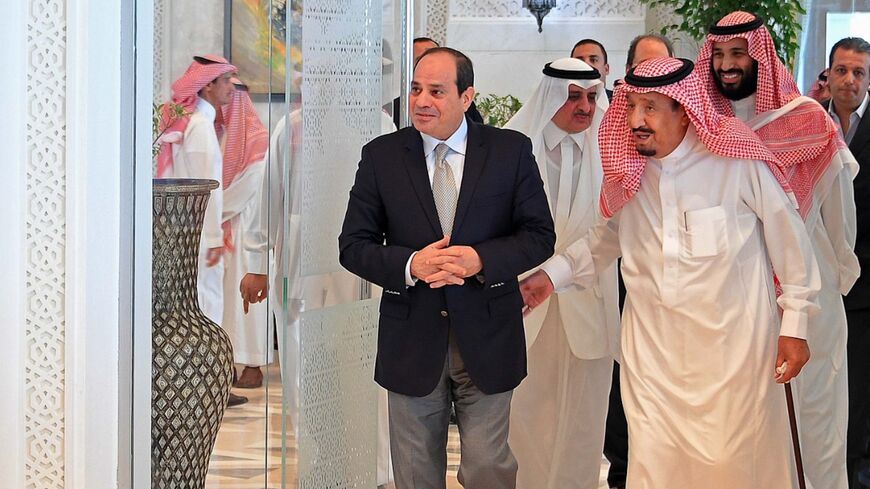 NEOM is a new Saudi city currently being built in the Tabuk province in northwestern Saudi Arabia, east of Egypt. The city, which will extend along the Red Sea coast, is set to become a hub for smart city technologies and serve as a tourist destination.

At a conference announcing his flagship megaproject on July 26, Mohammed said, “We’re going to create huge investments in Egypt,” without giving further details about those investments.

In October 2017, the powerful crown prince launched the NEOM project, located in the far northwest of Saudi Arabia, as part of his country's plan to end its dependence on oil revenues and diversify its sources of income.

The project will turn 50 Red Sea islands into luxury resorts. It will also include seven cities and tourism projects, while Egypt will focus on developing the existing resort cities of Sharm el-Sheikh and Hurghada, a Saudi official told Reuters back in 2018.

Analysts and political and economic experts who spoke to Al-Monitor believe Mohammed's announcement of Saudi investments in Egypt within the framework of the NEOM project consecrated the political and strategic rapprochement between Cairo and Riyadh. The two countries have been preparing for this project for a few years, and bilateral agreements in this respect have already been signed, with high hopes that revived tourism in Saudi Arabia would boost tourism in Egypt’s Sharm el-Sheikh and Hurghada.

Saudi Arabia and Egypt signed a series of investment agreements in March 2018 and set up a $10 billion joint fund to develop ​​about 1,000 square kilometers of Egyptian lands in southern Sinai, to be part of the NEOM project.

The two countries also signed an environmental agreement to protect the marine environment and reduce pollution to preserve coral reefs and beaches, and agreed on binding controls to prevent visual pollution.

Tarek Fahmy, a professor of political science at Cairo University, told Al-Monitor, “The NEOM project and the announcement of Saudi investments are a promising investment opportunity for Egypt.”

He added, “The announcement of the Saudi crown prince at this time reflects the great strides made by the kingdom of Saudi Arabia in achieving its Vision 2030. Bin Salman had rolled out this vision in 2016 with the aim of bringing his country into a post-oil stage by diversifying sources of national income through projects including in the tourism and infrastructure fields.”

“Large investments are expected in Egypt with the support of the Saudi Public Investment Fund. The NEOM megaproject will be a golden investment opportunity not only for Saudi investors but also for Egyptian and international investors,” Fahmy said.

The Public Investment Fund is the main investor in NEOM. The project's first phase is scheduled to be completed in 2025.

Fahmy added, “There is Egyptian-Saudi coordination at the highest level regarding the execution of the NEOM project, especially after that the two countries established a joint fund of $10 billion to develop lands on an area of ​​1,000 square kilometers in the south Sinai region. This confirms the convergence of visions and views between the two countries and strengthens their strategic and national rapprochement.”

At a meeting with representatives of the media in Sharm el-Sheikh on the sidelines of the World Youth Forum in late 2017, Egyptian President Abdel Fattah al-Sisi praised the NEOM project, saying that infrastructure in Sinai is being developed in support of tourist projects. Sisi asserted that Sinai’s infrastructure would be ready for future projects.

In August 2018, Sisi made a first-of-its-kind visit by a head of state to the city of NEOM and met Saudi King Salman Bin Abdul-Aziz Al Saud there.

Ali al-Idrissi, a professor of economics at the Culture and Science City in Cairo and member of the Egyptian Society for Political Economy Statistics and Legislation, told Al-Monitor, “The NEOM project was announced in 2017 but faced many challenges including the coronavirus pandemic and most recently the war on Ukraine and its impact on global markets.”

He explained that “the announcement of new milestones in the project and investments into Egypt reflects a great confidence in the Egyptian economy despite the state of uncertainty for the global economy. These investments are in the interest of both Egypt and Saudi Arabia. The Red Sea region, whether from the Saudi or Egyptian side, will attract a lot of investments when the initial public offering of NEOM is launched in 2024.”

In his recent conference, Mohammed said his country is planning an initial public offering of the kingdom’s $500 billion megaproject NEOM as soon as 2024.

Ahmed al-Khadem, a tourism expert and former head of the Egyptian Tourism Authority, told Al-Monitor, “Numerous tourism development projects have been developed in the Sharm el-Sheikh tourist area in the last period, but many more new tourist attractions can be established to offer more distinguished tourism services."

In a statement in August 2021, Egyptian Prime Minister Mustafa Madbouly said, “The comprehensive developmental vision for Sharm el-Sheikh is based on diversifying the activities of the city offered to its visitors from inside or outside Egypt. Thus, the highest revenue from tourism will be achieved, and a unique experience will be provided to enjoy the enchanting nature of the sparkling city.”

Khadem pointed out that “the tourism development plan in Egypt is mainly based on establishing integrated tourist centers. The next stage will consist of leveraging Saudi investments in making Sharm el-Sheikh more attractive to tourists, which will reflect positively on the country’s national income, given that tourism is the main source of national income for Egypt.”

Khadem indicated that Saudi Arabia wants to diversify its investments and is not satisfied with oil revenues only, and Egypt offers a safe investment environment. “The NEOM project confirms the economic and strategic cooperation between the two countries,” he said.

Idrissi concurred, saying, “Saudi Arabia is looking to diversify its sources of income and to break its economic dependence on oil, thus its focus on the tourism and investment sector. The UAE has been the first Gulf country to follow this approach. Meanwhile, any huge development project in the Red Sea area will be beneficial for Egypt and its Red Sea cities, especially Sharm el-Sheikh.”