Palestinians call out PayPal for discrimination

PayPal's refusal to offer services in Palestine is impeding the region's economic growth and preventing many freelance knowledge workers from receiving digital payments. 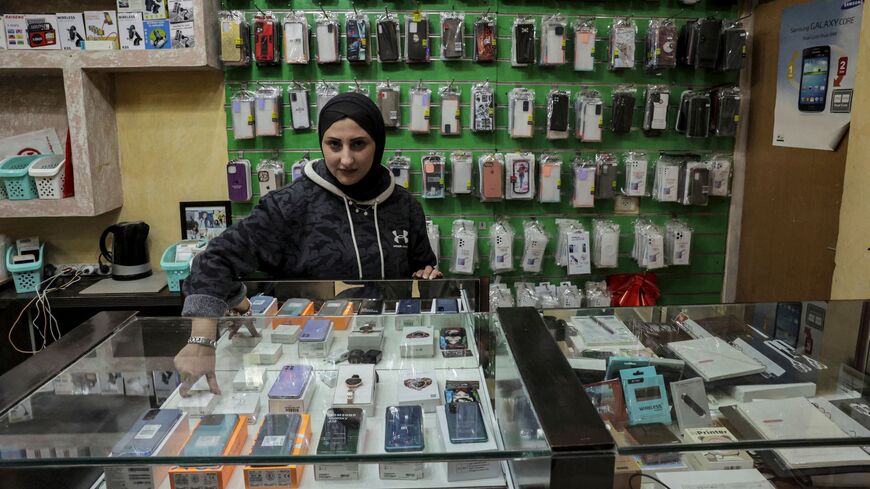 Wafaa al-Suss, a Palestinian electronics technician and the only woman practicing the profession in her area, picks up a new unopened cell phone at her retail and repair shop in the village of Dura, west of the city of Hebron in the occupied West Bank on May 10, 2022. - HAZEM BADER/AFP via Getty Images

Muhammad Hassanein, a Palestinian in his 30s from Gaza, has nine year of experience as an online freelancer in content writing, website management and programming.

“Freelance platforms mostly deal with PayPal, which does not provide services for Palestinians. I received a payment once and then my account was suspended,” he told Al-Monitor.

“I tried to resort to Western Union, but I could not receive my money from several platforms that said they only dealt with PayPal, which prompted me to circumvent [the system] to get my money, and as a result all my accounts on freelance platforms and websites were closed,” he said.

PayPal, the most-used company for online payments, does not serve Palestinians, which negatively affects their work, especially in the the Gaza Strip, where online and remote jobs are often the only available work.

Although it operates in Israeli settlements, PayPal justified its refusal to provide services in the occupied Palestinian territories on the basis of its “no-go” policy, which classifies Palestine, along with several other countries, as “high-risk” areas.

Several Palestinian institutions have been trying to draw the world’s attention to the policy, and international activists are also involved. American actor Mark Ruffalo denounced ​​​​​​ the company’s policy on Twitter June 6 and called on it to end its discrimination by leading a campaign to gather 250,000 signatures to reverse its decision.

Tamer, a pseudonym for a 27-year-old graphic designer from Gaza, opened an account on PayPal and chose Israel as the country of location because Palestine was not an option. The company "asked me to prove that I was Israeli and that I need to send an Israeli ID or passport. Of course, I did not have these, so they closed my account,” he told Al-Monitor.

Dalia Sharab, a social media trainer who previously worked as marketing officer at the Gaza Sky Geeks startup, regrets that many Palestinians are subjected to fraud and neglect, with many unable to collect their own money for which they provided services online.

Policies like PayPal’s "take a huge toll" on freelancers' mental health,” Sharab told Al-Monitor. “These practices prompted several online freelancers to quit their online jobs because they could not get paid by customers abroad.”

But Sharab does not believe that PayPal would change its policy toward Palestinians. “They support the Israeli occupation, and I don’t think they would cave in no matter the pressure they are facing,” she said.

Meanwhile, 7amleh - The Arab Center for Social Media Advancement, an independent center based in Haifa, has been working for years with several partner organizations to counter PayPal’s policy. They launched a microsite of the company and an email invitation to receive complaints from those affected by the company’s policies.

PayPal operates in Israeli settlements, which “are considered illegal under international law, which means that this policy of exclusion has to do with the Palestinian identity and not the geographical location,” Munia Zaher, the media coordinator at the 7amleh center, told Al-Monitor.

But, she said, Palestine and its people are ready for online payments. “Palestinian banks follow international standards, and the government has enacted laws regulating digital transactions. Palestine has already managed to pass several necessary stages on its way to obtaining access to global electronic payment systems, including approving the Electronic Transactions Law,” she explained.

She also indicated that the availability of PayPal would improve the lives and careers of 42,000 Palestinian university graduates annually by providing them with access to more than 120 online job sites.

“Our [2020] research dubbed ‘Access Denied’ found that more than 80% of Palestinian families would use the service if it was offered to them,” Zaher said.