Four Egyptian students created an innovative glow-in-the-dark concrete that can be used to light up highways and roads, as the world faces a growing energy crisis. 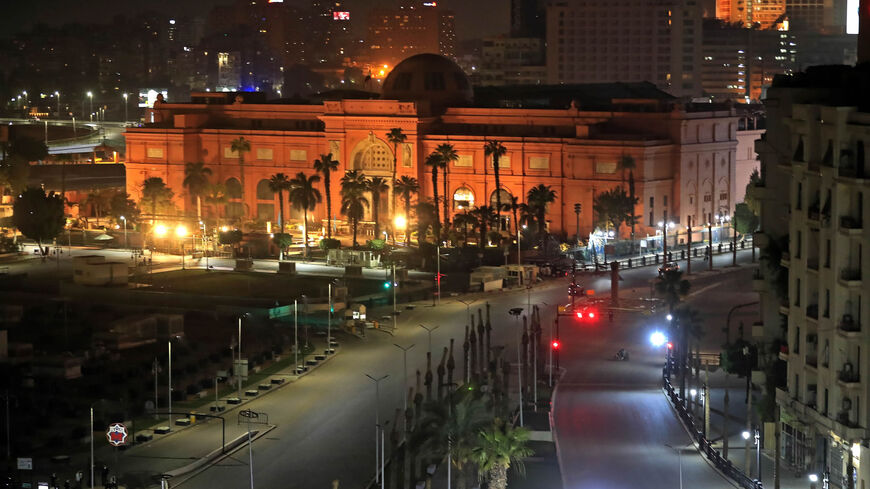 The street in Tahrir Square leading to the Museum of Egyptian Antiquities (in background) is deserted on the first day of a two-week night-time curfew imposed by the authorities to contain the spread of the novel coronavirus, Cairo, Egypt, March 25, 2020. - Khaled Desouki/AFP via Getty Images

Four students at the American University in Cairo came up with a unique idea to create a glow-in-the-dark concrete that could be a solution to save energy.

“The idea of our research came from wanting to make an integral construction material, just like concrete, but more sustainable and environmentally friendly in both its creation and function, especially in light of what the world has come to with energy shortages and draining of resources,” said Menna Soliman, one of the undergraduate students at the Department of Construction Engineering at the American University in Cairo, who helped develop the new self-luminous concrete material.

Zainab Mahmoud, another member of the team, told Al-Monitor, “We based our ideas on previous research in this field. We were able to develop self-luminous concrete that absorbs sunlight and emits light in the dark, which was part of our graduation project. This material would help reduce heavy reliance on energy used in lighting sidewalks and roads, without compromising the mechanical characteristic of the material.”

She said, “It took more than three months to reach the final product, which is part of the graduation project period. The work on the project was presented in January at the Transportation Research Board’s 101st annual meeting in Washington."

Mahmoud noted, “The idea was welcomed by the attendees, and we had the chance to meet with experts in the field who recommended that we convert the project into a product.”

Mayar Khairy, another student on the team, said that turning the project into a product on the market is feasible but needs further study.

She told Al-Monitor that she and her colleagues have already considered further research, noting that the product would be costly at the first stage, but producing larger quantities would eventually mean less costs.

Mahmoud revealed that some companies have already contacted them to inquire about the production and convert the project into a product to be sold on the market.

Nagib Abu Zeid, professor of construction engineering at the American University of Cairo and the project’s supervisor, stressed that sustainability and safety are two major themes of the project, as the concrete would help reduce the massive amount of energy used in lighting highways and street signage needed for safe rides, at a time when the world is facing a major energy crisis because of the Russian war on Ukraine, and amid threats of cutting off Russian gas to Europe.

Abu Zeid told Al-Monitor, “The students tried to access renewable energy sources and use it in an optimal manner, which was the main goal of their project.”

Commenting on whether the project would turn into a profitable one, he said, “Future steps might include producing larger quantities as pilot trials to be evaluated on actual field conditions, such as a small stretch of a highway or larger areas. I believe that the idea would be successful on the scientific level.”

He added, “The high material cost will not be the only challenge to the practical implementation of the project. There are also costs to study the product’s energy-saving, safety rate, traffic flow and environmental protection. Any economic feasibility study must take these matters into consideration.”

Abu Zeid explained that it is difficult to determine a specific time frame to turn a project into a product. “Usually studies continue for one or two years, during which the idea could be tested in safe areas, to check the concrete’s resilience to weather conditions and its endurance.”

“The self-luminous concrete contains materials that absorb light and then emit it. Several materials with these properties have been tested, and the ones with the strongest luminosity and durability were selected because we don’t want the glow-in-the-dark property to supersede the concrete durability and stability as a construction material,” he concluded.