Ankara's threats come amid a spat with NATO allies over Finland and Sweden’s request to join the Western alliance. 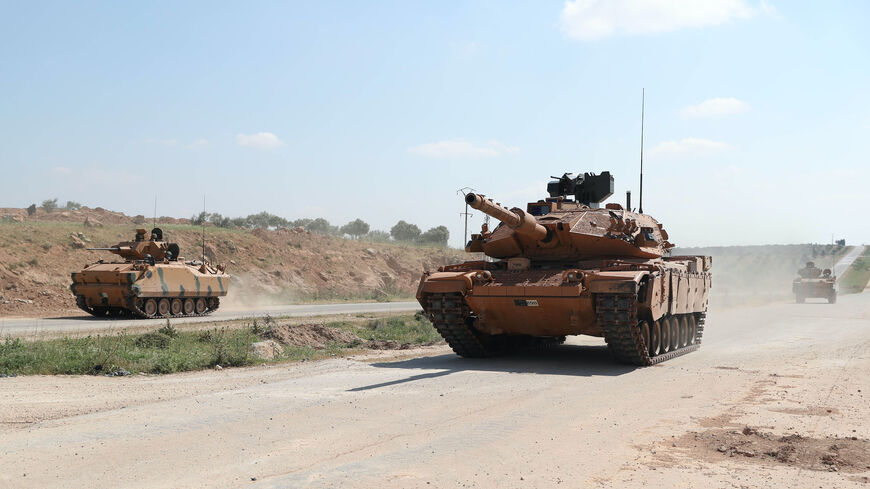 Turkish military tanks drive past the town of Ariha on the M4 highway in Syria's rebel-held northwestern Idlib province on May 7, 2020. - OMAR HAJ KADOUR/AFP via Getty Images

Turkey’s National Security Council said on Thursday that Turkey’s “existing and future military operations” along its southern borders were necessary for the country’s security but that they did not target the sovereignty of its neighbors. The ambiguously worded statement left open the possibility that Turkish President Recep Tayyip Erdogan will make good on threats he made Monday to launch a new offensive targeting US-backed Kurdish forces in northern Syria.

US and Syrian Kurdish officials told Al-Monitor that Turkish threats of intervention to establish a 30-kilometer deep safe zone were being treated as “serious."

“The main target of these operations will be areas which are centers of attacks to our country and safe zones,” Erdogan said earlier this week, without providing any details.

Turkey’s pro-government news channels are already beating the war drums. Ahaber showed footage today of Syrian National Army fighters armed and trained by the Turkish military carrying out what the broadcaster claimed were exercises in preparation for the new operation.

Turkey’s threats come amid a spat with its NATO allies over Finland and Sweden’s request to join the Western alliance in response to Russia’s invasion of Ukraine.

Erdogan says Turkey will block their membership until the Nordic states address Ankara’s “legitimate security concerns” over their support for Kurdish groups.

Swedish and Finish delegations earlier this week left Ankara empty-handed. The conventional wisdom is that the Ukraine conflict has created fresh space for Turkey to engage in bazaar tactics, bargaining with its Western partners for a laundry list of demands. These include easing US military sanctions over Turkey’s purchase of Russian S400s, and providing upgrades for its aging fleet of F-16 fighter jets. Ankara is demanding that Sweden ease its military sanctions over Turkey’s 2019 invasion of northeast Syria and end all dealings with the Syrian Kurds.

However, concessions from the West are but one element of Erdogan’s calculations which are mainly about his own political survival. The Turkish economy is in crisis. The lira is continuing its downward spiral, not least due to Erdogan’s stubborn refusal to raise interest rates. Prices are skyrocketing. Anti-immigrant hysteria is rising in parallel.

A steady trickle of Turkish soldiers coming back in coffins from Iraqi Kurdistan — where the Turkish military’s latest offensive against the Kurdistan Workers Party (PKK) is grinding on — is sharpening nationalist feelings.

Pro-government channels have been airing more tear-jerking footage of soldiers of late, along with jingoistic commentary predicting imminent victory. The battle against the PKK is in its 36th year.

Grabbing more Syrian territory from the Kurds to make room for the unwanted millions of Syrian refugees in Turkey, and pushing back “Kurdish terrorists” in the process, will likely play well across ideological lines. This may explain why the main opposition Republican People’s Party has said little of Erdogan’s plans, while the main nationalist opposition Iyi Party has even cheered him on.

A war against the Syrian Kurds will force the opposition to rally around the flag and into reverting to the sort of hawkish rhetoric that will likely alienate Kurdish voters, another win for Erdogan, amid mounting speculation of snap polls in November. The Kurds are an important swing vote bloc, as dramatically revealed by Istanbul’s redo elections in 2019. Should they spurn the ballot box in a collective fit of disgust, this would give Erdogan a big advantage.

Turkey has launched three major operations in northern Syria since 2016 to torpedo the Syrian Kurds’ efforts to build an autonomous administration uniting Arabs, Kurds and Christians.

Turkey justifies its attacks on the grounds that the administration and its armed wings are part of the PKK and therefore pose an existential threat to Turkey’s security. Mazlum Kobani, the commander in chief of the Syrian Democratic Forces, the US-led coalition’s top ally against IS, has repeatedly said he wants peace with Turkey. But his calls have cut no ice with Ankara. It keeps reminding Washington that Kobani and many of his colleagues rose through the ranks of the PKK.

Ilham Ahmed, the president of the executive committee of the Syrian Democratic Council, one of the main arms of the Kurdish administration in northeast Syria, summed up Turkey’s tactics in a WhatsApp interview with Al-Monitor. “Erdogan is trying to take advantage of the Ukrainian war by provoking all sides to get concessions from them. For example, Turkey seeks to please Russia by making the PKK issue an obstacle to Finland and Sweden's membership in NATO. It provokes the Europeans with the refugee issue to obtain approval for the security zone [in northeast Syria].”

Fawza al-Yusuf, another top ranking Syrian Kurdish official, said a new Turkish assault would provoke a humanitarian tragedy, uprooting hundreds of thousands of people. “It will also give succor to the Islamic State,” Yusuf told Al-Monitor.

Like Ahmed, she reckons the risk of a Turkish attack is real. Erdogan is “ready to do anything to secure his seat.” However, she added, attacking her people would be “a big mistake” and “cause immense damage” to Turkey. “Turkey cannot stake its own survival on the destruction of the Kurds.”

Should Turkey do so, “it will be because either Russia or the United States failed to stop Erdogan,” Yusuf contended.

Since the start of the Syrian conflict in 2011, Turkey’s security establishment has viewed Kurdish gains in Syria as an existential threat. American support for the Syrian Kurds has amplified long-running paranoia over supposed Western plans to carve up Turkey and to establish an independent Kurdish state with bits of Iraq and Syria thrown in.

The prevailing sentiment was best summed up by Turkish Foreign Minister Mevlut Cavusoglu today when he said, “The Americans say they understand our concerns but they don’t do anything to address them.”

Erdogan has been testing the waters for some time to bite into further chunks of northern Syria. Until recently Russia was believed to have opposed any such moves. The United States has been more explicit. This week, State Department spokesman Ned Price said the United States was “deeply concerned about reports and discussions of potential increased military activity in northern Syrian and in particular its impact there” including on US Special Operation Forces deployed in northeast Syria.

Price added that Washington expected Turkey to abide by a 2019 agreement to halt its military operations in the Kurdish-controlled zone, saying that maintaining the ceasefire lines was “crucial for Syria’s stability.”

There’s been no clear indication as to where Turkey may focus an attack, whether around Tal Rifaat, Ayn Issa, Kobani or elsewhere, a Biden administration official told Al-Monitor on the condition of anonymity. But the White House is treating Erdogan’s threat as serious, the official said.

Pentagon Press Secretary John Kirby on Thursday echoed the State Department’s concern about Ankara’s intentions, but said he was not aware of any senior-level military dialogue with the Turkish armed forces over the issue.

Kirby said US military officials are in daily contact with Kurdish-led forces in Syria. Ahmed, however, told Al-Monitor that as of Thursday morning, neither US nor Russian officials had offered assurances of security in response to Turkey’s threats.

Ankara, she said, “is talking about a security zone that endangers the lives of millions of people and would cause another humanitarian disaster.”

“Turkey is talking about a distance of 30 km, which includes areas that contain prisons holding thousands of ISIS members,” she told Al-Monitor. Ahmed noted the risk of a potential “catastrophe for international security” should any those prisons again be breached.

It remains to be seen whether US troops will defend their areas of operation if they are encroached upon by Turkish forces or their proxies.  A spokesperson for the US-led military coalition declined to comment on the matter.

James Jeffrey, a former US ambassador to Turkey and the Trump Administration’s top Syria envoy, noted that Turkey already controls large swathes of Syrian territory along its border. Connecting those territories to create an expanded “safe zone” in which to dump Syrian refugees would require taking Russian-controlled areas, such as Kobani and Manbij.

In the October 2019 Sochi agreement, Russia agreed to have the Syrian Kurdish forces leave those zones. However, there is “no evidence that they did so or that Russia even tried,” Jeffrey said. “So my question is whether Turkey is dealing with Russia on this. An incursion into areas where Russian forces are does not sound smart,” he told Al-Monitor.

However, PKK sources speculate that both Kobani and Manbij may prove irresistible. Kobani is where the United States and the Syrian Kurds first forged their alliance against IS in a battle that caught the world’s imagination. Manbij is where Washington failed to keep its promise to Ankara to eject Syrian Kurdish-led forces once the city was freed from IS.

Control of both cities would ease Turkey’s plans to connect areas it controls in the Euphrates Shield zone with those that it invaded in October 2019. Wherever Turkey points its guns, said Yusuf, “we have taken all necessary precautions. We are ready to defend ourselves.”