In addition to economic concerns, the Muslim Brotherhood's dwindling influence in the region and new regional order emerged after the Abraham Accords forced Ankara to mend ties with Egypt. 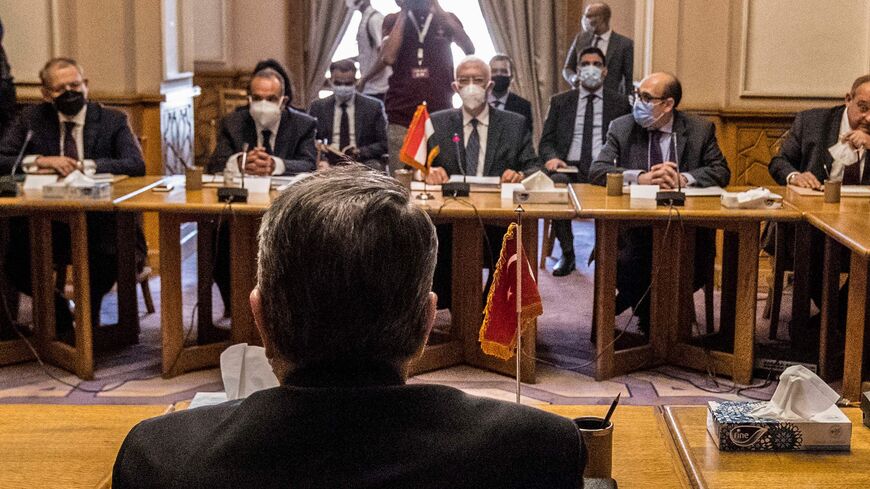 Turkey’s Finance Minister Nureddin Nebati’s upcoming visit to Egypt scheduled for June 1 has created excitement, particularly among Turkey’s pro-government media outlets, as it will mark the first high-level visit from Ankara to Cairo after years of a deep freeze.

Nebati will attend the Islamic Development Bank summit to be convened in the Red Sea resort province of Sharm el-Sheikh, and he is also set to hold talks with “his counterparts” on the sidelines of the meeting, Turkey’s Finance and Treasury Ministry said in a statement without clarifying whether he will also meet with his Egyptian counterpart. The visit will mark the first ministerial-level meeting from Ankara to Cairo in nine years.

Yet despite that Ankara has made a significant effort to reduce the activities of Muslim Brotherhood members based in Turkey, including forcing some of its members to leave the country by not extending their residency permits, the planned visit appears to be failing to generate similar sentiment on the Egyptian side.

Egyptian diplomat and Egypt’s last Ambassador to Turkey Abdel-Rahman Salahuddin, who returned to his country in 2013 as a result of Ankara’s protest of the ouster of the country’s then Muslim Brotherhood-led government, said Cairo was still waiting for more concrete steps from Ankara. Describing Ankara’s efforts as a “step in the right direction,” Salahuddin told Turkey’s independent ANKA news agency, “We hope they follow their statements with more action,” referring to the Turkish government.

Ankara’s halt to its support for the Muslim Brotherhood — which Cairo considers a terrorist organization — remains the major Egyptian demand, with conflicting interests in Libya and Syria standing as other predicaments before the normalization of ties.

Speaking in early May, Turkish Foreign Minister Mevlut Cavusoglu also expressed his disappointment at the “slow” progress in talks with Cairo toward normalization.

Turkey and Egypt’s economic relations are based on trade. Despite the rupture in the diplomatic ties of bilateral relations, trade has continued to flourish, especially for Cairo. “Between 2016 and 2020, Egyptian exports to Turkey grew at an annual average of 7% compared to imports from Turkey that grew at an average of 2%” said Amr Adly of the Carnegie Middle East Center.

Although trade ties and economic cooperation between the two countries remain intact, the political price of Ankara’s diplomatic isolation in the region has forced the Turkish government to improve poor relations with Israel, Saudi Arabia, the United Arab Emirates and finally Egypt.

Islam Ozkan, a scholar who specializes in Islamist movements in the Middle East, describes this price as an “impasse.”

“Turkey’s foreign policy got stuck. Its unintended consequences are one impasse after another in economic and political realms,” he told Al-Monitor. Ozkan also argued that the rapprochement between Ankara and Gulf capitals could also accelerate the slow-going normalization talks between Ankara and Cairo. “Turkey realized the path to normalization of relations with Egypt goes through UAE and the Kingdom of Saudi Arabia,” he added.

According to Zenonas Tziarras, a researcher at the PRIO Cyprus Center, one of the other reasons for Ankara’s effort to mend ties with Cairo is aiming to adapt itself to the regional order that emerged after the Abraham Accords between Israel and Gulf countries.

According to Soli Ozel, a political scientist at Istanbul’s Kadir Has University, another factor stands out as the Muslim Brotherhood’s swiftly diminishing foothold in the region. Speaking to Al-Monitor, Ozel said the visit reflects the “charm offensive” that Ankara has launched as part of its “efforts to normalize relations with” the Gulf countries and Egypt. Ozel added that Ankara ramped up its efforts as the energy crisis fueled by the Russian invasion of Ukraine forces European capitals to find alternative sources for the Russian gas. Turkey stands as a major transit route to carry Middle Eastern gas to Europe.

As political costs of hosting the Muslim Brotherhood rise, Ankara — trying to improve its ties with Gulf capitals and Cairo — appears to have realized that the movement has turned from an asset to a liability.

Tziarras also points out Turkey's economic turmoil as another major factor. “Erdogan is hoping that the normalization of Turkey's regional relations will provide much needed economic opportunities (as seen for example in the case of the reconciliation with the UAE), as the Turkish economy is in deep crisis and threatens his political survival in the upcoming elections,” he said. “It is not a coincidence that Turkish Finance Minister Nureddin Nebati is visiting Egypt next month.”