Humanitarian organizations are struggling to meet the needs of millions of internally displaced Yemenis amid the ongoing war. 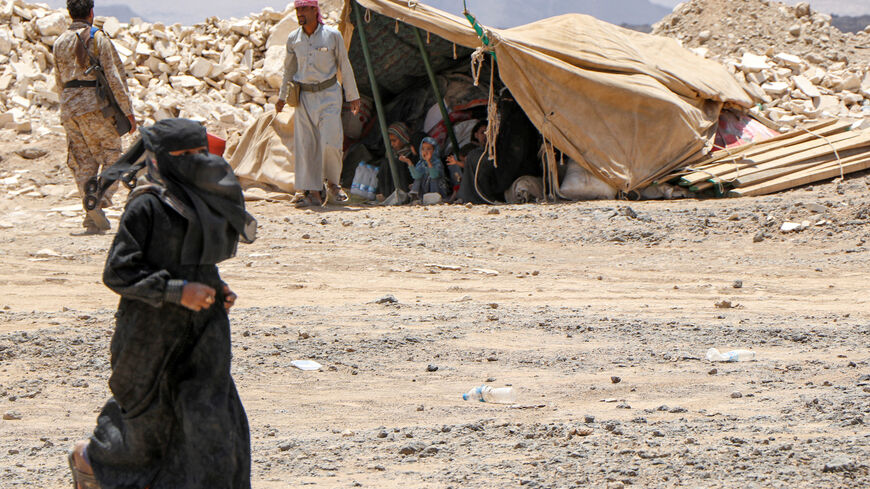 A young woman runs while a fighter approaches a man standing outside a tent with family members inside at a camp for the internally displaced about 10 kilometers on the outskirts of Yemen's northeastern city of Marib on March 28, 2021. - STR/AFP via Getty Images

TAIZZ, Yemen — Words can no longer describe the catastrophic living situation of displaced people in Yemen, who have been sleeping in the open in deserts and valleys, fleeing the raging war ravaging their country.

For seven years now, Yemenis have been forcibly displaced in their own homeland, eagerly awaiting stability and peace to reign again so they can return to their homes and reintegrate into society.

Abdullah Ali, who hails from the Abs district of the Hajjah governorate in northwestern Yemen, told Al-Monitor that he had to flee his hometown of Abs to al-Juba district in the Marib governorate before he was forced to move again, this time to Wadi Obaida district, escaping Houthi attacks back in 2021.

Ali now lives in a dilapidated tent in the desert in Wadi Obaida in constant search of safety.

“As a result of the fluctuation in temperatures and the heat of the desert sun, my children are now suffering from rashes and blisters caused by the heat,” he said.

Ali added, “To bring water for my children, I have to walk for 1.5 kilometers to the nearest city (Marib). I don’t have any means of transportation. Sometimes, I ask my neighbor to accompany me.”

“Hospitals and basic services are also far from us. Some mobile clinics visit our area, but they don’t have all the medicines we need, such as sedatives. We also lack new blankets and mattresses. The ones we are using are old and in very bad condition,” he said.

“We are trying to lead a normal life after despair took over, and we have come to realize that the humanitarian organizations’ aid is not sufficient. If we ever get some financial assistance from them, they bombard us with phone calls to document everything. It is also a humiliating process to receive financial aid, as it costs a great deal to go to the location where financial aid is being distributed. Sometimes, we find ourselves forced to forget about it altogether,” Ali said.

Majed Fadael, undersecretary of the Ministry of Human Rights of Yemen’s internationally recognized government, told Al-Monitor that “there are severe shortcomings in the aid distribution on part of international organizations — most of them are struggling amid the current food crisis worldwide, which is only worsening.”

“The number of internally displaced people has increased as a result of the ongoing conflict, reaching 4.2 million, according to the United Nations. Half of them are based in Marib, where most of them are in danger and face great challenges to have access to humanitarian aid because of the war and the continuous Houthi attacks despite the truce, which was repeatedly violated in the city,” Fadael said.

“These people have been displaced more than once and are in dire need of shelter, basic materials, water and hygiene, health and education facilities, as well as child protection services,” he added.

A lot of diseases spread among displaced people, such as acute diarrhea, malaria and respiratory infections. There is a real concern of the spread of infectious diseases. Therefore, it is of paramount importance to get moving to come to the aid of these people, which is what we call on organizations to respond to first,” Fadael said.

Mohammed al-Maqrami, media director of the Coalition of Humanitarian Relief, told Al-Monitor, “Yemenis are living on aid, some of them surviving on one meal per day. We value all the relief efforts, and we appeal to the consciences of the world, but mainly those of our Yemeni decision-makers and warlords who have never considered the scale of the tragic catastrophe that only the Yemeni people are paying for since the fateful military coup,” referring to the Houthis’ takeover of Yemen in 2014.

“The displaced people are the most persecuted ones who are suffering the brunt of the war, with no shelter, no water, no education for their children, nothing. All they wanted was to live in peace away from the hellish war that is relentlessly chasing them from one governorate to another, without any radical solutions in the offing. This has become very painful to discuss,” he added.

Meanwhile, Saif bin Nasser Muthana, director general of the state Executive Unit for the Management of Internally Displaced People Camps in Marib, told Al-Monitor, “The displaced families in Marib are trying to survive day by day through social solidarity and limited capabilities, humanitarian initiatives by philanthropists, as well as aid programs and projects on part of humanitarian organizations, which contributed at a minimum level to providing basic services to the families.”

“Most of them had to deal with multiple violations in addition to their forced displacement. Some were subjected to confiscation of their money and properties, while others faced arbitrary arrests. Many households lost all income and breadwinners and have been facing great challenges and hardships to survive,” he added.

Muthanna said, “The hosting community in Marib received the displaced with a great sense of humanitarianism by sharing public services and providing housing, water and electricity, despite the fact that this caused the city’s services to become overstretched due to the great incoming numbers in the education, health and communications departments.”

“The local authorities are seeking to further facilitate humanitarian response efforts to the displaced families in a bid to alleviate their daily suffering and strengthen their humanitarian presence in the largest displaced communities in the country,” he added.

Fahmy Mansour, head of the Benevolence Coalition for Humanitarian Relief in Hadhramaut governorate, told Al-Monitor, “Displacement is an extreme and forced emergency situation that thousands of Yemeni families have gone through in order to preserve their lives because of the war.”

“The lucky ones are those who can make ends meet in the displacement camps. But for most, this remains a difficult feat, especially the families who lost all sources of income, their breadwinners or are vulnerable families,” he added.

“There are various humanitarian actions carried out by organizations, whether international, regional or local, through which the displaced receive humanitarian assistance, but at the minimum levels of food security, shelter, water and other basic services,” Mansour said.