As nuclear talks remain stalled, a spokesperson for Iran's Foreign Ministry doubled down on threats to avenge the killing of top Iranian commander Qasem Soleimani. 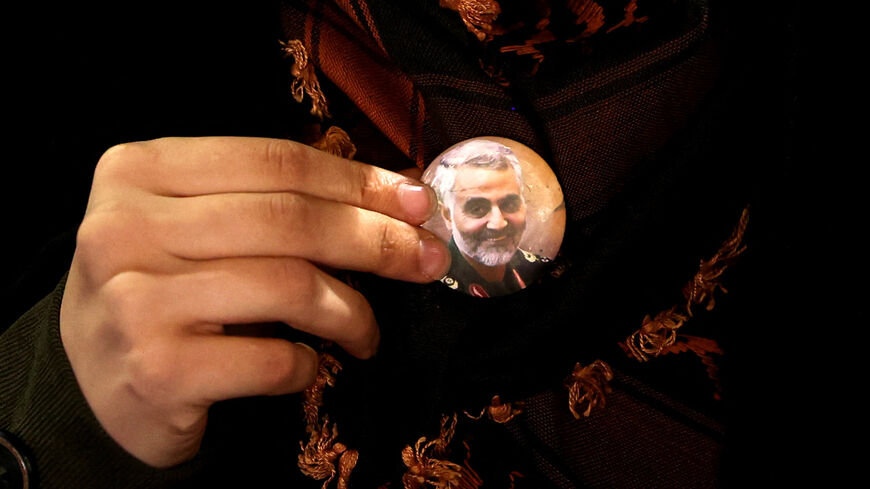 An Iranian man hold a pin with a portrait of slain top Iranian commander Qasem Soleimani during a ceremony commemorating the second anniversary of his killing in the capital Tehran, Jan. 3, 2022. - ATTA KENARE/AFP via Getty Images

“It is a definite principle in the foreign policy of the Islamic Republic of Iran that [those involved in Soleimani's killing] must be brought to justice,” Iranian Foreign Ministry spokesperson Saeed Khatibzadeh said Monday, according to Al Arabiya.

“The basic principle in the foreign policy of the Islamic Republic of Iran was formed after the cowardly assassination," he said. "The action taken by the perpetrators and advisers of this cowardly act will not go unpunished.”

In January 2020, a US drone strike in Baghdad killed Soleimani, who led the IRGC’s powerful overseas wing known as the Quds Force. Last week, a senior Revolutionary Guards commander said even the killing of all American leaders wouldn’t go far enough to avenge his death.

Why it matters:  Khatibzadeh’s comments come after Iran reportedly rejected the Biden administration’s proposal to drop the IRGC from its formal list of foreign terrorist organizations in return for assurances from Tehran that it would not target Americans connected to Soleimani's killing.

The State Department has reportedly spent millions of dollars providing protection for former Secretary of State Mike Pompeo and former Iran envoy Brian Hook amid “serious and credible” threats from Iran. The pair spearheaded the Trump administration’s so-called "maximum pressure" campaign of sanctions against Tehran that included the IRGC’s designation as an FTO in April 2019.

What’s next:  Talks aimed at restoring the landmark nuclear agreement are held up over Iran’s demand that the IRGC be removed from the US terror blacklist. Biden administration officials have said that the onus remains on Iran to resolve the standoff.

Know more:  If the United States revokes the IRGC’s terror designation, the organization would remain subject to a range of other sanctions that would deter foreign investment. But during an Al-Monitor event last Thursday, Israeli Ambassador to the United States Michael Herzog said its removal would send a “terribly wrong message.”