The number of Christians in Jerusalem continues to dwindle amid ongoing political instability and deteriorating economic conditions, prompting local churches and clergy to sound the alarm. 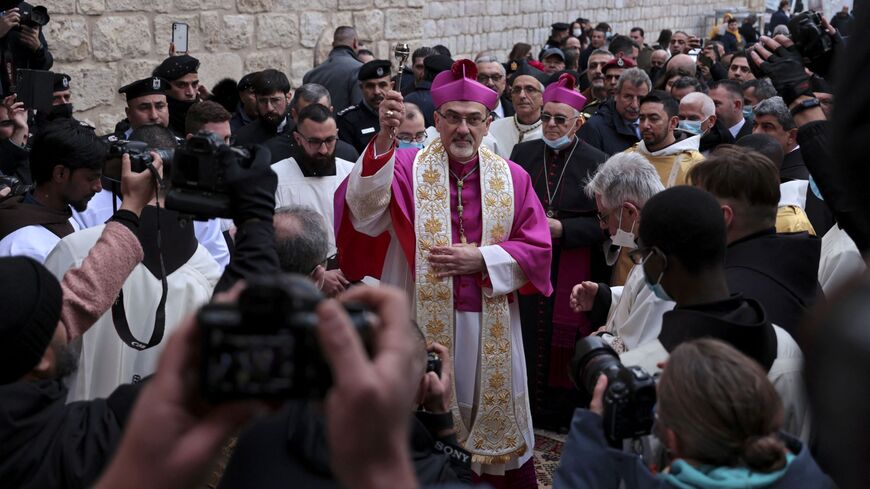 Pierbattista Pizzaballa, the Latin Patriarch of Jerusalem, greets people as he arrives to the Church of Nativity during Christmas celebrations in Bethlehem, in the Israeli-occupied West Bank Dec. 24, 2021. - ABBAS MOMANI/AFP via Getty Images

RAMALLAH, West Bank — The number of Christians in Jerusalem is steadily declining due to the political instability and the deterioration of the economy, and they now make up less than 1% of the city’s population.

Four years after leaving Jerusalem for Chicago in the United States, Clara Nasrallah, 27, finds it very difficult to return to her homeland today, especially after she became a mother.

Clara was born and raised in the Muslim Quarter of the Old City of Jerusalem, and she studied business administration at Bethlehem University. In 2018, she married a man who lived in the US and moved there with him.

She told Al-Monitor, “Before marriage, I was against the idea of ​​migration, and I was always wondering why people emigrate. I had a deep attachment to Jerusalem, but marriage was a turning point for me.”

“Before having a child, I could think of returning to Jerusalem one day. But after becoming a mother, it became difficult to return for many reasons, including job opportunities, stability and freedom that are available here. Jerusalem is my city, and I hope the situation improves one day so I can return,” she added.

Nasrallah's husband immigrated with his family to the US more than 10 years ago, after his father got a job opportunity, and then her husband studied and established a career in the US. She noted that jobs and stability are hard to find in Jerusalem due to the Israeli occupation.

“I have uncles and aunts who left the country for the US and Australia years ago, and everyone who had an opportunity abroad left. The situation in Jerusalem did not allow for work, securing a stable life and building a future for children, especially Christians who feel like a minority,” she said.

The number of Christians in Jerusalem is rapidly declining, due to  political and security instability and the poor economic conditions that have worsened with the COVID-19 pandemic.

Wadih Abu Nassar, the spokesman for the Council of Heads of Catholic Churches in Jerusalem, told Al-Monitor that the number of Christians in Jerusalem has fluctuated throughout history. While they made up about 25% of the population in Jerusalem in 1922, they now constitute less than 1% (less than 10,000 people).

“Jerusalem is a city of the three religions — Islam, Christianity and Judaism," Abu Nassar said. "Christianity is almost disappearing, and this is an element of concern for the city’s character and identity. The numerical minority, whether ethnic, sectarian or religious, lives in turmoil and worry more than any other group.”

To keep Christians in the city and support their resilience, Abu Nassar said that churches are taking care of poor families and creating housing projects, job opportunities and schools.

The COVID-19 pandemic worsened the situation in several ways. Foreign donations to churches decreased, and so did tourism, in which a large segment of Christians work. Many were dismissed from their jobs as a result. Also, churches were closed for various periods, and Christian properties and holy sites in Jerusalem were not spared from the settlement projects.

The patriarchs and heads of the churches in Jerusalem expressed in a joint statement in December 2021 their concern about the “current threat to the Christian presence in the Holy Land,” stressing that “In all parts of the city of Jerusalem, Christians have become the target of repeated and continuous attacks by extremist groups.”

The statement cited "countless physical and verbal attacks against priests and other members of the clergy, not to mention attacks on Christian churches, vandalism and desecration of holy sites as well as constant intimidation of local Christians who simply seek to carry out their rituals freely and go about with their daily lives.”

The tactics are "a systematic attempt to push the Christian community out of Jerusalem and other parts of the Holy Land,” they asserted.