An upcoming change to Turkey's election law could boomerang and hurt Turkish President Recep Tayyip Erdogan and his ruling party. 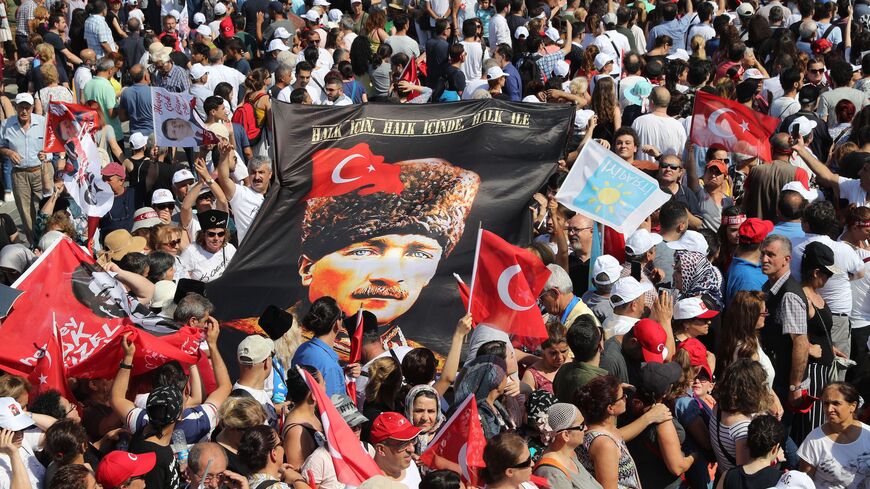 Turkey’s ruling party and its de facto coalition partner revealed a long-awaited draft amendment to the country’s election law March 14. The bill is expected to become law in April with the alliance’s majority vote. According to Turkey’s constitution, electoral changes must come into effect at least one year before elections, meaning that it's too late for the bill to affect any snap elections before the general and presidential elections scheduled for 2023.

Erdogan has been talking about an overhaul in the election law since last year, promising “a very different” electoral system. A senior bureaucrat working for the Ministry of Interior told Al-Monitor on condition of anonymity, “Experts studied this bill over a year and there were different proposals, simulations run. They picked this version.”

The changes that the draft introduced in the country’s electoral system affect vote distribution, election monitoring and presidential privileges.

First, the draft lowers the country’s notoriously high threshold for a party to win parliamentary seats from 10% of the national vote to 7%.

According to Kemal Ozkiraz, founder and chairman of the Avrasya polling company, the move might motivate small parties to form coalitions of their own, apart from the major parties. Yet the change also allows the ruling Justice and Development Party (AKP) and its ally the Nationalist Movement Party (MHP) to enter the parliament, as their vote shares are projected below 10%, Ozkiraz argued.

The bill is a reversal of the 2018 alliance system that allowed parties to form alliances in a bid to clear the 10% threshold together but remain distinct. The coalitions received a percentage of the overall vote and then the seats were distributed proportionally.

The bill aims to eliminate the alliance vote-sharing system. Each party will instead win seats based in a proportional system called the D'Hondt system. Accordingly, small parties with a vote share of 3-4% will not be able to win any seats.

Gokhan Ozbek, director of the independent 23 Derece YouTube news channel, calculated how the votes would have been distributed if the amendment had been in effect during Turkey’s 2018 general election. According to his findings, the AKP and its coalition partner would have gained 12 and four more seats, respectively.

Turkey’s pro-Kurdish People's Democratic Party (HDP), meanwhile, would also have won four more seats. Its gains would have cost the main opposition Republican People’s Party (CHP) 15 seats and its ally the Good or Iyi Party another five, meaning the Good Party would not have won any seats if the new law had been in effect in 2018.

However, Ozkiraz and Ozbek concurred that the AKP’s vote share, which had been some 42%, today ranges between 25% and 35%, so the new bill could backfire and hurt the ruling alliance.

Professor emeritus of public law Levent Koker told Al-Monitor, “On the basis of the 2018 vote distribution, the AKP-MHP coalition would gain the advantage with this law, but that advantage could turn into disadvantage in 2023 if the vote distribution is different. Small right-wing parties in the opposition coalition might enter the election as a part of a bigger party to overcome this hurdle.”

If the ruling alliance’s goal was to shock and awe in a bid to dismantle the opposition, so far it hasn’t worked. The mood among left-leaning politicians and political pundits in Ankara has been sanguine. The CHP’s leadership appeared unfazed, with its parliamentary leader Ozgur Ozel commenting in a televised interview, “The AKP will fall into the trap they are setting for us.”

Yet, he also warned that should the HDP be shut down as a result of an ongoing trial — a Turkish prosecutor filed a case with the constitutional court last year demanding a ban on the party over alleged ties to outlawed Kurdish militants — the new law will make it almost impossible for the Kurdish politicians to form another political party to enter the election.

Under the bill, a political party must have organizations in 41 out of Turkey's 81 provinces and hold party conventions to run in the elections. If the HDP is banned from politics a few months before election day, doing so won’t be possible.

Al-Monitor conducted exclusive interviews with two CHP parliamentarians on the bill. Both were confident in their party organizations and winning prospects by a wide-margin victory regardless of the electoral changes.

Deputy chair of the CHP Muharrem Erkek told Al-Monitor, “This proposal is a sign of the government’s deep fear of losing. They suggest transitioning into a presidential system, but they still cannot remove the national threshold. What purpose does it serve now?”

“Our concern is to revive a democratic system where laws are respected. Their concern seems to be, ‘How can we get a few more deputies?’” Erkek added.

The bill also alters the election-monitoring process. CHP lawmaker Alpay Antmen told Al-Monitor, “One of the proposed amendments is the introduction of a lottery system for the justices who oversee the electoral process.”

“The independence of the judiciary has been under scrutiny in Turkey, and this could easily be seen as another attempt to change the playing field. But it will not be sufficient this time.”

Antmen said, “The goal is to reduce the number of observers. But we are ready with our trained personnel to stand by each ballot box to get all the votes counted.”

Meanwhile, the draft also provides a blank check to Erdogan to utilize public resources for campaigning.

Former AKP insiders and conservative outlets have rung alarm bells about the proposal. For example, former AKP lawmaker Mehmet Ocaktan penned a searing piece asking, “For whom is the election law trap set?”

The AKP has been worried about small conservative parties emerging as potential alternatives. Those small parties can join with the larger opposition, but the AKP predicts conservatives will not vote for the left-leaning, secular CHP. The question here is how determined the right-wing opposition groups are to replace Erdogan.

Another crucial issue is what will happen to the Kurdish vote if the HDP gets banned. The AKP apparently expects to collect its seats in Kurdish-majority cities. Once again, the opposition will be tested on whether it can stand united against Erdogan in every stage of the electoral process.