Many unemployed Syrians have embarked on dangerous search and excavation operations for money, gold and weapons left by the Islamic State in Deir ez-Zor governorate. 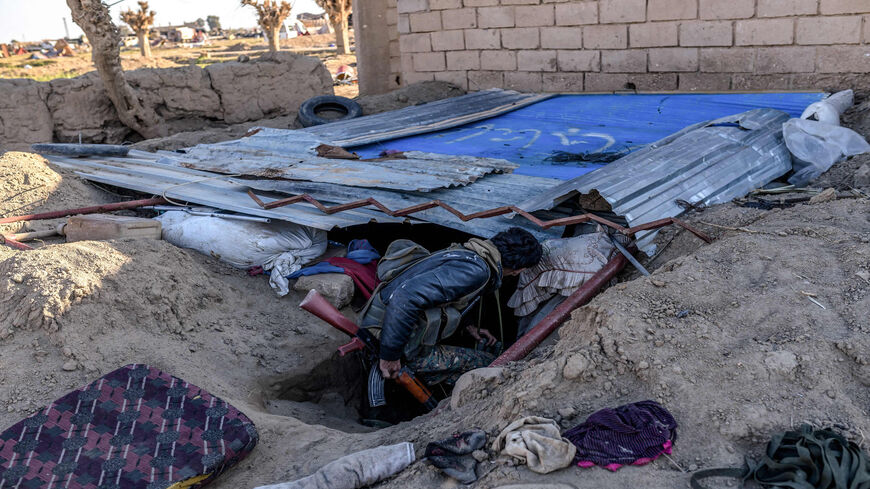 A fighter with the Syrian Democratic Forces inspects a makeshift shelter dug in a trench at a makeshift camp for Islamic State members and their families in the town of Baghouz, Deir Ez-zor, Syria, March 9, 2019. - Bulent Kilic/AFP via Getty Images

ALEPPO, Syria — Deir ez-Zor governorate in eastern Syria has been witnessing widespread search and digging operations for gold, money and weapons that were left behind by Islamic State (IS) militants when the terrorist group took hold of the province between 2013 and 2019. In March 2019, IS lost its last strongholds in Syria to the Syrian Democratic Forces (SDF) backed by the international coalition.

Residents in the towns of Baghouz, Safna and other towns in SDF-controlled Deir ez-Zor have been complaining about an uptick in excavations that have reached their backyards, cemeteries, agricultural lands and the rubble in neighborhoods and towns destroyed by the airstrikes in the area.

Zayn Mohammad, a civil activist who lives in the SDF-held eastern countryside of Deir ez-Zor, told Al-Monitor, “The excavations for money, gold and weapons that IS left behind in the area are not something new here. This phenomenon actually began when IS lost its last stronghold in eastern Deir ez-Zor in 2019.”

He said, “The digging operations have recently increased and expanded, with hundreds of people joining groups searching for IS treasures, despite the dangers of such activity. These people are looking for anything left by IS inside hideouts, caves and buildings that the group used as shelters or headquarters for its militants. This phenomenon is mainly due to the worsening poverty and unemployment affecting the local community, notably young people in Deir ez-Zor countryside."

Mohammad noted, “The excavators are constantly digging near their homes or those of their neighbors and lands on the outskirts of the towns in search for gold and money. Many families in the area fear that children might fall into the ditches and pits as some of them are 3-4 meters deep. This is taking place amid an absence of any law or authorities banning excavations or at least requesting these individuals to backfill the trenches.”

He added, “The search and excavation operations also include digging in cemeteries and mass graves, notably in the Baghouz camp, which includes dozens of mass graves belonging to civilians and IS members who were killed in the international coalition airstrikes and during the battles."

“Many diggers found IS weapons, gold coins, gold jewelry and large sums of money, mostly US dollars, in recent searches. A large part of the money and gold were buried with their owner in mass graves. I personally know a digger who was digging and came across the grave of a woman on his farmland; it seemed the deceased woman was close to IS, as he found gold and more than $5,000 in her grave,” he said.

Mohammad continued, “These excavation operations in the area have often caused clashes between local clans, because of the exhumation of mass graves belonging to IS operatives in Baghouz and other towns, as clans and residents have been competing to get their hands on such treasures."

Excavations are also spreading in the regime-controlled areas in the countryside of Deir ez-Zor, and are largely concentrated in the neighborhoods that were previously under IS control in the city of Deir ez-Zor, and the cities of al-Bukamal, al-Mayadin, Muhassan, al-Meriyah, Burqus and al-Boleel.

In the regime-controlled areas, diggers are vying with the regime forces and Iranian forces that are deployed in the area and also digging for IS valuable remains, prompting civilian diggers to go around their operations in secret and at night.

Ahed Salibi, who works at Naher Media, a news website covering news in Deir ez-Zor and eastern Syria, told Al-Monitor, “The regime forces had a lead on IS tunnels, hideouts and warehouses when the group controlled several neighborhoods in Deir ez-Zor and its countryside on the right bank of the Euphrates River, after questioning former IS members who have recently reached settlements with the regime.”

He said, “The excavations in search of IS tunnels, headquarters and secret hideouts have been taking place late at night and into the early hours of the morning, when the curfew is active in the areas where the regime has been doing its own digging during the day."

Salibi noted, "By the end of 2021, the Iranian forces were searching inside the destroyed Commercial Bank building in the city of al-Mayadin in the eastern countryside of Deir ez-Zor. It was a three-story building, in addition to a basement that was bombed by the international coalition in 2017.”

He added, “The Iranian forces removed part of the rubble and dug a hole to access the basement, where they found several tunnels linking the building to nearby surroundings. The basement also contained money and a large quantity of gold as well as documents belonging to IS, in addition to weapons."

Over the past few weeks, excavations in the regime-held areas in Deir ez-Zor have increased after the Syrian government reached settlements and reconciliation with thousands of the area’s residents who were wanted by the security forces or had dodged military services. The regime was able to locate many IS hideouts as a result of these settlements and agreements with former IS members who hail from Deir ez-Zor.