Turkish Airlines, Emirates and others have stopped flight services to Afghanistan following the Taliban takeover of the capital Kabul and US military withdrawal. 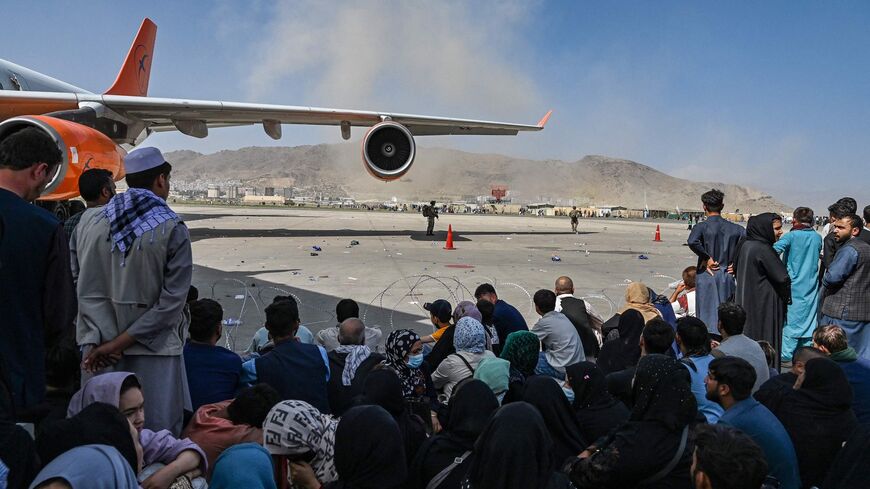 Afghan people sit as they wait to leave the Kabul airport in Kabul on Aug. 16, 2021, after a stunningly swift end to Afghanistan's 20-year war. - WAKIL KOHSAR/AFP via Getty Images

Some Middle Eastern airlines have suspended flight services to Afghanistan amid the US withdrawal from the country and the Taliban takeover.

The budget carrier Flydubai temporarily suspended operations to the international airport in Kabul, a spokesperson told Al-Monitor on Monday. The spokesperson added that the airline will revise its plans based on directives from authorities. Dubai’s other airline Emirates also suspended flights to and from Kabul on Sunday due to the situation, according to a release.

The Taliban seized control of the Afghani capital Kabul on Sunday. The Islamist movement, which ruled Afghanistan before the US invasion in 2001, has captured large swaths of the country recently after US President Joe Biden decided to withdraw American forces. Just days ago, US intelligence predicted it could take three months for the Taliban to take Kabul. Pentagon Press Secretary John Kirby said Kabul was calm on Sunday and that the US Embassy would remain open. Hours later, the embassy was evacuated and the Taliban moved into the presidential palace.

The situation at the airport, where US forces remain to assist with evacuations, has grown chaotic. Videos on social media showed people climbing onto a plane, with some tragically falling from the aircraft after it took off.

It is unclear when regional airlines could resume flights to Kabul. Plans for Turkish forces to remain in Kabul to protect foreign diplomatic missions are in flux due to the rapid Taliban takeover. In addition to the US Embassy, the Saudi Embassy was evacuated on Sunday. Several European states also began evacuating their diplomats. Iran reduced its diplomatic staff in the country but is keeping its missions open.