Foreign minister says potential disruptions from dam could be like a "malignant plague" for Egypt. 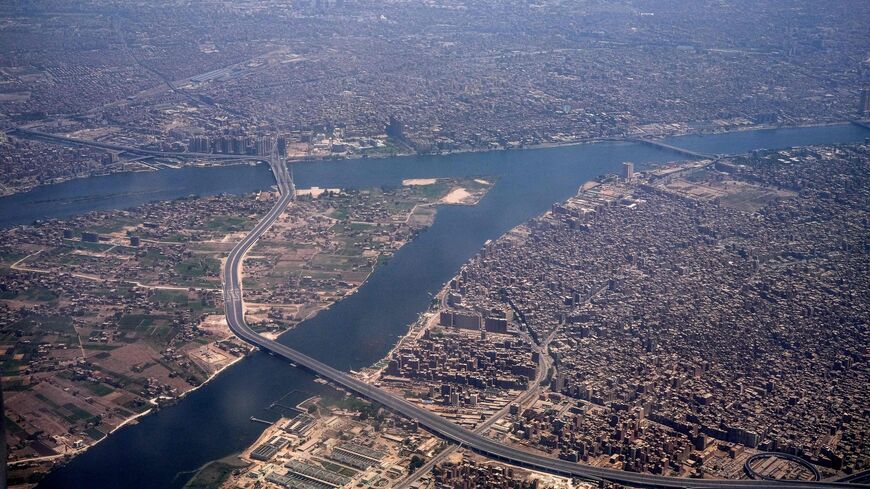 An aerial view of the Nile River is seen on May 14, 2021, on the northern outskirts of Egypt's capital, Cairo, and shows the 2019 Tahya Misr (Long Live Egypt) Bridge (at top left of photo) that crosses to the Nile island of Warraq. - AMIR MAKAR/AFP via Getty Images

Shoukry: "This is a situation that Egypt cannot, and will not, tolerate"

Egyptian Foreign Minister Sameh Shoukry didn’t mince words in making his case Thursday to the UN Security Council that the dispute with Ethiopia over the Grand Ethiopian Renaissance Dam (GERD).

"Egypt — a nation of over 100 million souls — is facing an existential threat," Shoukry told the council. "A grand structure of mammoth proportions has been constructed across the artery that bequeaths life to the people of Egypt.”

Egypt depends on the Nile River for more than 90% of its water. The dam has the potential to disrupt the supply of water to Egypt and Sudan, which have sought a mediated solution, with international guidance and supervision, to help manage and guarantee the flow of water to their countries.

Ethiopia has taken a nationalist tack in the dispute, resisting calls for an international-mediated agreement among the parties for management of water flows downstream from the dam, which is still several years from being fully operational. The government says the dam could transform Ethiopian development, with the prospect of Addis Ababa becoming a regional superpower in the production and export of hydroelectric power.

This is the second time the Security Council has taken up the GERD. The last time, in June 2020, Ethiopia had begun the first filling of the dam, reaching 4.9 billion cubic meters of water. Ethiopia began the second filling last week, on July 5, without an agreement with Egypt and Sudan on water flow.

For Egypt, as well as Sudan, the mediation efforts of the African Union over the past year have hit a dead end.

The criterion for matters to be taken up by the Security Council is that the issue must meet the standard of Article 34 of the UN Charter and "endanger the maintenance of international peace and security."

Shoukry said the potential water shortages caused by the dam, without an agreement on its use, would affect Egypt like a "malignant plague."

Egypt's minister of water resources and irrigation, Mohamed Abdel Aty, warned European officials earlier this week that the impact of massive water disruptions could include waves of illegal immigrants to Europe, as Ibrahim Ayyad reports here.

"This is a situation that Egypt cannot, and will not, tolerate," Shoukry said at the council session, adding that if Egypt’s "riparian rights are jeopardized or if its survival is imperiled, Egypt will be left with no alternative but to uphold and protect its inherent right to life that is guaranteed by the laws and customs of nations and the imperatives of nature."

Shouky’s preferred next step would be a Security Council resolution that would bring a new force to African Union diplomacy, but the signs so far are not promising.

Immediately following the session, Tunisia, the only Arab member of the Security Council, submitted a draft resolution calling for a binding agreement among the three parties.

But the draft resolution has so far generated little interest, aside from Egypt, and is unlikely to be taken up.

A high-level U.S. official told Al-Monitor, "There’s no enthusiasm among council members for a resolution at this point. The message was sent by yesterday’s discussion that the council members expect the three parties to use the talks led by the African Union to come to an agreement."

Ambassador Linda Thomas-Greenfield, the US representative to the Security Council, added that the US will continue to help facilitate a solution to the AU talks, saying , "The African Union is the most appropriate venue to address this dispute, and the United States is committed to providing political and technical support to facilitate a successful outcome. We urge the African Union and the parties to use the expertise and support of the three official observers — South Africa, the European Union, and the United States — as well as the United Nations and other partners to help achieve a positive outcome."

Thomas-Greenfield referred to the 2015 Declaration of Principles and the July 2020 statement by the African Union Bureau as "foundational references" for the conflict.  Left out, however, was reference to the January 2020 Joint Statement of Egypt, Ethiopia, Sudan, the United States and the World Bank, agreed and negotiated at the ministerial level of the three countries to the dispute, thanks to US and World Bank mediation, but which Ethiopia ultimately refused to ratify.

Russia appeared even more lukewarm to stepped up international mediation or a resolution.

“We presume that increasing the number of mediators and observers at the negotiations is not likely to add value to the process," said Russia’s permanent representative, Vassily Nebenzia, at Thursday’s Security Council session. "However, this can be done given consent of all sides."

Was the Security Council the last stop for diplomacy?

Last week this column asked if the UN Security Council session would be "the last diplomatic stop in Nile Dam dispute."

"The Security Council provided auspicious opportunity for Egypt to make its case internationally on the serious ramifications of the GERD dam," Nabil Fahmy, a former Egyptian foreign minister and founding dean of the School of Global Affairs and Public Policy and distinguished university professor of practice in international siplomacy at the American University in Cairo, wrote in an email to Al-Monitor.

"The message was clear," Fahmy writes. "Act commensurately or we will."

In addition to its coordinated diplomacy in dealing with the dam, Egypt and Sudan have also deepened military and economic ties over the past year, as Mohamed Sabry and Rasha Mahmoud explain. Cairo has also deepened security and economic relationships with several of the 11 Nile Basin countries, including Tanzania and Kenya, as Muhammed Magdy writes.

Although the council has acknowledged the severity of the issue with a second meeting in two years on the dispute, a resolution is still a tough sell. Council members remain uneasy about the precedent of a resolution on 'water issues.'

If the Security Council session doesn’t spur a resolution, or some other type of new diplomatic pressure on Ethiopia, then Egypt’s efforts to "internationalize the GERD crisis have ended in disappointment," Samuel Ramani, nonresident fellow at the Gulf International Forum, said in an email to Al-Monitor.

The absence of a resolution does not mean the end of diplomacy, however, and the council session could spur other players to step up, in addition to the role of the observers to the AU talks — the United States, the EU and South Africa.

Other "want-to-be mediators these days are regional powers in the Gulf, such as the UAE, Qatar and to a lesser extent, Saudi Arabia and Turkey," Ramani added.

The United States remains committed as well to its intensive quiet diplomacy led by Jeffrey Feltman, the US special envoy for the Horn of Africa.

The catch is that US priority in the Horn, and with Ethiopian Prime Minister Abiy Ahmed, is the crisis in Tigray, with mutual accusations of atrocities committed by Ethiopian and Eritrean militaries and proxy forces. The international diplomacy over the crisis in Tigray won’t necessarily spill over into the dam talks.

The Security Council and the EU "see Tigray as an international issue which impacts human rights norms," Ramani writes, "but they see the GERD as a local and regional issue."