Turkey’s Religious Affairs Directorate, which has long lamented the influence of foreign cartoons on children, now seeks to establish a kids channel. 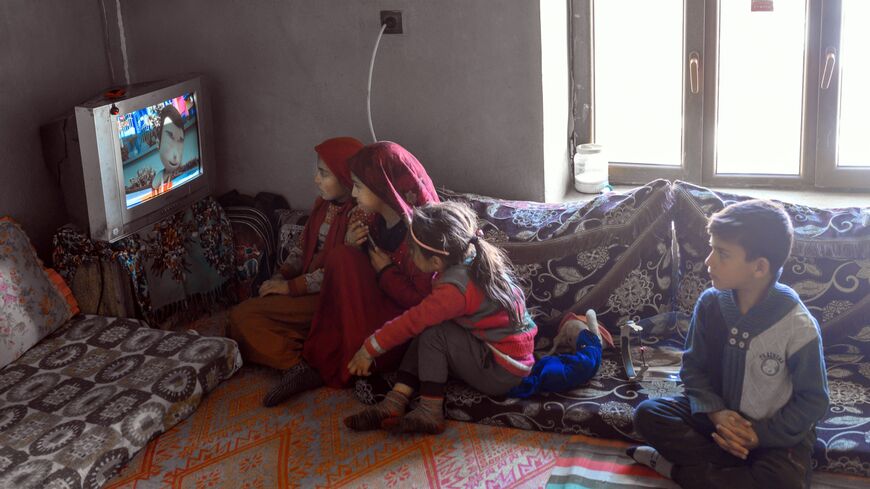 Children of the Saymez family watch cartoons on TV while older relatives are given COVID-19 vaccines by the Bahcesaray public hospital vaccination team at the village of Guneyyamac in eastern Turkey on Feb. 15, 2021. Turkey's religious directorate is planning to start a new TV channel for kids. - BULENT KILIC/AFP via Getty Images

Turkey's ever-growing Directorate of Religious Affairs, which has long lamented “foreign influence” on Turkey’s children and young people, announced earlier this month that it planned to launch a children’s channel to introduce “national and Islamic values” to preschool kids.

“We haven't been able to introduce our values ​​to our children for years. We tried to feed our children with translated and foreign cartoons,” Ali Erbas, the president of Diyanet (as the directorate is called in Turkish), said at the signing of the protocol with state-run broadcaster Turkish Radio and Television Corporation (TRT) on June 7.

“However, we need to support and nurture them with our own national values. We know that 70% of human character is formed in childhood, before the age of 7 years. ... We will help mold our children’s character with programs that are factually correct and based on the Quran and Sunnah [acts of the Prophet Muhammad that are exemplary for believers],” he added.

“The director’s words hardly indicate a pedagogical approach to a children’s channel,” Okan Konuralp, a member of the Radio and Television Supreme Council member and a journalist and sociologist who has written extensively on Diyanet, told Al-Monitor. All new channels have to come before the council for approval. Given that the board is dominated by government-appointed members, there will be no problem with approval.

Konuralp, nominated by the opposition Republican People’s Party, sees the establishment of the channel more as political posturing than having an actual impact. “If you want to launch a channel that aims to instill universal values, follow a pedagogic formation, and have the welfare of children at heart, there is no problem. But if the intention is to add to the thousands of archaic publications, religious cliches, there are already so many of them around,” he said. “This is the social engineering the government wants, but, alas, cannot achieve no matter how insistently and arrogantly it tries.”

Diyanet, whose $1.6 billion budget is twice that of the Foreign Ministry, already has a religious channel in cooperation with the TRT; that channel was established in 2012. Its 24-hour broadcasts range from the lives of Ottoman sultans to “Ask Diyanet,” which tackles problems of modern life (“It is not a sin to divorce, either for men or women, if you have exhausted all possibilities of reconciliation, including going to the family counseling centers at the local offices of Diyanet,” it advises).

It also has several hours of children’s programs, such as the animated “Yusuf’s World,” where the 7-year-old Yusuf’s pious grandfather explains how Turkey’s national anthem was inspired by the Quran and Yusuf teaches Islamic ablution to a friend. It is a reflection of the directorate’s “Children’s Page,” which has clips of children joyously running around in a mosque or shows a conservative household where the mother is responsible for all the housework.

An image showing executions and decapitation on a new children’s magazine by Diyanet-Sen, the union of Diyanet employees, has been slammed on media, social media and among opposition politicians on June 13. “Stop
poisoning our children’s minds,” tweeted CHP deputy Yıldırım Kaya.

Why does Diyanet want to open a new children’s channel, particularly when the TRT, which unreservedly toes the government line and upholds its priorities, has a rather successful children’s channel? The ratings of TRT Cocuk (TRT Kids), at 0.44%, are better than those of the Disney Channel and Cartoon Network combined, according to the ratings provided by the TIAK television research company. The same evaluation puts Diyanet TV as one of the least-watched at 0.02%, with rates even lower during the day, when there are cartoons.

“This is probably because Diyanet finds TRT Cocuk too Western-oriented and secular,” a veteran employee of the TRT who requested anonymity told Al-Monitor. “TRT Cocuk broadcasts 'Heidi,' the Vikings and other Western cartoons — the very same ones that Erbas criticized right in front of TRT Director Ibrahim Eren, who says in all internal and external meetings that TRT Cocuk, along with TRTWorld, is a success story.”

“The establishment of a children’s channel by Diyanet is no surprise, given that the legal amendments to Diyanet’s status in 2010 give it the task of providing religious guidance to the family, women, youth, and all other sectors of the society. Following that, the directorate has become ever more vocal on all areas of daily life, particularly on family affairs, women, education of children and youth,” Burcu Karakas, journalist and author of a recent book “We are Everything: Diyanet at Work,” told Al-Monitor.

Karakas’ book takes an in-depth look at Diyanet, an institution that was created by a special law a year after the republic was founded in 1923, and its ever-increasing influence both inside and outside Turkey under the Justice and Development Party (AKP). “Diyanet’s activities ... are implemented to accelerate the social transformation that the ruling party desires,” writes Karakas in the epilogue of her book.

These activities, ranging from preschool Quranic courses to children’s cartoons that advocate conservative family values, all tie into a larger picture: President Recep Tayyip Erdogan’s oft-repeated goal of creating a pious generation that espouses Islamic values and will work for “the construction of a new civilization.”

A major pillar of this policy is imam hatip secondary schools. The president often pays homage to these public secondary schools, which offer extensive Quranic studies, citing “past injustices” to students, including himself. In 2017, he opened the school year in Istanbul’s Fatih district at his alma mater, revamped at the cost of $11 million and renamed Recep Tayyip Erdogan Anatolian Imam Hatip school. Similarly, the government revived other existing imam hatip schools and built new ones across the country, doubling their number from 854 in 2013-14 to 1,651 in 2019-2020. Yet many students did not want to attend them, no matter how hard the government pushed. Several imam hatip schools in the provinces of Batman, Bursa, Kocaeli and Sanliurfa were closed down due to a lack of students.

Attempts at preschool religious education revolve around Quran courses or programs such as “Let’s visit a mosque.” In 2011, the government annulled a regulation that banned Quranic courses for children under the age of 12. Once this ban — a remnant of the “soft coup” against the Islamists on Feb. 28, 1997, according to the AKP — was removed, local branches started opening up Quran courses with enthusiasm. In many cities, the local branches cooperated with public preschools to provide religious education to the kids. By 2020, the number of children between the ages of 4-6 who benefited from these had reached half a million, according to an interview given by Ramazan Mutlu, the deputy chair of Diyanet, to the official Anatolia News Agency. According to Turkish Statistical Institute figures, the population of children aged 4-6 is 3,980,361.