The Biden administration said Syrian oil is for the people of Syria, not for the United States. 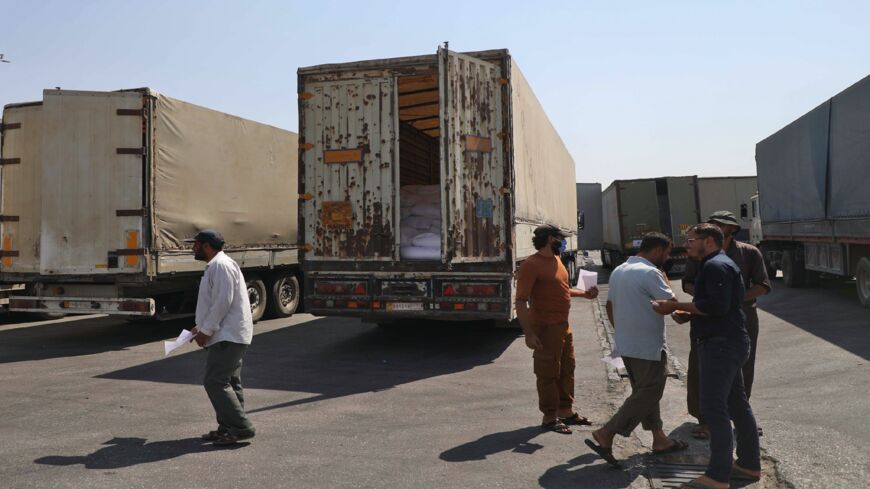 The Joe Biden administration has denied claims its decision to not renew a sanctions waiver for an American energy company that was planning to extract and market oil in Kurdish-controlled northeastern Syria is connected to efforts to get Russia to maintain cross-border humanitarian aid corridors to the war-stricken country.

The waiver for Delta Crescent Energy expired in May and was not renewed, as first reported by Al-Monitor a year after it was granted by the Donald Trump administration, which said it was keeping some US troops in northeast Syria to “keep” and “secure" the oil. The Biden administration says it is staying in northeast Syria “for the people” and “not for the oil.” Syria is under heavy sanctions by the United States, including the 2017 Countering America’s Adversaries Through Sanctions Act (CAATSA) and its related authorities, Executive Order (EO) 13894 from October 14, 2019, and the 2019 Caesar Syria Civilian Protection Act (Caesar Act) against the Assad regime and its patrons.

However, there have been claims that the underlying cause for canceling Delta Crescent Energy’s license is to appease Russia ahead of July 10, when the UN Security Council’s mandate for delivering aid via the Bab al-Hawa border crossing from Turkey to rebel-held northwestern Syria expires. Russia is threatening to wield its veto power at the Security Council to shut what is the last remaining cross-border aid channel down. This is in keeping with its demands that all humanitarian assistance be channeled via the government of Syrian President Bashar al-Assad in Damascus, whose full authority Moscow is pushing to restore.

Senior officials in the Biden administration deny the claims. They say the United States is committed to maintaining its presence in northeast Syria in order to ensure the lasting defeat of the Islamic State (IS), which is seeking to re-establish a presence after its territorial defeat by the US-led coalition and its Syrian Democratic Forces (SDF) in 2019.

“The decision not to renew the license for Delta Crescent [Energy] had nothing to do with the Russians. That decision was made weeks ago on the basis of the license application and based on the policies of the Biden administration,” said a senior administration official speaking on background to Al-Monitor. “I can assure you that we have a military presence in northeastern Syria exclusively focused on fighting [IS],” the official said. US forces are not there “for any other reason. They are not there to protect the oil. They are not there to exploit the oil resources. Syrian oil is there for the Syrian people, and we do not own, control or manage any of those resources, nor do we wish to.”

“I think the idea that the United States can trade oil fields is one of those silly blob things,” said Aaron Stein, director of research at the Foreign Policy Research Institute, a think tank in Philadelphia. The SDF currently protects the fields, and its civilian arm manages the ramshackle installations. In the event of a regime attack, however, US forces would likely step in as they did in February 2018 when pro-Assad forces and Russian mercenaries sought to seize control of oil fields in Deir ez-Zor.

As for the UN crossing, “We support expanded humanitarian access to the Syrian people, including the essential cross-border access authorized by the UN Security Council,” the official said. “We won’t talk about internal discussions, but I want to make clear that humanitarian access is not something we think should be traded for. Access to humanitarian assistance is something all Syrians need and have a right to, and that includes both cross-line (between government and opposition-held territories) and cross-border assistance. We’re going to press for as much access as we can,” the official added.

Formal negotiations for the renewal of the mandate for Bab al-Hawa, or Cilvegozu as its known in Turkish, are set to begin next week. 1,000 UN trucks deliver food, medical supplies and other humanitarian relief via Bab al-Hawa every month, covering some 85% of 4 million people in need of assistance. The likely outcome of the talks is that Russia will not wield its veto power and the current border crossing to Idlib will be maintained, as it’s in the interest of all sides that aid continues to flow.

“I think we’ll get a compromise,” Stein predicted. “Why [would the Russians] give up leverage. The UN stops working and they have to feed Syrians.”

“If they do veto, then the Biden team has a problem. I know they do not trust Russia, but in a way, they need Russia to show some good will here. Otherwise, Syria policy gets a whole lot harder and devolves back to sanctions. It becomes harder to have real, constructive dialogue with Moscow if they pull the plug,” he said.

A source familiar with the discussions said the Biden administration has made it clear to the Russians that it supports “all modalities of aid — cross-line from Damascus and cross-border.” The source added, “Washington is focused on COVID-19 relief and vaccines and in explaining to the Russians that the crossings are needed for distribution. The United States is not engaging in broader discussions with Russia over Syria at this time. Its first priority is the aid crossing.” However, “the Russians are obsessed with cross-line aid from Damascus. The United States doesn’t oppose this and supports all pathways. But cross-line aid cannot replace cross-border aid,” the source said.

In any case, Russia is almost surely not going to cede to demands that two other crossings via Iraq and Jordan be reinstated. Turkey wants another border crossing to northwest Syria via Bab al-Salaam to be reopened. All were closed in gradual succession when Russia and China vetoed extensions of their mandates at the Security Council.

“To Moscow, aid is a weapon of war.  Russia has completely subordinated humanitarian concerns to its political goals of securing its influence in Syria through the regime, driving a wedge between Turkey and its NATO allies, and pursuing a seat at the high table through generalized disruption,” said Max Hoffman, director for national security and international policy at the Center for American Progress, a think tank based in Washington, and co-author of a recent report on Syrian refugees.

“Moscow views the UN cross-border mechanism — and the deconfliction channels associated with it — as just another tool to advance these goals, strengthening Assad’s hold and bringing acute pressure on Turkey,” Hoffman told Al-Monitor in emailed comments.

“Nearly 3 million desperate Syrians in the northwest depend on cross-border assistance, so its potential end would increase the burden on Turkey — as the de facto authority in the northwest — and humanitarian INGOs, while also causing more Syrians to attempt to cross into Turkey. Russia holds this prospect — along with the threat of further military pressure on Idlib — like a sword over Turkey’s head,” Hoffman added.