Escalation with Hamas arrives exactly at the moment when the anti-Netanyahu bloc is trying to cobble up a "government for change." 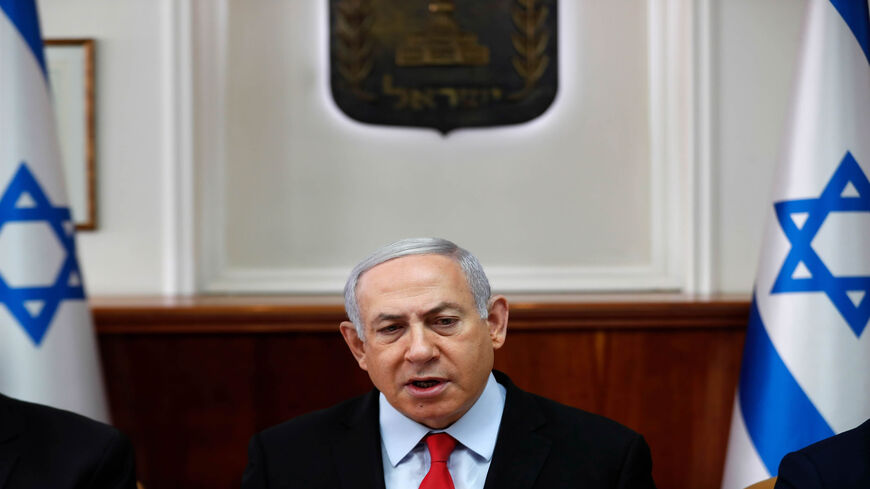 Israeli Prime Minister Benjamin Netanyahu chairs a Cabinet meeting, as an escalation of violence raged for a second day in the Gaza Strip, Jerusalem, Nov. 13, 2019. - Ronen Zvulun/POOL/AFP via Getty Images

The current round of violence that erupted May 10 between Israel and Hamas has two unusual aspects.

The first is unprecedented. For the first time ever, a relatively minor terrorist organization such as Hamas presented a major military power such as Israel with an ultimatum, demanding the withdrawal of all its security forces from two Jerusalem flashpoints — Al-Aqsa Mosque compound and Sheikh Jarrah neighborhood. Hamas even set a specific time — 6 p.m.

Israel obviously ignored the threat and went ahead with the annual Jerusalem Day celebrations. But at exactly 6 p.m., Hamas fired six rockets toward Jerusalem. One landed on the city’s outskirts, causing damage but no casualties. However, the sirens warning of the incoming rockets disrupted the annual Jewish flag parade through East Jerusalem, sending participants fleeing for shelter, while lawmakers were evacuated from the Knesset plenary where a special annual session was underway marking the Allied victory over the Nazis. The scenes, aired live, provided Hamas with dramatic victory photos, caught Israel unprepared and made a mockery of the boastful statements by senior Israeli figures in recent weeks.

The second unique aspect of this round of violence between Israel and the Gaza Strip is perhaps even more fascinating: At his toughest moments, as he battles for his political survival and personal freedom, Prime Minister Benjamin Netanyahu is getting some unexpected help from his veteran ally, the Hamas movement.

The rocket attack erupted on the day that Knesset members Naftali Bennett and Yair Lapid, heads of the Yamina and Yesh Atid parties, were preparing to tell President Reuven Rivlin that they had managed to form a new government. The six parties of the so-called bloc for change had been conducting intense negotiations in recent days, finalizing most of their coalition agreements. Only a few final gaps remained to be bridged before the bloc could achieve the almost impossible feat of replacing Netanyahu. Then, all hell broke loose, with rockets flying, Israeli planes striking Gaza targets and clashes erupting between Israeli Police and Arab citizens, mostly in mixed Jewish-Arab towns.

The developments forced Knesset member Mansour Abbas, head of the Islamist Ra’am party, to ask for timeout from the coalition negotiations he had been conducting in a bid to become the first Arab political party with a foothold in an Israeli government. Ra’am is affiliated ideologically with Hamas, and Abbas could not afford to sign coalition deals with Israel while government forces were clashing with his brothers in Gaza. Ultimately, Hamas might have offered Netanyahu his final lifeline, rewarding him for his political and security stances over the past decade. From Hamas’ point of view, Netanyahu’s positions had actually benefitted the group.

But how did events unfold? Tensions began last month in the predominantly Palestinian Sheikh Jarrah neighborhood, sparked by a prolonged legal dispute between Jews seeking to evict Palestinians from their homes, a move backed by a court ruling. The tension spread from there to the most volatile flashpoint on the face of the earth — Al-Aqsa Mosque. The bizarre police decision last month to place metal barriers near the Damascus Gate to the Old City in order to disrupt the traditional Ramadan month evening gatherings at the site, generated nightly clashes, at first in the gate area and subsequently at Al-Aqsa compound. Then came the Hamas ultimatum.

Each year on May 10, on Jerusalem Day, Israeli Jews celebrate the unification of the city after taking over its eastern part in the 1967 Six-Day War, 54 years ago. For the first time ever, an external force — Hamas — managed to disrupt the celebrations, including the flag parade that many Muslims view as an annual provocation, dominating the regional agenda and pushing the Palestinian Authority (PA) to the farthest sidelines.

Setting aside the political implications of this outbreak, Netanyahu is now reaping what he sowed since he returned to power in 2009 on a pledge to destroy Hamas. In the ensuing years, the way analysts see it, he had in practice forged an alliance with the group. By avoiding an all-out clash with the organization, he had been defending it. He had also assisted in raising money to fund it, by means of enabling foreign assistance. All this became abundantly clear in the 2014 war with Gaza, codenamed Operation Protective Edge. Netanyahu was simply not interested in bringing down Hamas, on the contrary: He wanted a strong Hamas and a weak, stuttering PA. The result is a strong, self-confident group that is now getting in his face — but may also be doing him a great service.

For all his belligerent rhetoric, Netanyahu’s record reflects caution, pragmatism and intense dislike of military adventures. In the coming days we will find out whether his desperate political and legal straits have an impact on these core traits. Paradoxically, continued clashes with Hamas undermine the prospects of a new government to replace Netanyahu. The law gives Lapid just over three weeks to form a new government, prompting speculation that the military clash with Hamas could last that long. The Israel Defense Forces (IDF) were ordered to respond harshly to the Hamas rockets on Jerusalem and the air force bombed multiple targets in the night hours between May 10 and May 11. Will Netanyahu go all the way this time, or will he revert to his usual pattern of striving for a speedy end to the fighting?

Yet another troubling aspect relates to the element of surprise. Military intelligence assessments in recent weeks argued that Hamas was not seeking an extended clash with Israel. This analysis was based largely on the character and moves of Yahya Sinwar, the Hamas “strongman” in Gaza, who has been focused on alleviating the humanitarian crisis in the enclave and shoring up his rule. Apparently, Israeli intelligence did not identify the import of the surprising threat a few days ago by Mohammed Deif, leader of the Hamas military wing who had been lying low for years.

Deif was the one who set off the threat saga against Israel last week, and his sudden appearance (in voice only) appears to have shifted the balance of power in the Gaza Strip almost overnight. Israel believes Sinwar had little choice but to go along with the military wing. Hamas is also experiencing a power struggle between its leadership outside Gaza (Khaled Meshaal and Salah al-Arouri), and in Gaza (Ismail Haniyeh and Sinwar), with the external group pushing for confrontation with Israel and displaying militancy, while Sinwar prefers calm that would allow him to improve the conditions under which the enclave’s residents live.

In 2014, on the eve of Operation Protective Edge, Military Intelligence assessed that Hamas was not seeking confrontation. Then, the fighting lasted 51 days. This time, everyone — possibly with the exception of Netanyahu — is hoping it will be shorter.

by Murielle KASPRZAK and Joseph SCHMID | AFP | May 26, 2022
END_OF_DOCUMENT_TOKEN_TO_BE_REPLACED