Iraqi Prime Minister Mustafa al-Kadhimi applauded Pope Francis' visit as a great success and reached out to the Iraqi people and different parties to form a dialogue of understanding and tolerance among them. 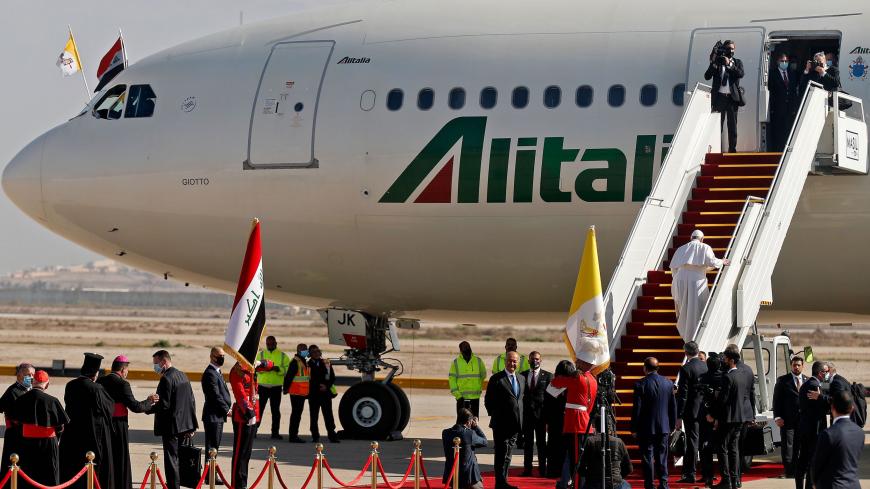 Pope Francis climbs the stairs to board his Alitalia Airbus A330 aircraft as he departs from the Iraqi capital's Baghdad International Airport on March 8, 2021. - AHMAD AL-RUBAYE/AFP via Getty Images

BAGHDAD, Iraq — After Pope Francis returned from his first international trip since the coronavirus pandemic began, where he visited different ethnicities and religious groups in Iraq, he tweeted, “Iraq will always remain in my heart.” He asked the Iraqi people “to work together, united for a future of peace and prosperity that leaves no one behind and discriminates against no one.”

US President Joe Biden issued a statement on the pope's visit, saying, “I congratulate the government and people of Iraq for the care and planning that went into organizing this monumental visit, and continue to admire Pope Francis for his commitment to promoting religious tolerance.”

Iraqi Prime Minister Mustafa al-Kadhimi used this occasion to deliver a message to the nation. He asked all Iraqi parties and groups to use this opportunity for unity, peace and cooperation.

“Iraq has a real opportunity to restore its historic role in the region and in the world,” Kadhimi said March 9, calling the pope’s visit a historic milestone for Iraq.

The papal visit was very beneficial in terms of returning Iraq to the international spotlight and unveiling its rich culture and ancient history to the world.

Iraqis, regardless of their ethnicity and religion, responded well to the visit. Even the militias with anti-Western rhetoric and propaganda did not lose the opportunity to use the pope’s visit to their advantage by proclaiming themselves to be the defenders of Christians in the face of the Islamic State.

“The pope's message has reached all over the world, while he is wandering with a heart full of hope in the beloved cities of Iraq. Our people's message reached all the peoples of the earth,” Kadhimi said.

By visiting Ayatollah Ali al-Sistani, the pope not only connected and created a link between Shiites and Christians but also brought the Sunnis to the table. In an interview with iNews, prominent Sunni cleric Amer al-Bayati said on live television, “Sistani is the pyramid (umbrella) of all Muslims in Iraq and our spiritual father figure; therefore, the pope visited Sistani as if he visited all Muslims.”

In line with the pope’s visit, Kadhimi asked rival parties and groups to put their differences behind them and invest in the opportunity to work together toward a stable and prosperous Iraq.

“We call … all the different political forces, popular and youth protesters, and opponents of the government to the table of responsible dialogue in front of our people and history,” Kadhimi said. “We call on our forces and political parties to give priority to the interests of the country.”

Kadhimi had already opened a dialogue with the protestors, leading to emptying the streets peacefully and voluntarily.

He asked all parties to work “for the success of the early elections” and give people “the opportunity for hope and confidence in the state and in the democratic system.”

He addressed the government opposition, including the militias in particular, saying, “My dear opponents, I invite you, in all sincerity, to an open and frank dialogue with the government on the basis of the country's interests, security and sovereignty, and on the basis of preserving the security of Iraq, supporting the state and the rule of law.”

Also, in an attempt to raise attention for a permanent solution to the long-disputed Kurdistan issue, Kadhimi demanded “a genuine, deep national dialogue at all official, party and popular levels, to reach the framework for a final agreement on the relationship between the central government and the Kurdistan Region.”

Kadhimi has actively used diplomacy in the office to bring all disputed parties to the table and negotiate a deal that benefits everyone. Now on the international level, he asked Iraq’s neighboring countries to do the same and play a positive role in the reconstruction and future of Iraq. He also initiated a strategic dialogue with the international coalition to create “the environment and timeline for the removal of all combat troops from Iraq soil, within the framework of agreed-upon technical and timing mechanisms, while preserving the best relations with the coalition countries.” He reaffirmed Iraq’s sovereignty and refused to let it “be a field for external conflicts.”

Kadhimi also mentioned the importance of restoring Iraq’s external relations and its regional and international role as a peacekeeper, and he encouraged the international community to invest in and support Iraq’s economic reform project to turn it into the economic powerhouse it once was in the region.

At the end of his speech, Kadhimi — on behalf of Iraq — thanked Pope Francis for his prayers and for making the effort to visit Iraq during the pandemic and with all of Iraq's security risks posed by the militias. He also thanked the people and all who contributed to organizing the pontiff’s Iraq visit.