The statement appeared as a correction of comments by Iran’s intelligence minister, which have fueled worries that Tehran could be developing nuclear arms. 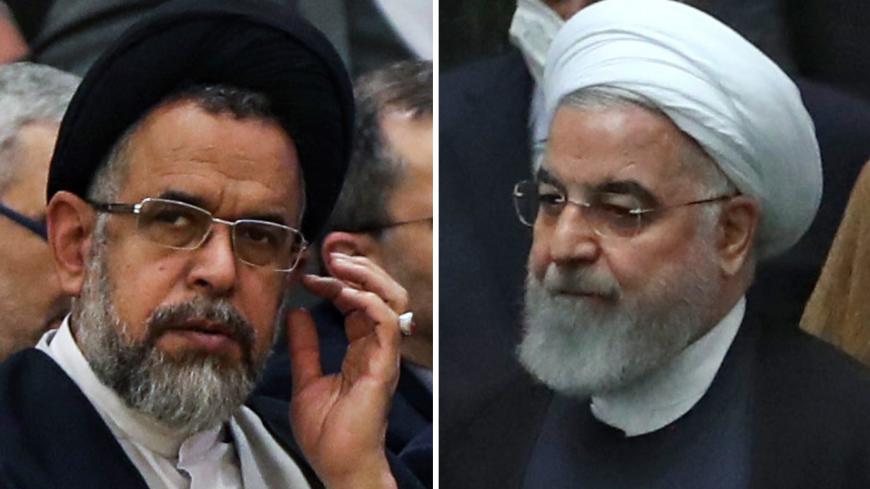 Intelligence Minister Mahmoud Alavi (L) attends a conference on terrorism and regional cooperation in the Iranian capital, Tehran, on Dec. 8, 2018. Iranian President Hassan Rouhani (R) arrives for the inaugural session of the new parliament in Tehran on May 27, 2020. - AFP via Getty Images

Iranian President Hassan Rouhani said the Islamic Republic is not after nuclear weapons. “We have taken this stance over and over again since 1991,” he said in a televised address to his Cabinet on Wednesday.

The comments seemed to serve as a correction to a controversial interview last week by Intelligence Minister Mahmoud Alavi. The minister had suggested that Iran may seek nuclear bombs, warning that if the West continues to “corner” the Islamic Republic with sanctions, Iran may have no choice but to act differently on its nuclear program. “[Then] it’s no longer Iran’s fault,” Alavi told state television.

But during the Cabinet meeting, where Alavi was also present, Rouhani said Tehran remains committed to a fatwa, or religious decree, issued by Supreme Leader Ayatollah Ali Khamenei that places an absolute ban on the pursuit and production of nuclear weapons. “We do not want any secret nuclear weapons program,” Rouhani added, “Yet we have sought and will continue to seek nuclear technology, which is our right.”

Before the signing of the Iran nuclear deal in 2015, Tehran was locking horns with world powers over its nuclear activities, which were seen as a suspicious program. The accord largely allayed those fears. Iran promised more transparency and gave in to restrictions on its program in exchange for a removal of sanctions, which had come as punitive measures for its contentious nuclear activities. The nuclear deal, however, has been in tatters since the 2018 US pullout and reinstatement of some of anti-Iran sanctions, which the Rouhani government is hoping to get rid of through negotiations with the administration of President Joe Biden.

Hard-liners in Iran, including the conservative-majority parliament, have been attempting to complicate rapprochement with the new US government by passing a law that requires the Iranian government to significantly roll back its cooperation with the International Atomic Energy Agency (IAEA) if sanctions are not lifted by a Feb. 21 deadline. Such measures as well as the resumption of 20%-level nuclear enrichment have rehashed fears about a new cycle of tensions that may arise from nuclear secrecy in Iran.

Yet in his speech, Rouhani attempted to address the fresh concerns, stressing that Iran has no intention of expelling IAEA inspectors. It remained unclear, nonetheless, if the Rouhani government will still be able to resist pressure from hard-liners and could continue to fully adhere to the Additional Protocol, under which Iran has accepted various forms of voluntary cooperation, including allowing snap inspections at its nuclear sites.