The latest meeting appears to be a signal to the new US administration that the Middle East Quartet and the Palestinians are serious about talks based on a multilateral approach. 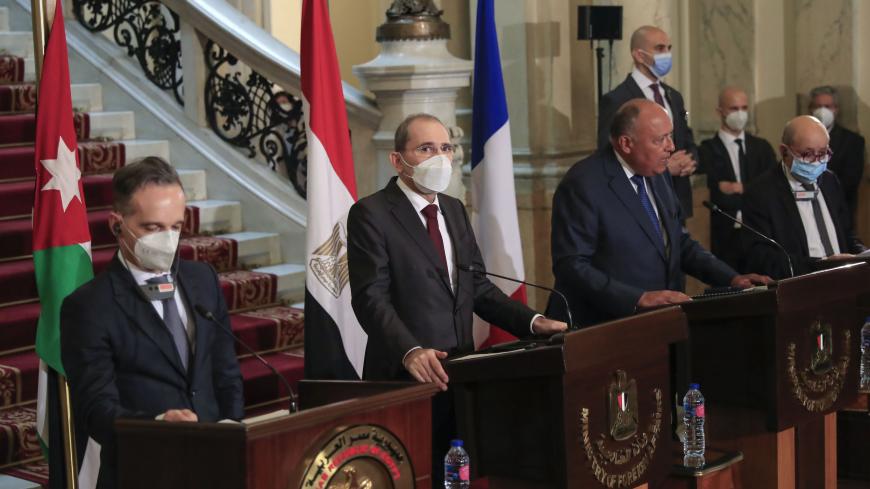 Political pundits were initially taken aback by the meeting of the Middle East Quartet — made up of the United States, the United Nations, the European Union and Russia — in Cairo on Monday. After all, the incoming US president has yet to be inaugurated, Israel is holding general elections in March that might see the downfall of Prime Minister Benjamin Netanyahu, and even the Palestinians are poised to have their own elections.

But the meeting in Cairo should be seen as directly tied to these potential leadership changes. The quartet appears to be trying to prepare itself for the post-Donald Trump era, which is expected to see a number of regional changes.

Wadie Abunassar, director of the Haifa-based International Center for Consultations, told Al-Monitor the talks in Cairo are not consequential in and of themselves. He noted, however, that "the meeting might be important as a sounding board for what will happen in the coming years.”

Riyad Mansour, head of the Palestinian delegation to the UN, told Al-Monitor there is hope that the changes that took place in the United States lead us to believe that our idea of a collective approach to world problems can be used in the Palestine context. “Our policy is to have a collective approach in dealing with the Israeli Palestinian conflict. This was reflected in the speech and statements of President [Mahmoud] Abbas at the UN last October.”

Mansour said the Palestinian leader urged the UN secretary-general to prepare for an international peace conference. “The quartet is the first step to return to the collective approach. We don’t want the sole American role in the peace process, which has been disastrous in recent years.” Mansour noted that continuing on the same path that has not brought results would be an exercise in futility. He welcomed the need to expand the quartet. “If the nucleus of the international community is the quartet, we would like to talk about the quartet plus,” he said. Mansour added that the pluses could be Egypt and Jordan in the first instance and anyone else that can make a contribution in the next instance. He said when talks in Annapolis were set, few countries had signed on to join. But within a short period everyone wanted to attend. Fifty countries ended up participating in the peace talks at Annapolis, he said.

The Palestinian UN diplomat said the signals coming from US President-elect Joe Biden's camp have been positive. “I can tell you that the signals from the Biden administration during the election process and since have been positive. They have talked about multilateralism and the return for the role of the UN. All these signs of a collective approach in dealing with global issues are welcomed. Just like they are dealing with climate change in a multilateral approach, they need to also deal with the Palestinian-Israeli issue in the same spirit.”

The results of the November US elections have already forced the move of the various political chess pieces. Already even before the quartet meeting took place, Turkey’s president appears to have started his post-Trump plans by trying to improve relations with Israel and some of the Arab states. Turkey sent an ambassador to Tel Aviv In December after an absence of two years, and the Turkish government appears to be extending an olive branch in the way of Egypt and the Gulf states.

Saudi Arabia, expecting a Biden administration rapprochement with Iran, suddenly decided to end the Gulf dispute that witnessed a three-year air and land siege on their tiny Gulf neighbor. The siege was lifted, and the leaders made up with hugs (despite the COVID-19 pandemic) between Saudi Crown Prince Mohammad bin Salman and Qatari Emir Tamim Bin Hamad Al Thani, as well as a personal ride chauffeured by Salman in the historic Saudi town of al-Ula.

The Palestinian split also witnessed sudden movement as the head of the Hamas politburo agreed in writing to the demands of Abbas and the PLO, paving the way for legislative elections to be followed by a national unity government and then presidential elections — all within the coming six months.

Egypt and Qatar, who have been bitter enemies, appear to also be reconciling as Trump’s so-called "favorite dictator" is expecting a less-friendly president in Washington and realizes he needs to mend relations with both Qatar and Turkey both for economic and political reasons.

The quartet had last met in Amman in September; at the time, concern over annexation was high on the agenda. For now, Egypt is telegraphing that the current goal is more directly related to the push for the two-state solution. “The participants will urge the Palestinian and Israeli sides to resume negotiation in order to reach a just and comprehensive political settlement based on the two-state solution,” stated the English-language Egyptian press The Daily News.

The quartet talks taking place in Cairo with the presence of Jordan and Egypt appear to be sending a clear signal to the Biden administration of their willingness and that of the Palestinians for serious talks based on a multilateral approach and not on the singular Trump vision.