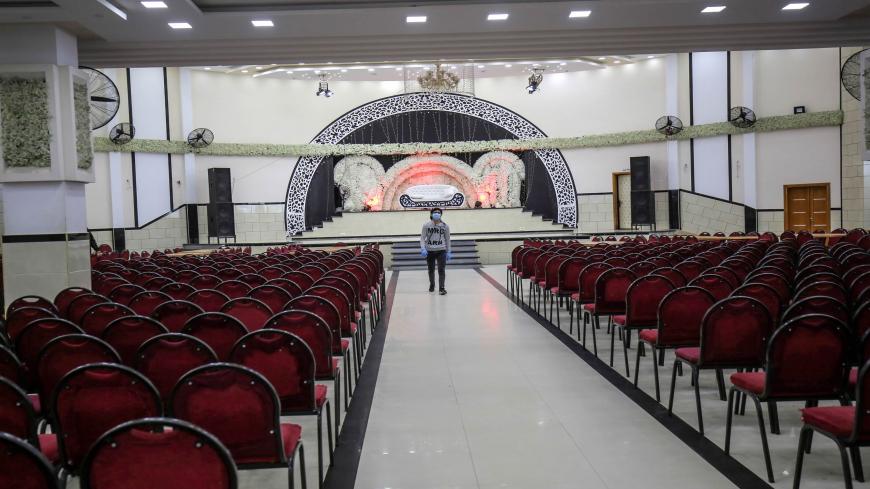 A Palestinian man wearing a protective face mask as a preventive measure against the coronavirus walks inside a closed wedding venue in Rafah, Gaza Strip, March 22, 2020. - Said Khatib/AFP via Getty Images

GAZA CITY, Gaza Strip — New Year’s Eve was different this year in the Gaza Strip. Instead of hosting parties and organizing celebrations, hotels hosted individuals kept in quarantine as a precaution amid the coronavirus pandemic.

Since March, and as part of the strict measures taken to combat the virus that causes COVID-19, the Ministry of Interior in the Gaza Strip has transformed Gaza hotels into quarantine centers for those returning to Gaza. This prevented hoteliers from hosting New Year's Eve events.

By the end of 2020, the total number of coronavirus deaths in the Gaza Strip amounted to 371, with more than 4,000 positive cases, including 164 seriously ill patients.

Moein Nashwan, director of the Beach Hotel, told Al-Monitor, “The coronavirus pandemic has literally drained us, and we were unfortunately unable to host any New Year's Eve celebrations.”

The Beach Hotel with its 25 rooms is among 10 large hotels the Ministry of Interior in Gaza has converted into quarantine centers.

Nashwan said that he was forced to terminate work contracts with local and foreign institutions and call off several weddings and evening events due to the health crisis. He also had to lay off and terminate contracts signed with more than 30 workers during 2020, as the ministry did not cover any expenses for turning the hotels into quarantine centers, nor did it offer compensation for hotel owners.

He noted that the hotel operated for only two months last year before the first case was reported in the Gaza Strip in March and was subsequently converted into a quarantine center.

Nashwan pointed out that in 2020, the hotel’s losses amounted to about $250,000, adding, “Things are not likely to improve as hotels are expected to remain closed.”

During a special ceremony organized July 27, Hamas honored hoteliers in the Gaza Strip for their role in confronting the COVID-19 pandemic.

In 2020, the number of individuals quarantined in Gaza hotels reached 7,473, according to figures Al-Monitor obtained from the Ministry of Social Development in Gaza.

Haitham Handuka, director of the Gloria and La Rosa hotels on the Gaza beachfront, which were both turned into quarantine centers, described 2020 as “a very exceptional year” during which the hotels were only open for one month.

Handuka employs 45 workers in both hotels, and they were all laid off due to the absence of any bookings. “We had no income in 2020,” he told Al-Monitor.

Handuka said that his losses for the past year amounted to $350,000 and that he did not expect things to improve in the new year.

Khaled al-Lulu, an employee who used to work for Al-Mathaf Hotel in Gaza City, lamented that he had to leave his job at the hotel and move to another sector after the hotel turned into a quarantine center.

He told Al-Monitor that they did not host any New Year's Eve celebrations because of the pandemic.

There are 17 hotels operating in the Gaza Strip that have a license from the Ministry of Tourism, and most of them are four-star hotels according to the international hotel classification.

According to Zakaria al-Hor, director of the General Administration of Tourism at the Ministry of Tourism and Antiquities in Gaza, all of these hotels have suffered great losses due to the coronavirus pandemic and the harsh economic conditions plaguing the Gaza Strip.

Hor told Al-Monitor that the hotel occupancy rate did not exceed 5% in 2020, and that his ministry is preparing a plan to address the difficult conditions that hotels are going through by stimulating domestic tourism “so that this sector does not collapse.”

The deputy chairman of the Board of Directors of the Palestinian Committee for Restaurants, Hotels and Tourism Services, Eman Awad, told Al-Monitor, “Hotels in the Gaza Strip and the West Bank have responded to the state of emergency and have come under the command of the executive authority.”

She said that the losses incurred by hotels in Gaza exceeded $100 million — “and we are still counting.” Awad explained that the committee called on the Palestinian government in Ramallah to provide aid and grants for hotels and restaurants in order for those affected to not go bankrupt.

Awad added that the committee resorted to the European Union in October and requested grants or low interest loans to hoteliers after Gaza hotels started being used as quarantine centers.

She said that based on the EU request in December, the committee is set to discuss the details of the matter with the EU this week.