In an exclusive interview with Al-Monitor, KRG Prime Minister Masrour Barzani’s deputy chief of staff outlined why the Kurdish region's government wants US forces stationed in and around the Fish Khabur border crossing. 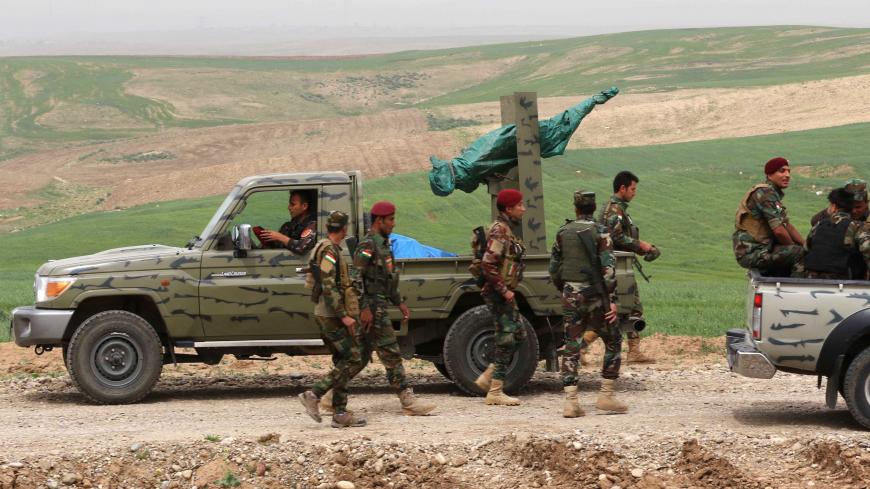 Syrian Kurdish Peshmerga fighters and members of the Rojava Forces Defense Units walk near the town of Fish Khabur, which lies in Iraq's Kurdish autonomous region near the three-way border crossing between Iraq, Syria and Turkey on March 29, 2018. - SAFIN HAMED/AFP via Getty Images

The Kurdistan Regional Government of Iraq has formally asked the US-led coalition to deploy observers to patrol its border with the Kurdish-controlled northeast of Syria, where a US-backed Kurdish militia and its various affiliates have governed since 2012, Al-Monitor has learned.

Masrour Barzani, the prime minister of the Kurdistan Regional Government (KRG), made the request to Secretary of State Mike Pompeo in a telephone call Tuesday at noon EST, Iraqi Kurdish officials told Al-Monitor. The officials declined to comment on Pompeo's reaction. The exchange with Pompeo follows a formal request relayed during Barzani's Dec. 21 meeting with the commanding general of the Special Operations Joint Task-Force-Operation Inherent Resolve, Brig. Gen. Guillaume Beaurpere.

The US Consul General to Erbil Rob Waller was present at the meeting to discuss coordination between the KRG’s Peshmerga forces and the US-led coalition.

In an exclusive interview with Al-Monitor, Barzani’s deputy chief of staff Aziz Ahmad outlined why the KRG wants US forces stationed in and around the Fish Khabur border crossing, which is the key supply hub for coalition forces stationed in northeast Syria.

Ahmad said the patrols would serve several purposes, including independently verifying any smuggling operations along the border, which “would be good” for the KRG and its main regional ally, Turkey. The monitors, Ahmad contended, would discourage the outlawed Kurdistan Workers Party (PKK) from moving men and supplies from its bases in northern Iraq to Syrian Kurdistan, or Rojava, and that would be “good for everyone.” The US presence as “honest brokers,” he added, would hold the PKK-mentored and US-backed Syrian Kurdish People’s Protection Units accountable to “severing ties with the PKK.”

The State Department and the US Central Command did not respond to Al-Monitor’s request for comment.

A senior official from the Syrian Democratic Forces (SDF), the United States’ top ally in the fight against the Islamic State, said the SDF command was unaware of Barzani’s proposal. “No such proposal or conversation [has] taken place with the coalition or the KRG to date, but we would welcome this conversation,” the official, speaking not for attribution, told Al-Monitor.

The KRG call follows last week’s skirmish south of Fish Khabur between KRG forces and PKK and YPG fighters, who exchanged fire across the Khabur River, which demarcates the border. The clash left several wounded on both sides. Barzani issued an angry statement calling on the coalition to prevent the YPG from further “acts of aggression.”

The YPG denied that it had carried out an attack against Peshmerga forces. The group said in a Dec. 18 statement, "We, as the People’s Defense Units, respect autonomy of the Kurdistan Region of Iraq and call on the Kurdistan Regional Government to abandon their aggressive and provocative stance and rhetoric towards [the Kurdish autonomous administration in Syria]. All issues must be resolved through dialogue between the two sides."

The US administration does not want to be drawn into the intra-Kurdish spat and has pointedly ignored Barzani’s demands to rebuke the SDF and the YPG. The KRG is a critical and longstanding US ally in the region. The deployment of coalition forces would serve the United States’ Kurdish allies on both sides of the border.

The idea was first floated to the Americans by Iraqi Kurdish officials in October 2019, when Turkish forces invaded northeastern Syria, seizing large chunks of Kurdish-controlled territory. KRG officials worried that Turkish forces would fan out to the Iraqi border and move into the Iraqi side of the border, effectively cutting access between the two sides as it’s long threatened to do. Locking coalition troops into the Fish Khabur area would help keep the Turks out. Syrian regime forces and their Russian and Iranian allies as well as Tehran-backed Shiite Iraqi militias would be similarly held at bay.

KRG officials insist that the coalition would not require Baghdad’s authorization to deploy its forces around Fish Khabur.

A well-placed Iraqi Kurdish source who asked not to be identified by name said, “We should be having this conversation directly with the [SDF commander] Mazlum [Kobane]," complaining, “We are all Kurds, why are we speaking to each other through the Americans?”

SDF sources retort that their efforts to develop ties with Barzani after he ascended to the KRG premiership in June 2019 have been consistently rebuffed. The lack of communication seems to be at the root of last week’s firefight.

The confrontation erupted at around 4 a.m. local time on Dec. 16, when six armed men sought to cross the river to the Iraqi side aboard a boat and were then ambushed by the Peshmerga.

There are conflicting accounts of what ensued. Sarbast Lazgeen, the deputy minister for Peshmerga affairs, claimed that a group of 60 or so had opened fire on the Peshmerga forces in support of the YPG and PKK militants who were apprehended, though Iraqi Kurdish officials conceded privately that the figure was exaggerated.

Kobane was involved in negotiations to defuse tensions early on. But they escalated when the Peshmerga sought to disarm the men before letting them proceed to their destination after having initially agreed to allow them to keep their weapons, well-placed sources with close knowledge of the affair told Al-Monitor. According to one version of the affair, at that point, YPG forces from across the river and the peshmerga began shooting at each other. One peshmerga was wounded. Two YPG fighters were badly injured as well.

The men were all eventually set free and handed over to a Syrian Kurdish delegation led by Shahoz Hassan, the co-chair of the Democratic Unity Party, the dominant force in the autonomous administration, and taken back home.

It’s unclear from the excerpts which of the men were attached to the PKK and the YPG. Turkey continues to attack both groups in Syria and in Iraq on the grounds that they are all “terrorists.” The PKK is on the United States’ and the European Union's list of designated terrorist organizations. The YPG, to Turkey’s ire, is not.

According to excerpts of their interrogation by KRG officials shared with Al-Monitor, Amed Hassan Mohammad, a Turkish Kurd cadre responsible for the group, said they were trying to get to Gare Mountain in Iraqi Kurdistan’s Dahuk region where the PKK is known to have bases.

Another of the men, a Kurd from Aleppo, said they had been instructed by “comrades” to leave northeast Syria because their work against the Islamic State “was done” and “to return to the mountains.” This chimes with the SDF’s pledge to reduce the number of PKK cadres in northeast Syria, part of a Washington-led effort to address Turkey’s security concerns.

An informal channel through which the SDF provided advance information to the KRG about the movement of militants had functioned until around a month ago. But the channel was blocked by the Iraqi Kurds after a series of deadly clashes with the PKK within Iraqi Kurdistan.

The YPG alluded to the channel in its statement: “In recent years, there has been ongoing efforts of coordination between Autonomous Administration of North and East of Syria and the Kurdistan Region. These continuous efforts were as part of the joint fight against [IS] and to ensure peace and security in the region. As a result of this coordination, many tensions on the border were resolved peacefully.”

The group that was intercepted by the Peshmergas went in unannounced.

Tensions between Barzani’s Kurdistan Democratic Party (KDP) and the radically leftist PKK, seen as troublesome interlopers, have been steadily escalating. Turkey’s repeated military interventions across Iraqi Kurdistan have played a major role. Turkish airstrikes and ground operations are pushing the PKK outside of their traditional stomping grounds along Iran and Iraq’s mountainous borders with Turkey and deeper and deeper into KDP-held territory. Thousands of civilians caught in the crossfire have had to evacuate their villages, while dozens of others have died in Turkish drone attacks, adding pressure on the KRG administration amid growing public fury over corruption and economic mismanagement.

At the same time, the PKK is being squeezed to leave Rojava just as it's getting clobbered in Turkey and Iraqi Kurdistan and the SDF is under attack from Turkey and its Sunni rebel allies in Ain Issa.

Unless Turkey restarts peace talks with the rebels that collapsed amid mutual recriminations in 2015, this bloody game of whack-a-mole will drag on, leaving the SDF and the KDP sandwiched in the middle and Washington struggling to find common ground between all three. Turkish President Recep Tayyip Erdogan’s alliance with the hard-line Turkish nationalist Devlet Bahceli offers little hope. If anything, repression of Kurdish activists in Turkey is growing harsher by the day. Bahceli is now agitating to ban the Kurdish-friendly Peoples’ Democratic Party, the third largest in the parliament.

The deployment of coalition forces along the Iraqi-Syrian border could go some way toward mitigating the fallout and thawing tensions between the Kurds themselves — that, anyway, appears to be Barzani’s calculation. Washington’s position on the matter remains unknown.

Dan Wilkofsky contributed to this report.