Officials from Egypt, Jordan and Palestine are meeting in intense efforts to end the stalemate over the Israeli-Palestinian negotiations. 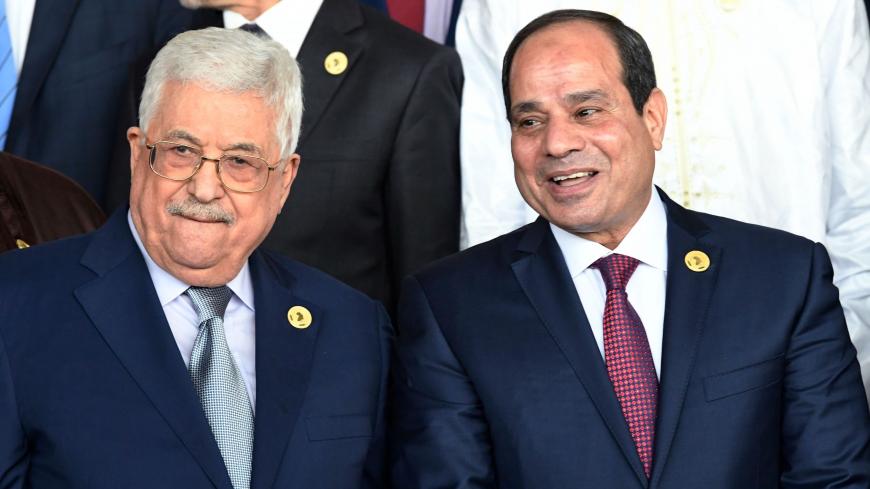 Egyptian President Abdel Fattah al-Sisi (R) speaks with with Palestinian President Mahmoud Abbas as they pose for a family a photo at the opening of the Ordinary Session of the Assembly of Heads of State and Government during the 30th annual African Union summit in Addis Ababa on Jan. 28, 2018. - SIMON MAINA/AFP via Getty Images

CAIRO — Egyptian President Abdel Fattah al-Sisi and his Palestinian counterpart Mahmoud Abbas met Nov. 30 in Cairo, where they agreed on the need for Israeli-Palestinian negotiations to resume.  They also agreed to hold an international peace conference next year bringing together Israel, Palestine and other international parties as well as to advance the Palestinian reconciliation process sponsored by Cairo. Hamas’ political bureau welcomed the announcement.

Israel's Maariv newspaper reported Nov. 30 that Israeli Prime Minister Benjamin Netanyahu will visit Cairo in the coming weeks to meet with Sisi, but a date has not yet been set. According to the paper, officials from the two countries are working to arrange Netanyahu’s visit to Cairo.

Fatah deputy chief Mahmoud al-Aloul said in a press statement Dec. 1 that a joint Jordanian-Egyptian-Palestinian committee will be formed to hold an international peace conference in early 2021, based on President Mahmoud Abbas’ proposal, which he discussed during his meeting with Sisi and the Jordanian king who agreed to it. Abbas met King Abdullah in Amman on Nov. 29 ahead of his visit to Cairo.

Abbas also communicated his vision for an international peace conference to the UN secretary general and the Arab League. According to a statement by Arab League Assistant Secretary General Hussam Zaki on the sidelines of a meeting between Arab League Secretary General Ahmed Aboul Gheit and Abbas in Cairo on Nov. 30, Aboul Gheit expressed his support for the Palestinian cause and welcomed the Palestinian president’s proposal for a peace conference.

Abdul Menhem Said, former director of Al-Ahram Center for Political and Strategic Studies, said that Egypt will never abandon its role in supporting the Palestinian cause and the peace process, stressing that its efforts to achieve national reconciliation among the Palestinian factions continue to be a foreign policy priority. Egypt’s national security depends on maintaining stability in the wider Middle East and deterring the tension and conflict that give rise to extremist organizations, he added.

Said told Al-Monitor that the EastMed Gas Forum, a regional organization based in Cairo, placed Palestine and Israel on equal footing as members alongside Jordan, Cyprus, Greece and Italy.

He added that he doesn't think that the new US administration under President-elect Joe Biden will prioritize the peace process, but there is a pressing regional need to take action on the current status quo and return to peace negotiations through Egyptian, Saudi and Jordanian brokerage, and to convince the United States to play a role in sponsoring peace in the region and pressuring Israel into compliance and into halting settlements.

Said praised the PA’s Nov. 17 decision to restore security coordination with Israel and rebuild ties with the new US administration after months of boycott over President Donald Trump’s peace plan. He also lauded the restoration of ties with Bahrain and the United Arab Emirates after tensions flared when the latter signed normalization agreements with Israel in September. Said said that those developments will make the climate suitable for restoring peace negotiations and encourage the parties to engage in diplomacy.

Salah Abdullah is a leader of the Arab Popular Conference, which supports Arab nationalism and the Palestinian cause. He told Al-Monitor that Egypt is spearheading Arab efforts to convince the incoming US administration of the importance of reviving peace negotiations for stability in the region. Egypt is also promoting reconciliation among the different Palestinian factions so they can negotiate as a united front.

He noted that Netanyahu’s upcoming visit to Cairo is also intended to coordinate stances with Egypt and prepare to interact with the new US administration, which will follow an approach different from Trump's to the Palestinian cause.

In a joint statement issued on the sidelines of the Egyptian-Saudi Political Consultation Committee meeting in Riyadh on Dec. 2, Egypt and Saudi Arabia stressed their resolve to resume the peace process. They underlined the importance of the Palestinian cause as central for the Arab nation and the need to reach a fair and comprehensive solution establishing an independent Palestinian state with east Jerusalem as its capital.

Abdullah added that Biden believes that Israel’s security lies in establishing a united Palestinian entity, unlike his predecessor. A united Arab front against Israel would help reignite the stalled peace negotiations in the Middle East, Abdullah said.

Zayd al-Ayoubi, head of the Arab Center for Strategic Affairs, said that Sisi’s meeting with Abbas in Cairo was important at this critical phase for the Palestinian cause amid Israel's continuing settlement activities in the West Bank and Jerusalem.

Ayoubi told Al-Monitor that Egypt’s pivotal role and status in the region have made it a major mediator between Palestine and Israel in the Middle East after the stagnation under Trump, who sided with the Israelis against the Palestinians. Egypt also has an impact on Israel and is able to place some pressure on it, as it managed to convince Israel to ease some of its restrictions on Gaza.

Ayoubi further said that Palestinians respect and appreciate Egypt’s role in defending the Palestinian cause and other Arab issues. Cairo’s role and efforts to achieve Palestinian reconciliation are equally vital, he concluded.