The crisis has intensified between the makers of "Saheb Al Maqam," an Egyptian film first made available on digital platforms, and the Chamber of Cinema Industry, which has blocked it from being screened in movie theaters. 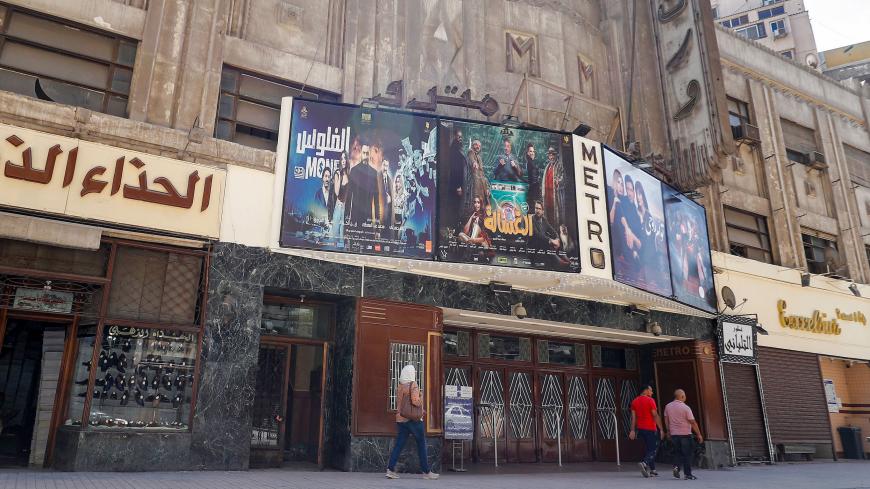 This picture taken on Aug. 26, 2020, shows a view of the historic Metro cinema theatre along the commercial Talaat Harb Street in the city center of Egypt's capital Cairo. - KHALED DESOUKI/AFP via Getty Images

CAIRO — The Egyptian Cinema Industry Chamber is at war with digital broadcasting platforms.

In a Dec. 21 statement, Hisham Abdel Khaleq, a producer and vice president of the group, said that the chamber will not allow movie theaters show films after they are available on streaming services such as Netflix and Shahid.net, warning that allowing theaters to become a "second-tier medium" would lead to the destruction of the film industry in Egypt.

Abdel Khaleq’s statement came in response to Egyptian actress Yousra, one of four Egyptians who participated in the jury of the 92nd Academy Awards, telling the press Dec. 20 that many films around the world have recently premiered on streaming services before they are shown in movie theaters.

She stressed that showing these films on streaming services has not prevented them from being nominated for international awards and competitions because they are “primarily cinematic films, and premiering on digital platforms does not mean they are not cinematic films that should be shown in theaters.”

Yousra’s statements were themselves a response to the Cinema Industry Chamber’s Dec. 10 banning of the movie "Saheb Al Maqam" from being shown in theaters because it was first streamed in July on Shahid.net, owned by the Saudi MBC Group, making it the first Egyptian movie to premiere on a digital platform before its theater release.

The decision angered the makers of the film, in which Yousra co-starred, and producer Mohamed al-Sobky and director Mohamed al-Adl expressed their ire in press statements and posts on social media.

Adl told Al-Monitor that the Cinema Industry Chamber had banned "Saheb Al Maqam" from being shown in theaters or festivals or even being considered for an Academy Award.

He added that the chamber made the decisions under the logic that showing the film in theaters or festivals or submitting it to competitions would encourage more producers to turn to streaming services and dispense with movie theaters, “which the chamber believes would result in losses for movie theaters and cause the collapse of the film industry in general.”

“Banning the film in movie theaters would keep it out of many competitions that require it to be shown publicly in theaters, and thus the chamber has deprived us of our right to literary and public appreciation, despite critics praising the film as the best in 2020 and our actors winning many awards in polls,” Adl noted.

Actor Mahmoud Abdel-Moghni recently won an award for best actor for his role in "Saheb Al Maqam" in the Dear Guest Festival 2020, which is organized by a magazine bearing the same name and reporting news about Egyptian art, culture and society.

Adl added, “The chamber did not take into account the exceptional circumstances we are working under amid the pandemic, and the closure of movie theaters as a precaution was the reason why the film was shown on a streaming service first. We hoped the chamber would support filmmakers in these troubled times instead of fighting their work.”

Lawyer and talent agent Ashraf Abdel Wahab told Al-Monitor that the laws regulating the film industry in Egypt do not allow the chamber to ban films in theaters and that the only party authorized to do so is the Censorship of Artistic Works, affiliated with the Ministry of Culture. "Saheb Al Maqam" had secured the necessary legal papers from the censorship body.

Nor does Egyptian law regulating the censorship of cinematic tapes, sound recordings, plays and advertisements specify any role for the Cinema Industry Chamber in permitting or prohibiting the public screening of films.

However, Abdel Wahab noted that the chamber's management, as an association that represents filmmakers and the owners of theaters, can impose internal penalties on theaters that violate its decisions, such as denying membership. The chamber will thus not withdraw its decision unless the owners of the theaters agree to reject the decision unanimously or by a majority, at least, he explained.

“Consequently, it will be difficult for the chamber to punish all or most of the owners of theaters, and I think that many owners will reject the decision because it will prevent them from showing some films that viewers want to see and hurt their ticket sales and thus their profits,” Abdel Wahab added.

M.M., a director of a prominent movie theater who preferred to withhold his full name, told Al-Monitor that he respects the decision of the chamber despite theater owners' anger.

“Most of the movie theaters are owned by film distribution companies, which may lose out if many movies are premiered on streaming services, because digital platforms make direct agreements with the producers without the mediation of distributors,” he explained.

He added, “However, a few cinemas are owned by malls and small businesses, who are expected to disagree with this decision because they may sell tickets to the movies that were premiered on streaming services, as some people still prefer traditional movie theaters to modern platforms. The small businesses and malls are not distribution companies, so they have no disputes with digital platforms.”

Meanwhile, Sobky, the producer of "Saheb Al Maqam," told Al-Monitor that the film was supposed to premiere in theaters, but since they are closed amid the pandemic, he had to negotiate with Shahid.net. He said he hoped that the Cinema Industry Chamber would understand the situation and grant exceptions to filmmakers to show their films in theaters in conjunction with showing them on streaming services.

“Even if theaters are opening, the demand is no longer the same as it was before the pandemic,” Shobky noted.

The Egyptian government closed movie theaters in March as a precaution against COVID-19, and on June 27, theaters reopened at only 25% capacity.

An Egyptian critic told Al-Monitor on condition of anonymity that it is unlikely the chamber will make an exception to show films on digital platforms and in theaters at the same time during the pandemic. He also found it unlikely that theaters will defy the chamber’s decision.

“Most of the theaters are owned by producers who are in charge of the Cinema Industry Chamber, and they see the screening of films and their success on streaming services as a threat both in the short and in the long term,” he explained.