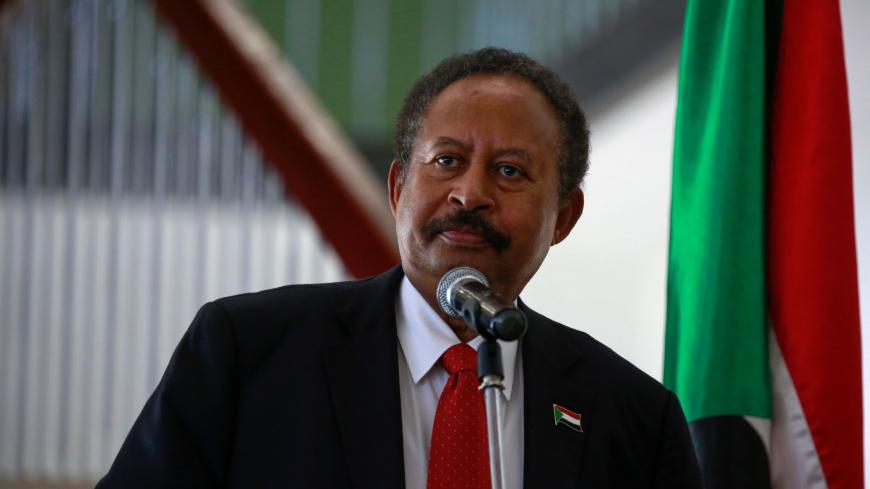 Sudanese Prime Minister Abdalla Hamdok addresses the press after meeting with his Egyptian counterpart (unseen) in Sudan's capital, Khartoum, on Aug. 15, 2020. US Secretary of State Mike Pompeo met with Hamdok 10 days later in an effort to get Sudan to establish diplomatic relations with Israel. - ASHRAF SHAZLY/AFP via Getty Images

Late last month, US Secretary of State Mike Pompeo embarked on a last-minute trip to Sudan amid a wider tour of the Middle East aimed at convincing Arab leaders to establish formal ties with Israel.

The night prior to Pompeo’s arrival in Khartoum, the State Department rushed documents over to the White House that, if signed by the president, would formally remove Sudan from the US’ state sponsors of terrorism list, Al-Monitor has learned.

US and Sudanese officials had long been in talks about removing Khartoum from the terror blacklist, and Sudan’s interim government had already largely met the main requirement laid out by the Trump administration.

But Pompeo raised a new proposal during his visit to Khartoum: That Prime Minister Abdalla Hamdok call Israeli Prime Minister Benjamin Netanyahu and immediately establish formal ties with Israel, according to two sources briefed on the meeting.

Hamdok demurred, reportedly saying Sudan’s transitional government did not have the authority to do that. Back at the White House, the rescission was called off, according to two US sources familiar with the matter.

Word of the attempt has raised concern among some in Congress that the White House’s Middle East advisers may have tried to circumvent the complex policy process for delisting Sudan in hope of scoring a political win for Trump ahead of the 2020 presidential election, and with little apparent regard for Sudan’s delicate internal politics.

A State Department spokesperson declined to comment on the diplomatic discussions in Khartoum, but told Al-Monitor that removing Sudan from the terror list remains a top priority. “Rescission is a multi-step process that depends on Sudan meeting the relevant statutory and policy criteria. Congress also plays a role in this process,” the State Department spokesperson told Al-Monitor via email. “We remain active in discussions with Sudan regarding the policy and statutory requirements for consideration of potential rescission of Sudan’s SST designation,” the spokesperson wrote. SST stands for state sponsors of terrorism.

A spokesperson for the National Security Council referred Al-Monitor back to the State Department.

Sudan has been on the terror sponsors' blacklist since 1993, where it sits alongside North Korea, Syria and Iran. Despite having harbored Osama bin Laden, Abu Nidal and other international terrorists, former dictator Omar al-Bashir’s government began cooperating with the United States on counterterrorism in 2001.

Sudan’s interim government agreed with US officials that it would come up with $335 million to settle a court ruling to compensate the families of victims of the 1998 Tanzania and Kenya embassy bombings — Washington's last significant condition for rescinding Khartoum’s terror-sponsor designation.

The long-awaited delisting is expected to ease the impoverished country’s access to foreign financial assistance and development, but the process has been drawn out.

Saudi Arabian officials previously backed away from a White House request to help Sudan meet the requirement, according to sources closely familiar with the process. The Saudi government is currently fighting a lawsuit seeking to make Riyadh pay billions in compensation to businesses, insurers, and families of the victims of the September 11 attacks.

Sudan’s interim government now says it is able to come up with the money, in part via a loan from an Africa-based development bank, US and Sudanese sources say.

But the funds had not yet been put into escrow at the time of Pompeo’s visit, and can only be distributed after Congress passes legislation that would enshrine the settlement agreement.

Despite a bipartisan push to advance such a measure by the end of September, lawmakers remain at an impasse amid opposition from Sens. Chuck Schumer, D-N.Y., and Bob Menendez, D-N.J.

Congressional sources who spoke with Al-Monitor said that if the White House prematurely delisted Sudan, it could have set the stage for an override of this decision on Capitol Hill, throwing a major wrench into the legislative process designed to ensure that victims’ families receive compensation.

According to one US source briefed on the Khartoum meeting, Pompeo told the Sudanese leader that recognizing Israel would ease the legislation’s passing through Congress. Foreign Policy first reported details of Pompeo’s request.

“It may have seemed from the Sudanese perspective a bit disingenuous for Pompeo to say they can fast-track the delisting, when he might not have been able to do so,” according to Hilary Mossberg, policy director for The Sentry, a group of researchers who track illicit money flows in Africa.

Sources on the Hill told Al-Monitor that since Pompeo’s trip, the administration has signaled that it intends to cooperate with the legislative process. Pompeo sent letters to Senators Chris Coons and Mitch McConnell urging lawmakers to advance the de-listing process by the end of the month, citing a "narrow window" posed by the upcoming continuing resolution legislation, Foreign Policy revealed on Friday.

But one congressional aide said on the condition of anonymity that the administration has ignored multiple requests for lawmakers to be briefed on the Khartoum meeting and on the White House’s intentions moving forward.

Pompeo has spoken to Sudan's prime minister at least twice since their meeting last month, according to sources familiar with the discussions. Only one of those calls has been announced by the State Department.

News of the attempt has raised further questions about the administration’s methods to convince Middle Eastern leaders to recognize Israel ahead of Trump’s reelection bid.

Last month, senior White House adviser and Trump son-in-law Jared Kushner, who is directing the initiative, said the administration was not pressuring Gulf states to recognize Israel because “a relationship that is built on pressure is not one that is going to last.”

“Countries will do things that are in their interests to do,” Kushner said.

The UAE and Bahrain signed their agreement to normalize relations with Israel at the White House on Tuesday, with Sudan’s charge d’affaires, Amira Agarib, reportedly in attendance.

On September 17, a senior State Department official dangled the possibility of upgrading Qatar to the status of US non-NATO ally after Doha’s deputy foreign minister said her government does not intend to recognize Israel without a two-state solution for the Palestinians.

Sudan’s Foreign Ministry spokesman Haidar Badawi al-Sadiq was abruptly fired last month after publicly saying the government was “looking forward to a peace agreement with Israel based on Khartoum's interests without sacrificing the values.”

Nonetheless, there are signs Sudanese leaders are open to future ties with the Jewish state.

In February, one of the transitional government’s top leaders, Lt. Gen. Abdel Fattah al-Burhan, met with Netanyahu in Uganda, leading to an agreement to open Sudanese airspace to Israeli commercial flights. That meeting was set up in part by the US State Department, according to Al-Monitor’s sources.

Pompeo also met with Burhan in the Sudanese capital after sitting down with Hamdok last month.

According to two sources briefed on the conversation, Burhan did not outright reject Pompeo’s suggestion that Sudan recognize Israel, but mentioned that his government needed several billion dollars to help offset the country’s staggering debt.

On Sunday, Axios reported that Prime Minister Hamdok's chief of staff would meet with the UAE's national security council advisor Tahnoun bin Zayed and the head of Gulf affairs at the US National Security Council, Brig. Gen. Miguel Correa, in Abu Dhabi this week to discuss the prospect of Sudan recognizing Israel in exchange for humanitarian and economic aid, as well as the de-listing of from the terror sponsors' list.

Sudan’s ambassador to the United States, Noureddin Satti, alluded to Pompeo's request in an interview with Newsweek earlier this month. “Sudan’s position on this issue has been clearly pronounced by the transitional government,” Satti said.

“To my mind, removal of the SST and other positive actions that follow should be an incentive rather than a conditionality.”