The US-led anti-IS coalition provided helicopter transport for the Iraqi raid in al-Rutba. 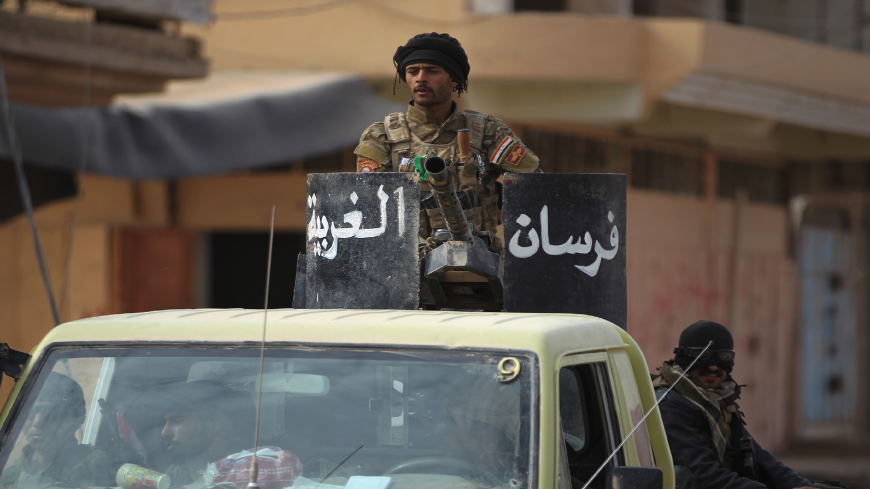 Iraqi forces are seen on Nov. 4, 2017, in the center of the city of al-Qaim, in Iraq's western Anbar province near the Syrian border, after retaking it from Islamic State a day earlier. - AHMAD AL-RUBAYE/AFP via Getty Images

Iraqi commandos killed a suspected Islamic State (IS) financier and captured an IS leader in an operation in western Anbar province on Monday, according to Iraq’s Defense Ministry.

Iraq’s Security Media Cell described the killed suspect as a “major financier” of IS in the predominantly Sunni Anbar province.

Neither a spokesperson for Iraq’s Defense Ministry nor one for Iraq’s CTS returned requests for comment.

Iraq’s security forces have arrested more than a dozen suspected IS operatives across the country over the past several days. The CTS said today its soldiers thwarted an attempted bombing in a Baqubah market.

Earlier this week, Iraq’s Defense Minister Juma Inad Saadoun visited the Anbar Operations Room to discuss continuing operations against IS cells in the western desert. On Saturday, Iraqi forces got into a skirmish in the Anbar desert with suspected IS militants, the Defense Ministry said.

Iraq’s military also continues to uncover weapons stashes in the desert near the Syrian border, the Defense Ministry said.

IS lost control of western Anbar in 2017, but a recent United Nations report said as many as 10,000 IS fighters remain at large in Iraq and Syria.

US-led international coalition troops rarely accompany Iraqi forces on joint ground operations anymore. The coalition, which underwent a routine change-of-command ceremony in Baghdad last week, has consolidated in the Iraqi capital and withdrawn from smaller bases around the country as it transitions to focus on advising and mentoring Iraqi commanders.

The transition earlier this year was hastened by the impending coronavirus pandemic and rocket attacks by suspected Iran-linked militias.

The Trump administration says it will withdraw more than a third of its coalition military personnel from Iraq before the 2020 US presidential election, which is scheduled for November.

In March of last year, Syrian Kurdish-led forces backed by the US-led coalition captured IS’s last redoubt, a town called Baghouz on the Syrian side of the Syria-Iraq border.

Thousands of foreign suspected IS fighters and their family members remain in makeshift prisons and detention camps in northeast Syria, with little prospect of trial or extradition.