Erdogan plays out Islamic 'Reconquista' with Hagia Sophia as backdrop

The reconversion of Hagia Sophia into a mosque is a power move by Turkish President Recep Tayyip Erdogan that betrays not only domestic but regional and even global ambitions. 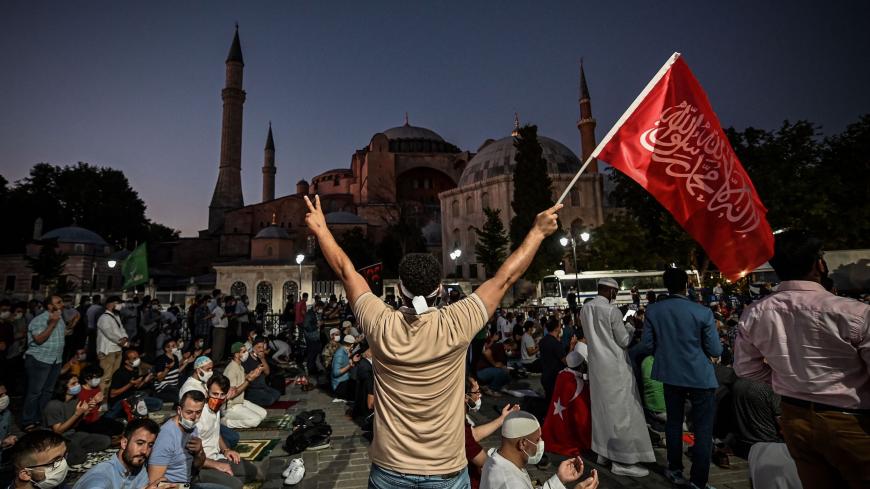 A man flashes the victory sign and waves a flag outside the Hagia Sophia museum in Istanbul on July 10, 2020, as people gather to celebrate after a top Turkish court revoked the sixth-century Hagia Sophia's status as a museum, clearing the way for it to be turned back into a mosque. - OZAN KOSE/AFP via Getty Images

The reconversion of Hagia Sophia, a symbol of Istanbul and a marvel of Byzantine art, into a mosque is a historic moment. The controversial move, put in motion by President Recep Tayyip Erdogan's decree, could fairly be seen as the Turkish Reconquista.

Istanbul was Constantinopole in 1453 when it was conquered by the Muslim-Turkish Ottomans under Mehmed II, and the East Roman (Byzantine) Empire ceased to exist. Some 40 years later, Catholic monarchs Isabella I of Castile and Ferdinand II of Aragon conquered Granada, ending the only Muslim kingdom in Europe in what became known as the "Reconquista."

The first thing Mehmed II did after entering Istanbul was to visit Hagia Sophia, the Greek Christian Orthodox cathedral. The Ottoman sultan swiftly converted it into a mosque. Constructed in 537 by the Roman Emperor Justinianus, Hagia Sophia was the world’s largest cathedral for almost a thousand years. For pious Muslim Turks, it signified the glory of the Ottoman Empire, a place of worship converted into a mosque by Mehmed, who they venerated almost as a saint.

The conquest of Istanbul, transforming the Ottoman state into an empire, bears great significance for Turkish nationalists and conservatives.

Nevertheless, following the fall of the Ottomans, the founder of the secular Republic of Turkey, Mustafa Kemal Ataturk, turned it into a museum in 1935. Hagia Sophia has ever since been a deep wound for political Islamists in Turkey, a symbol of their suppression in hands of the secularist elites. In the 1950s and the 1960s, plans to reconvert the edifice into a mosque have been a powerful political card for political Islamists and Muslim nationalists.

Hagia Sophia has remained in the national subconscious of the Turkish people as a source of national pride. Still, its conversion to a museum is more associated with secularism's triumph over Turkey's Ottoman past in the minds of political Islamists.

Erdogan's decision to annul the decree of Ataturk’s government was, therefore, the realization of a decades-old dream among his supporters. After 85 years, on July 24, Hagia Sophia will open its gates for Muslim worship once again.

In a flurry of articles within and outside Turkey, many commentators explained the move as having electoral motives. For them, Erdogan, whose electoral support in Turkey is steadily eroding according to the polls, took the dramatic step of converting Hagia Sophia into a mosque to replenish his dwindling support among conservative voters. Some speculated that in the face of a devastating economic crisis, he has a mind to call early elections. The regular schedule puts them in 2023, the centennial of the republic. In their eyes, Hagia Sophia's issue was nothing more than a tactical political move by an increasingly desperate president.

It is also seen as the last nail on the coffin of secularist Kemalism by the notorious Islamist Erdogan, a symbol of the worrisome regime change in Turkey. Yet some Turkish secularists are duped by Erdogan’s emphasis on Turkey’s national sovereignty. Playing on the anti-West impulses of Turkish secularists helped him to soften the strong opposition to his move.

The date of Hagia Sophia's reopening as a mosque is also symbolic: It is the anniversary of the Treaty of Lausanne (1923), which provided the legal basis for the foundation of the Republic of Turkey that replaced the Ottoman Empire. Erdogan sees the Lausanne Treaty more as restricting Turkey’s potential than as a diplomatic triumph that crowned the national struggle led by Ataturk.

While both these arguments may carry a grain of truth, arguably neither is the real reason behind Erdogan's Turkish Reconquista. More than anything else, reports Haaretz, “Erdogan’s Hagia Sophia decree is a power move, both symbolically and geopolitically. It is in many senses the apex of his 18 consecutive years in power, enabled by his newly recharged international standing.” Naturally, it also aimed to reinvigorate his standing domestically, yet the international ramifications of his power move are more telling.

Erdogan also characterized "the resurrection of Hagia Sophia" as "a salute to all those symbolic cities of civilization from Bukhara to Andalusia."

His message and actions make up his forceful claim for the global leadership of Muslims at a time when Turkey’s aggressive foreign policy has proliferated its military presence from the mountains of Iraqi Kurdistan to Syria and with some degree of success to Libya, where he confronts such traditional power centers of the Sunni Muslim world as Egypt, Saudi Arabia and the United Arab Emirates. He audaciously challenged France and Greece, thus implicitly the European Union, in Mediterranean geopolitics. He is looking for a way to project his and Turkey’s influence on Yemen as well as Sahel and sub-Saharan Africa. With military bases in Qatar, the Gulf and Somalia and aspiring to build them in Libya, Turkey is already involved in the most volatile geostrategic arenas of the globe. Its leader must have global appeal. It's mandatory for his survival.

That is the main driver behind Erdogan’s Hagia Sophia move that has stirred unease in the Western world, especially in the Christian world. Pope Francis stated unequivocally that the Hagia Sophia decision pained him, while the Russian Foreign Ministry limited itself to expressing regret. US Secretary of State Mike Pompeo had issued a warning before the decree was made. UNESCO, which registered Hagia Sophia as a world cultural heritage site, is now reviewing its status.

It is impossible for Erdogan not to have calculated all the backlash that his decree could bring. Only a year ago, in a live broadcast, Erdogan had responded to a question that although reverting Hagia Sophia to a mosque had been his youthful dream, for him to make such a decision would be a provocative trap he was keen not to fall into.

After a year, he seems much more self-confident about placing himself in history as the victor of the Turkish Reconquista, giving a sense to world Muslims that Islam is winning its last battle with the West, against the “new crusaders,” under his leadership.