Does Erdogan think Sisi is bluffing in Libya?

Trump and Putin can prevent the "Syrianization" of Libya. 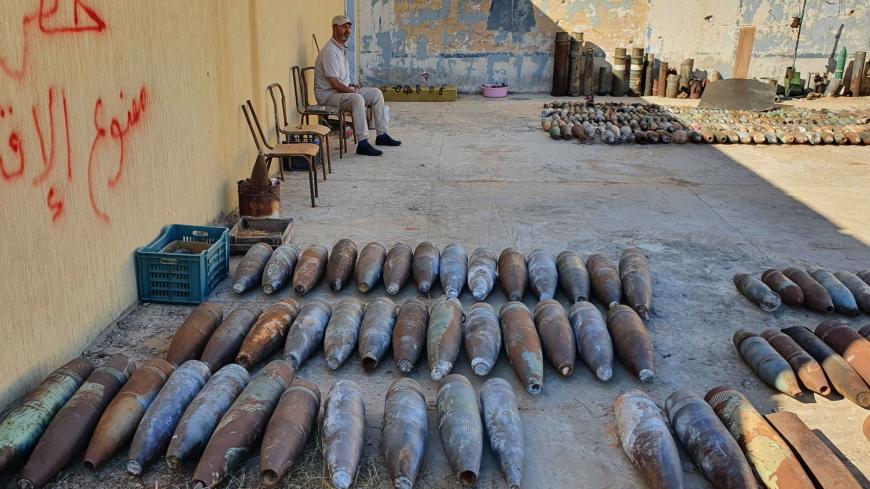 A military engineer from the UN-recognized Libyan Government of National Accord watches as ammunition and explosives uncovered from areas south of the capital are sorted ahead of their disposal in the Libyan capital, Tripoli, July 22, 2020. - MAHMUD TURKIA/AFP via Getty Images

Egyptian President Abdel Fattah al-Sisi is flexing diplomatic and military muscle in Libya to bring about a cease-fire and a new round of peace talks.

While Libya is the battlefield, there is a larger regional contest shaping up in the standoff between Sisi and Turkish President Recep Tayyip Erdogan, who, it seems, is unimpressed by the Egyptian president’s red lines and threat of force.

It will therefore likely be up to Russian President Vladimir Putin and US President Donald Trump, rather than Sisi or anyone else, to prevent an escalation.

"Time is not on our side"

UN Secretary-General Antonio Guterres in July described conditions in Libya as "gloomy," adding that "time is not on our side." He expressed concern about foreign interference in the war, the 400,000 Libyans displaced by the conflict, and the spike in COVID-19 cases. A UN report this week detailed the scale of civilian deaths attributed to the conflict over the past month.

The World Bank had designated Libya at risk of endemic poverty as a fragile state experiencing high intensity conflict, and that was before the pandemic.

Libya has become one of the Middle East’s regional fault lines, with Egypt, the United Arab Emirates and Saudi Arabia on one side, and Turkey and Qatar on the other, as Gilles Kepel explained in a recent podcast.

Turkey and Qatar are considered supporters of the Muslim Brotherhood, which the others consider a terrorist group.

Russia and France also back Hifter, and Erdogan has been at odds with NATO ally French President Emmanuel Macron over differences over Libya, as Ayla Jean Yackley and Bryant Harris report.

The United Nations recognizes the Government of National Accord, so Erdogan believes he has international legitimacy on his side.

If this all seems very 1914, even worse are the random acts that can escalate things.

Hagar Hosny writes that some in Egypt speculate that a recent terrorist attack by Islamic State-linked terrorists in Egypt’s Sinai is connected to Sisi’s decision to intervene in Libya. In other words, the fight in Libya is about containing Islamist and Brotherhood affiliated groups in Egypt and elsewhere in the region.

On July 20, Sisi said a parliamentary resolution that day approving combat missions outside the country’s border had provided Egypt’s intervention in Libya “international legitimacy” if it decides to deploy.

Hifter has support among tribes in northeast Libya, where the oil fields are located. Sisi declared any move by the government to take Sirte, the hometown of former dictator Moammar Gadhafi and gateway to the fields, as a red line for Egypt. Sisi also has called for further arming of Libyan tribes in the region to hold off the Turkish-backed government offensive.

Does Erdogan think Sisi is bluffing?

With Hifter on defense, Sisi has also proposed a cease-fire and a new round of political talks in conjunction with his threat of military force, although the initiative may be dead on arrival, from Turkey’s perspective.

Erdogan is loath to grant a seat at the table to Hifter, and may not take Sisi’s warning about the use of force seriously, Metin Gurcan writes.

“Sisi may be eager for an intervention, hoping to boost his popularity in the Arab world and sustain the UAE’s financial backing, but Ankara doubts the Egyptian military shares his eagerness,” writes Gurcan. “According to Turkish assessments, Egypt’s military would be reluctant to engage in a cross-border campaign with ambiguous military goals and risk losses that might damage its credibility and fuel internal rifts.”

The Turkish assessment is that Algeria and Tunisia would see Egyptian intervention as an unwanted escalation, as Simon Speakman Cordall explains, and that the United States and Russia, both close allies of Egypt, would advise against it.

Did Putin get Erdogan to cave?

Cengiz Candar writes that while a joint statement July 22 from Turkey and Russia backed diplomacy in Libya, that may not mean much because Erdogan feels he has the upper hand with Egypt and Hifter.

“Turkey committed itself, upon Russian demand, to refrain from going to war for Sirte and al-Jufra. Also, the reference to “intra-Libyan political dialogue” might be interpreted as Turkey, albeit implicitly, conceding to accepting Hifter as a party in the peace process, given the Libyan leader was also present at the Berlin Conference,” Candar explains.

Nonetheless, Candar concludes, “All those who have faith in Erdogan's Libyan policy, which is now contained by Russia, can count on the inconsistency of Turkey's president. There is nothing permanent for Erdogan. Hence, although a war with Egypt that could have erupted due to his miscalculation is averted for the time being, one can never know what the near future might bring.”

Semih Idiz writes that Erdogan’s personal relationships with both Putin and Trump have “strengthened Ankara’s hand” and “averted serious crises, which could even have escalated into direct military confrontations between Turkish and US/Russian forces, most notably in Syria” adding, “Ankara has also not held back from using its ties with Moscow and Washington against these powers, depending on the occasion.”

Can the United States and Russia stave off further crisis?

Libya is a collapsed state in conflict, a battlefield for regional powers since the overthrow of Gadhafi in 2011. And like Syria and Yemen, Libya’s fate is not ultimately in Libya’s hands.

The Libyan conflict is, regrettably, on a path of "Syrianization," as Fehim Tastekin called it, the result of the jihadis shipped there by Turkey to fight on behalf of the Libyan government against Hifter.

As in Syria, Putin and Erdogan find themselves at odds but willing to talk it out.

And as in Syria, Putin is working all angles, not only with Erdogan and Sisi, but also with Abu Dhabi Crown Prince Mohammed bin Zayed (known as MBZ) and others, as Samuel Ramani writes.

And that brings us to Trump, who has been actively engaged in his own summit-level diplomacy with Sisi, Erdogan, MBZ, Macron and Putin. All operate by personal connection and the action moves when they talk. Libya is a matter of war and peace, and the United States can further seize the role of invaluable mediator. The risks of escalation remain high, but the tele-diplomacy has the potential to energize the UN Security Council — especially if Trump, Putin and Macron get on the same page — for an active role in bringing an overdue reprieve to the Libyan people.