Israel, Iran and the United States are all not backing down in Syria, but US-Iran prisoner talks may still have a chance. 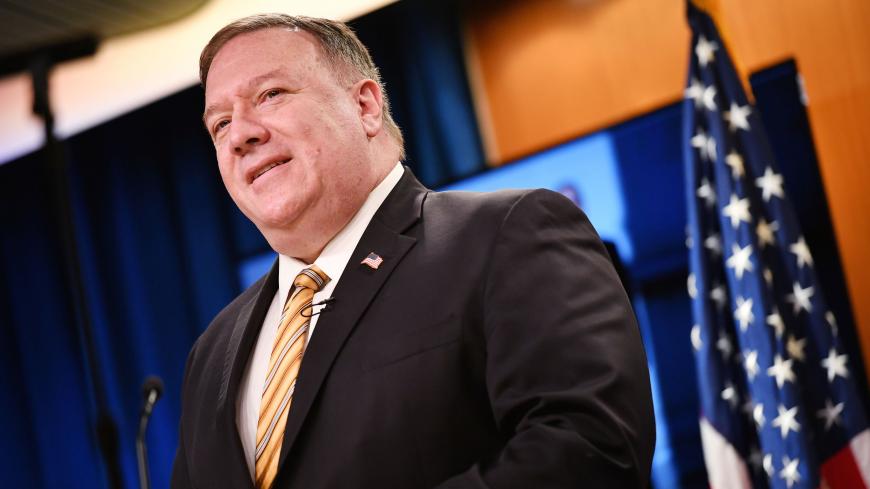 US Secretary of State Mike Pompeo speaks during a press conference at the State Department in Washington, June 24, 2020. - MANDEL NGAN/POOL/AFP via Getty Images

US to Iran: Seriously?

Iranian President Hassan Rouhani said this week that he would negotiate with the United States if the Trump administration apologizes and compensates Iran for losses from US policies of maximum pressure.

US Secretary of State Michael Pompeo said the prospects of the United States apologizing to or compensating Iran are “not remotely serious,” adding, “We’re happy to engage in conversations with them when the time is right, but the conditions that suggest somehow we give a bunch of money to the Iranians so they can foment terror around the world is simply ludicrous.”

The State Department, meanwhile, released its annual country reports on terrorism, and Iran again held top billing. The report cited Iran’s support for Hezbollah, “Palestinian terrorist groups in Gaza, and various terrorist groups in Syria, Iraq, and throughout the Middle East,” backed by the Islamic Revolutionary Guards Corps (IRGC) and its Quds Force; the United States designated the IRGC, including the Quds Force, as a terrorist organization in April 2019.

The Trump administration continued its barrage of sanctions on Iran and its allies, announcing new penalties on Iran’s metals industry, subsidiaries and agents; companies and individuals delivering gasoline to Venezuela; and investors and supporters of Syrian President Bashar al-Assad, as Elizabeth Hagedorn reports here.

Syria: Iran won’t back down, and neither will Israel

Ali Hashem got the scoop this week that the Quds Force is "there to stay" in Syria. Iran’s intervention in Syria was not an “uncalculated adventure,” an IRGC source told Hashem, it “was a calculated risk and for that reason Iran decided from day one not to have a 'Plan B' in Syria, and that’s why despite the billions of dollars that were poured, the tens of thousands of fighters from across the world that were sent, the American and Israeli involvement, the name of Syria’s president is still Bashar al-Assad, and we are in Syria upon his government’s request. And Iran is in the meantime standing by Syria to face the economic war that’s launched by the United States and its allies.”

That the IRGC is in Syria has been top of mind for Israeli decision-makers, as Ben Caspit reports. Israeli Prime Minister Benjamin Netanyahu, like Iranian hard-liners, worries that after November, no matter who the next US president is, prospects for US-Iran diplomacy will increase. In the meantime, Israel is not letting up on its own version of maximum pressure in the form of periodic strikes (neither confirmed nor denied in Jerusalem) on Iranian and Iranian-backed groups and bases in Syria.

Today, Iraqi counterterrorism forces raided offices of the Iran-backed Kataib Hezbollah militia in in southern Baghdad, as Ali Mamouri reports. Iraqi Prime Minister Mustafa al-Kadhimi, who previously headed the National Intelligence Service, is giving priority to establishing sovereignty and control over all armed groups in Iraq, and preventing any further threats and attacks on the US Embassy and American diplomatic and military personnel.

In the meantime, Iraq continues to seek ways to diversify its energy sources, without disrupting its relationship with Iran, on which it still relies for much of its electricity needs. Adnan Abu Zeed reports here on how General Electric is trying to assist Iraq with its energy needs, and Omar Sattar here on Iraq’s energy diversification efforts with Saudi Arabia and the Gulf.

Iran: A different kind of pressure, from within

Like many countries, Iran is still reeling from COVID-19. Attempts to loosen restrictions on social movement are followed by spikes in cases. Iran now has had 10,239 deaths out of 217,724 registered cases, the highest death toll in the region, although the fatality rate of 4.7% falls slightly below the world average of 5%.

The IMF projects that Iran’s economy will shrink by 6% this year, after a contraction of 7.6% in 2019. The continued downturn is the result of US sanctions, the oil price decline and the COVID-19 pandemic. Ali Dadpay explains that in addition to these external constraints on the economy, the government’s inability and overall unwillingness to reduce barriers to economic growth, reform public spending and deal with corruption means that Iranians can expect rising prices and declining income.

Rouhani also faces what Shervin Ghaffari describes as a new conservative era in Iranian parliamentary politics following elections earlier this year. The new Majles speaker is former Tehran Mayor Mohammad Ghalibaf, the first former IRGC general to take up that post, a sign of a new legislative consensus, and constituency, for more conservative policies at home and abroad. The parliament has a 76% conservative majority and now includes at least two dozen former and current IRGC members.

The new conservatives will probably blame Iran’s dire economic straits on Rouhani, and claim the country’s economic plight the result of the Iran nuclear deal and negotiating with Europe and the West, Rouhani’s signature achievements until they weren’t. The conservatives’ positions will, in the end, reinforce the hard-line views of Supreme Leader Ayatollah Ali Khamenei and absent a major reset in Iranian politics over the next year, further diminish prospects for a Reformist comeback ahead of next year’s presidential elections (Rouhani, a moderate, cannot run for third term).

Trump: Still ready for "big deal" with Iran, but Rouhani boxed in

Following the June 5 release of Michael White, an American who had been held in Iran for two years on charges of insulting Khamenei, Trump tweeted, “Thank you to Iran. Don’t wait until after US Election to make the Big deal. I’m going to win. You’ll make a better deal now!”

The deal for White was the second prisoner swap in six months, and the prospect of more might still have a pulse. On June 16, US envoy for Iran Brian Hook said he hoped for further prisoner exchanges and negotiations on the wide range of vexing issues in US-Iran relations.

Rouhani’s apology request may have been a gesture to test American intentions to talk, but the Trump administration wasn’t buying it. The conventional wisdom is that Iran will hold its diplomatic cards with Washington until after the US presidential elections in November, when Tehran will know with whom it will be dealing for the next four years.

The prospects of US-Iran talks, however, seem slim, as Rouhani, even if his offer was serious, is boxed in by both Khamenei, who rejects diplomacy with the US as "poison," and the new hard-line parliament (Majles), which backs the leader’s views.

If anything is going to happen before November, or maybe even after, it will likely be in the back channels, and via the good offices of Switzerland, which represents US interests in Iran and has facilitated the successful exchanges.

Although Mark Fitzpatrick cautions about whether a "big deal" is possible so close to the election, Trump still “might be able to bring more American prisoners home” with some deft diplomacy.

And that would be a win-win for the United States and Iran, as well as overdue relief for those unjustly detained and their families.