Iraqi intelligence and military operations against IS have dealt a heavy blow to the group, which has lost a number of its leaders and fighters in recent months both inside and outside of Iraq. 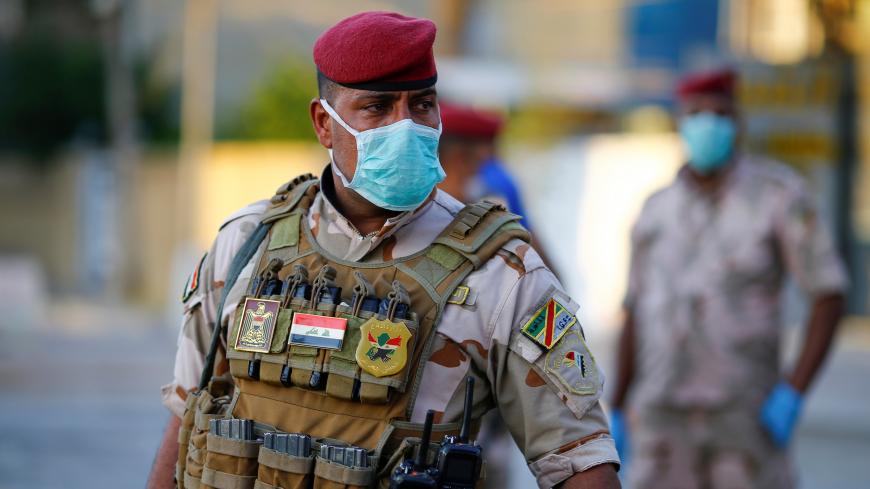 An Iraqi soldier wears a protective face mask as he stands guard at a checkpoint during the holy fasting month of Ramadan, in Baghdad, Iraq May 3, 2020. - REUTERS/Thaier Al-Sudani

Spokesman for the commander-in-chief of the Iraqi Armed Forces, Brig. Yahya Rasoul, said June 6, "The Islamic State is trying to hide in the desert, mountainous and valley regions, but the security and military redeployment will leave them no space to exploit for transportation and supplies."

The Iraqi intelligence services have been intensifying operations against the Islamic State over the past months, pursuing its new caliph Abdullah Qardash in cooperation with the US-led international coalition that killed former caliph Abu Bakr al-Baghdadi in October 2019.

Every other day the Iraqi authorities announce the arrest of IS operatives in the northern and western areas of the country and often the killing or the arrest of an IS leader. Most recently on May 27, the Iraqi authorities announced the killing of Mutaz al-Jabouri, known as Haji Tayseer, and nicknamed “the architect of death.”

A week before the operation targeting Jabouri, the National Intelligence Service, which is still run by Iraqi Prime Minister Mustafa al-Kadhimi, announced the arrest of Abd al-Nasser Qardash, IS’ second-in-command and brother of the new caliph.

The director of intelligence and counterterrorism at the Iraqi Ministry of Interior, Abu Ali al-Basri, told Al-Monitor, “Our battle against terrorism is based on intelligence par excellence, and the more our services succeed in infiltrating IS, the more we can eliminate its operatives among our citizens.”

He praised the organization's success in “taking down the terrorist groups of [IS] Baghdad Governor Manaf al-Rawi and the killing of Baghdadi, leading to the dismantling of Al-Furqan Foundation," and "especially our airstrikes that were based on very accurate information of leadership targets and IS camps, in addition to dismantling its cells inside the cities.”

Basri noted, “The Falcons Intelligence Cell managed in the first [three months] of 2020 to significantly weaken IS capabilities, as it arrested over 1,287 operatives, killed at least 72 others, took control of 73 caches of munitions and ammunition and destroyed more than 75 locations that the group was using to launch its operations in Iraq.”

The Iraqi authorities are working to pursue IS outside the country as well. The National Intelligence Service and the Falcons Intelligence Cell are conducting joint operations with the international coalition and the Syrian Democratic Forces in some Syrian areas.

Salem al-Ajili, an IS leader who was fighting in Syria alongside Baghdadi, told Al-Monitor from inside a detention center in Baghdad that the group is indeed falling apart as a result of the many blows to its leadership.

He said, “The group’s movement was affected when Baghdadi was bombed in al-Qaima in April 2017. Although the group can still carry out attacks inside Iraq, its operatives and leaders fear new strikes, so IS’ activities have reduced.”

Ajili went on, “Disorder has prevailed within IS ever since Qardash became the new caliph, not to mention the airstrikes and arrests that have weakened the group and affected its movements. Meanwhile, some fighters have yet to accept Qardash.”

Over the past 18 months, Iraqi forces have been arresting moderately ranked IS officials up to the top leadership, notably Baghdadi, Jabouri and Qardash’s brother. They now have access to the group’s entire structure, and intelligence gathered from these operations indicates that IS leaders are stationed in Syria, not Iraq.

Security researcher Fadel Abu Ragheef told Al-Monitor, “The group started falling apart over the past couple of years, and communication between its leaders became harder due to the intelligence and military operations carried out by the Iraqi forces.”

Abu Ragheef added, “IS lost about 80% of its ability to move around and attack as it used to in 2014, and it lacks the power to occupy any area, so it will continue to depend on individual operations with explosive devices and attacking checkpoints, but it will not be able to confront any major force.”

The Iraqi authorities believe that they have reached a state of stability with the success of their recent operations, and they see the group as semi-dismantled after losing two leaders in less than 10 days.

Spokesman Rasoul told Al-Monitor, “The Iraqi forces are cracking down on IS and its cells on an almost daily basis, and they are constantly monitoring its leaders and their movements. This shows that the group has become exposed and clearly visible to us.”

Rasoul added, “IS is no longer the same group that used to terrorize and threaten to reach other countries. It is no longer able to even create media propaganda to boost its fighters’ morale. Its operations have become limited, and it was dealt a severe blow with the arrest of some of its leaders.”

Despite their important intelligence capabilities, the Iraqi forces relied on cooperation with the international coalition that provided air cover. The recent military and intelligence strikes have curbed IS’ movement and operations even further, though the group could manage to carry out more attacks against checkpoints or civilians in Iraqi cities and villages.

IS has turned into a number of dispersed groups that cannot meet nor follow a central command, Ajili explained, which will eventually result in IS ceasing major operations.