Congress is quickly lining up behind an AIPAC bill to deepen COVID-19 cooperation with Israel while sidelining China. 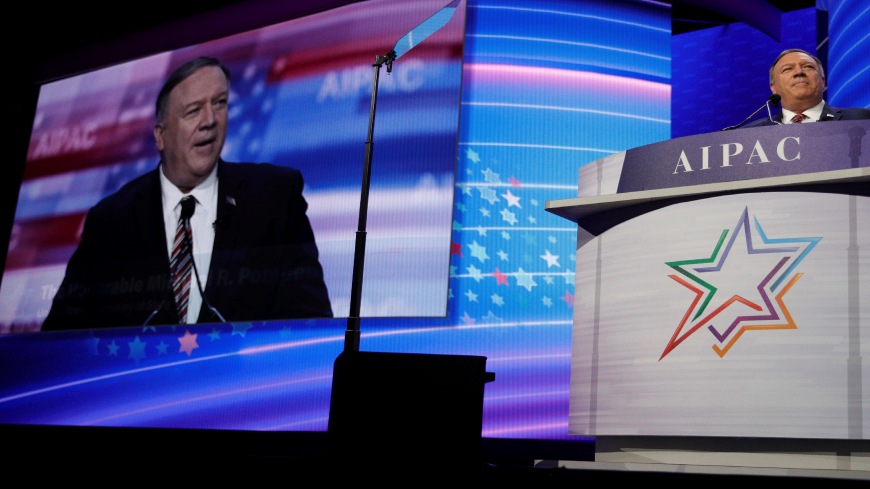 US Secretary of State Mike Pompeo delivers remarks during the AIPAC convention at the Washington Convention Center in Washington, US, March 2, 2020. - REUTERS/Tom Brenner

The American Israel Public Affairs Committee (AIPAC) is making significant headway in lobbying Congress to pass a new bill that would deepen coronavirus cooperation with Israel while pushing China out of the way.

Sen. Ted Cruz, R-Texas, and Rep. Chris Pappas, D-N.H., both introduced respective versions of the bill in the Senate and the House last month. The House version is dubbed the “Expanding Medical Partnerships with Israel to Lessen Dependence on China Act.” AIPAC has issued a series of action alerts asking its activists to call their lawmakers in support of the bill in recent weeks.

“Our dependence on China for life-saving medications and treatments is deeply problematic,” Cruz said in a statement upon introducing the legislation. “We’re now seeing the leader of the Chinese Communist Party — in the midst of a public health crisis they allowed to go global and endanger millions — threaten to withhold life-saving medical supplies and medications from the United States. By expanding partnerships with Israel — an ally and a global leader in medicine — to develop coronavirus treatments, this legislation is a common-sense step to address that threat.”

While Republicans have aggressively highlighted China’s apparent threat in March to halt pharmaceutical exports to the United States as the impetus for the bill, Senate Democrats have instead opted to focus on the need to strengthen US-Israeli cooperation in fighting the pandemic.

The legislation would allocate $4 million in grants to Israel every year through 2023 to develop health technologies “with an emphasis on collaboratively advancing the use of technology, personalized medicine and data in relation to COVID-19.” In order to receive that funding, Israel would need to make a matching contribution. Both the United States and Israel are in the process of developing a coronavirus vaccine.

More than 60 bipartisan co-sponsors signed onto the House version of the bill in the space of a single day last week. And the Senate Foreign Relations Committee included the legislation as part of a major Israeli military aid bill that it advanced last month.

Sen. Chris Coons, D-Del., an original co-sponsor of the bill who sits on the committee alongside Cruz, addressed the legislation during a webinar on opportunities for Israeli businesses to secure US funding to sell COVID-19 solutions to the United States. The webinar was hosted by the law firm Holland and Knight, a registered foreign agent for Israel. Holland and Knight also lobbies Congress on behalf of Teva Pharmaceuticals, an American-Israeli company.

China lost a $1.5 billion bid to build a water desalination plant in Israel after Secretary of State Mike Pompeo publicly warned Prime Minister Benjamin Netanyahu against the deal in a visit to Jerusalem last month. This week, Israel excluded China from a bid to establish 5G networks throughout the country after Defense Secretary Mark Esper reportedly warned former Defense Minister Naftali Bennett in February against awarding a contract to the Chinese-owned Huawei.

And just last week, Assistant Secretary of State for Near Eastern Affairs David Schenker warned US partners in the region that Chinese investment, contracts and infrastructure projects could “come at the expense of the region’s prosperity, stability, fiscal viability and longstanding relationship with the United States.”