Turkey’s transfer of Syrian families to Tell Abyad from Afrin has reignited worries of demographic engineering in northern Syria. 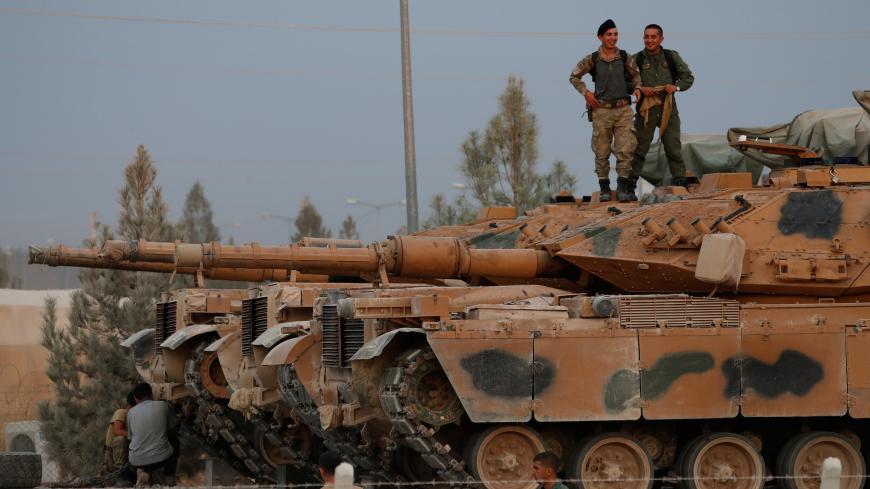 Turkish soldiers stand on top of a tank in the border town of Akcakale in Sanliurfa province, Turkey, Oct. 11, 2019. - REUTERS/Murad Sezer

Turkey has transferred hundreds of people to the northeastern Syrian town of Tell Abyad from the Turkish-controlled Operation Euphrates Shield region, stunning many families displaced from the town that have been hoping to return to their villages in the area, which fell under Turkish control during a military operation in November 2019. A new round of population transfers is reportedly underway.

Turkish President Recep Tayyip Erdogan makes no secret of his intention to uproot Kurdish self-rule in northern Syria and change the demographic character of the region, often reiterating Ankara’s plan to move up to two million refugees to a safe zone that is planned to be set up in the Operation Peace Spring region in the northeast. Addressing the UN General Assembly last year, Erdogan said Turkey initially planned to transfer up to one million refugees to the area by constructing 140 villages and 10 towns in the region. The second phase of the plan involves extending the resettlements to the town of Deir ez-Zor, which lies on the critical M-4 highway linking the country’s east and west.

Turkey’s cross-border operations in Syria remain in full swing despite the novel coronavirus outbreak that sent the world into turmoil. Population transfers to the east of the Euphrates River from the western side are increasing along with the Turkish military activities.

On April 20, a convoy of 151 vehicles, including 14 buses, departed from Jarablus, arrived in Turkey via the Karkamis crossing and then crossed into Tell Abyad from the Turkish town of Akcakale.

Videos of the convoy were leaked over social media, forcing the governor’s office in Turkey’s southern border province of Urfa to respond. A written statement on April 21 inexplicably claimed that the convoy was carrying families displaced from Tell Abyad under the Kurdish administration. Turkish media reports hailed the news, saying downtrodden families who had escaped the Kurdish rule in Tell Abyad and settled in Afrin were now returning to their homes.

Some people who had escaped Tell Abyad during the US-backed Syrian Democratic Forces offensive against the Islamic State in 2015 did take refuge in Turkey. Yet, there is no evidence showing Afrin was hosting displaced people from Tell Abyad. Most of the families resettled in Afrin were Syrians who escaped the battles in other parts of the war-torn country and took refuge in the Operation Euphrates Shield area. Another lingering question about the move is why the convoy crossed into Turkey from the Karkamis crossing instead of Oncupinar, only eight kilometers (five miles) from Afrin. Four parliamentary questionnaires submitted by Turkey's pro-Kurdish Peoples’ Democratic Party on the transfers also remain unanswered.

According to local Syrian Kurdish and Arab sources contacted by Al-Monitor, the convoy carried the families of Syrian fighters who fought alongside the Turkish army during Operation Euphrates Shield. It was one of demands of the fighters who staged two separate protests against Turkey on March 17 and April 7 in Tell Abyad over their overdue salaries. Thus, Turkey’s move might be a response to fighters’ demands to reunite with their families west of the Euphrates.

Hamdan al Abd, an ethnic Arab and the former co-chair of Tell Abyad’s now defunct Kurdish-led local council, also thinks the people transferred to the region are mainly families of Syrian opposition fighters that fought under the banner of the Syrian National Army.

Local Kurdish sources deem the attempts a demographic intervention against the Kurds. Yet, according to Abd, the moves do not just target the Kurdish population and the Arab population suffers as well.

“Armed groups and the Turkish forces are displacing people everywhere regardless of their ethnic or religious identities. Their houses are being taken over by their men. People are getting arrested, stripped of their rights for allegedly cooperating with the self administration or with the Kurds,” he said.

Armed clashes between Turkish-backed groups in Tell Abyad and Ras al-Ain are another source of concern for the locals, Abd said. The clashes are reportedly caused by disputes over the sharing of money and property that the opposition fighters deem the spoils of war.

“It's tragic for the locals. [The fighters] are racketeering, looting private property. They steal agricultural products, furniture, water pumps and other technical wares. They loot the granaries and sell the grain to Turkey. Bakers are having trouble finding flour. They seize generators,” he said. “Even doctors can’t go to their clinics out of fear of being kidnapped or extorted.”

According to Abd, some 140,000 people left Tell Abyad and surrounding villages for refugee camps near Raqqa, Ain Issa and Kobani, and the displacements are ongoing.

Apparently, Russia, which conducts joint patrols in the region under a deal between the two countries to end Operation Peace Spring, is not willing to interfere.

“We asked Russia to provide safe passage for people who seek to return to their homes but we couldn't receive an assurance or an answer,” he said. “For example, houses in the village of Ser Kerek on the M-4 highway were bulldozed. We sent a protest note to Russia about this but couldn't receive any answer. We also sent a list of the people whose houses were demolished.” Ras al-Ain has suffered similar atrocities, Abd added.

An April 25 joint statement by dozens of Arab tribes echoes this outcry. Drawing attention to the Syrian opposition fighters’ crimes in the region, the statement accuses fighters of kidnapping people for ransom and disrupting education and health care services. It also accuses Turkey of demographic engineering in the region.

Tell Abyad became a hot spot for Erdogan after the Kurdish-led SDF liberated the town from IS in 2015. “Whose land is it? 95% of the people in that town are Arabs and Turkmens, with 5% Kurds. … This is now posing a threat to Turkey, thus Turkey will take necessary measures,” Erdogan raged, accusing the Kurdish groups of ethnic cleansing of Arabs and Turkmens in the region.

Erdogan’s accusations of ethnic cleansing also seem questionable. Most of the displaced people who left their homes during the fight against IS returned to the region by 2015, except for those who are wary of returning because of their former links with IS.

Similarly, Ras al-Ain had been almost equally Kurdish and Arab, with the Arabs living mainly in the west and the Kurds in the east. The region hosted a Chechen population that had been exiled from Caucasia during the 19th century.

It is far from the first time Kurds have faced demographic engineering attempts. Following the Syrian independence in 1945, northern Syria saw many attempts to set up an Arab corridor against the Kurdish population. In 1969, the Syrian government expropriated more than one million hectares of territory owned by Kurds under what it called “land reform.” Another Arabization attempt was a plan to set up an Arab corridor 280 kilometers (174 miles) long and 15 kilometers (nine miles) wide stretching from Ras al-Ain to the Iraqi border to swallow more than 330 Kurdish villages in the region.

Following the construction of the Tabqa Dam, 56 villages were set up in the area, 41 of them on this corridor and 15 in the Raqqa countryside. Some 4,000 Arab families whose lands had been submerged by the dam were settled into these villages, each of which consisted of some 150 to 200 houses. An additional 7,000 Arab families from Aleppo, Manbic and al-Bab who lost their homes to various irrigation projects were also settled in another mainly Kurdish town of Jazeera. They received a wide range of government support from housing to weapons. It seems that history is repeating itself.