Why is Turkey prioritizing shopping malls in reopening plan?

Ankara’s haste to reopen shopping malls may be an effort to revive sagging consumption, but it also has to do with a tight nexus between politicians and businesses in the country. 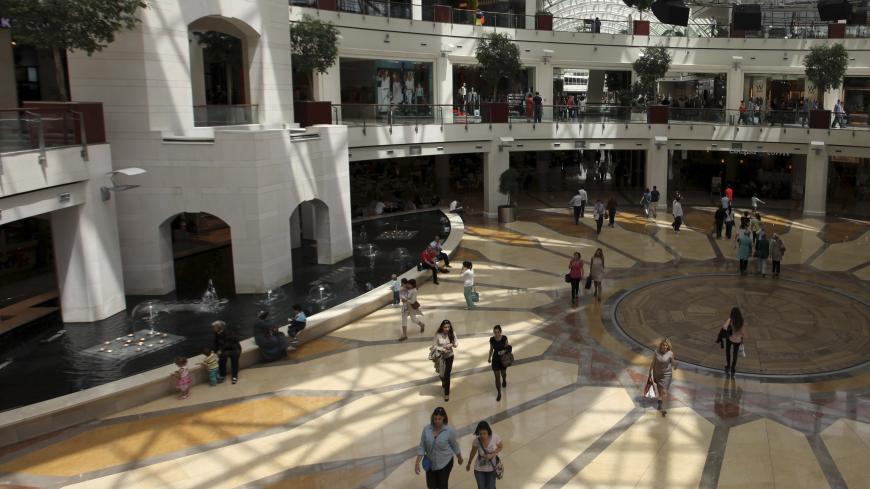 Shopping malls, which have been shut in Turkey due to the coronavirus pandemic, are set to reopen May 11. Here, shoppers walk in the Istinye Park shopping mall in Istanbul on May 17, 2013. - REUTERS/Osman Orsal

The Turkish government’s plan for a May-June transition to a “new normal” in the COVID-19 pandemic has come under fire for prioritizing the reopening of shopping malls amid concerns over a contagion flare-up and doubts over the economic viability of the move.

Ankara claims to have the pandemic under control, but while myriad small businesses remain closed, its decision for shopping malls to reopen May 11 is widely seen as a response to pressure from debt-ridden mall owners, most of whom are close to the governing Justice and Development Party (AKP) and have seen their businesses thrive under its rule. Most of those giant facilities were built using foreign exchange loans and their owners are now said to be struggling to repay the money as the pandemic keeps exacerbating Turkey’s currency woes.

President Recep Tayyip Erdogan this week spoke of “relaxation in provinces where cases are on the decline,” but risky facilities such as shopping malls will reopen in big urban centers, including Istanbul, which is the epicenter of the pandemic in Turkey with about 60% of the cases in the country.

The Council of Shopping Centers, which claims to represent most of the nearly 450 shopping malls in Turkey, has confirmed the malls will reopen May 11 and that shop tenants will be required to pay rents from June 1 onward. Tellingly, it was Treasury and Finance Berat Albayrak who sought an even earlier reopening, on May 4, according to council chair Huseyin Altas.

The COVID-19 crisis caught the Turkish economy in an already fragile state, reeling from a severe currency shock in 2018. According to central bank data, credit card spending in the six weeks since March 11, when Turkey confirmed its first COVID-19 case, was down 25% from the six weeks prior to the outbreak, with more than 50% of that spending going to food and health and cleaning products. The sharp downtick in consumer spending — a telling sign of how Turkey’s economic woes have deepened — must have alarmed Albayrak. This may have driven his eagerness to reopen shopping malls, which account for nearly a fourth of annual consumer spending, without even consulting the scientific board of the Health Ministry.

The priority accorded to shopping malls has to do not only with reviving consumption but also with keeping the mall owners afloat. Shopping malls have become a hallmark of the AKP’s 17-year rule, mushrooming across Turkey as part of a construction boom encouraged by the government. Today, they number 125 in Istanbul alone and 436 across the country. Most of the malls were erected by companies with well-known connections to the AKP in yesteryears when external loans were relatively cheap and easy to obtain. The mall investors borrowed blithely in hard currency, but the Turkish lira’s fast depreciation from 2016 onward left them with hefty foreign-exchange losses. Their relationship with shop tenants became strained as well, for rental contracts were also denominated in hard currency. The currency crisis in 2018 forced the conversion of the contracts into Turkish liras, while the troubles of shopping malls grew amid a shrinking market that left them with significant occupancy problems. On top of all that came the COVID-19 crisis.

The increase in online sales has become an additional threat to shopping malls, now driven further by the pandemic. Even before the virus reached Turkey, Altas was complaining of “unfair competition” from online sellers, who, he said, were able to offer much lower prices because they were free of rent burdens and could evade taxes. “We demand urgent regulation for electronic commerce,” he said in February, warning that unless regulations were put in place, the trend would hit conventional retailers and their employment and, by implication, the prospects of shopping malls.

Yet shop tenants remain concerned that even if the malls reopen, their sale volumes could hardly rebound to pre-pandemic levels and are likely to fall short of even covering rents. Rental contracts with mall owners remain a source of grievance and disagreements appear bound to grow under the added impact of expanding online commerce during the pandemic. Mall owners argue the rebound of demand will be quick, but shop tenants expect a low footfall for at least three months.

The United Brands Association, which represents 500 leading Turkish brands, has urged a revision in rent payments based on sales turnover. In a newspaper interview last week, association chair Sinan Oncel said, “Some enterprises have not earned a single penny for a long time. … We’ve already missed a season, failing to sell the products we had manufactured and paid for. Now it’s time to pay for new products. We’ll be selling at cost throughout the summer. And people will not be coming to shopping malls as before. The footfall will be low. That’s why we request that rent payments be calculated on the basis of turnover. The loss of foreign tourists alone will cause a 40% decrease in turnover. This is not sustainable.”

Economic concerns aside, the risk of inflaming the contagion is even more crucial. Although the plan to reopen the malls involves social distancing measures and a continued closure of eateries and movie theaters, fears over contagion risks remain rife.

Health experts and ventilation engineers highlight the risk of contaminated air in shopping malls. According to Yunus Yener, head of the Mechanical Engineers Chamber, safe air conditioning in the malls, including a 24-hour inflow of fresh air, requires a series of extra precautions and technical overhauls. Such measures cannot be left to the professional and conscientious responsibility of mall operators alone, Yener says, stressing the need for a tight control by the authorities.