Former Vice President Joe Biden told campaign donors today that any Israeli annexation of the West Bank would “choke off any hope for peace,” according to a transcript of the presumptive Democratic nominee’s remarks seen by Al-Monitor. 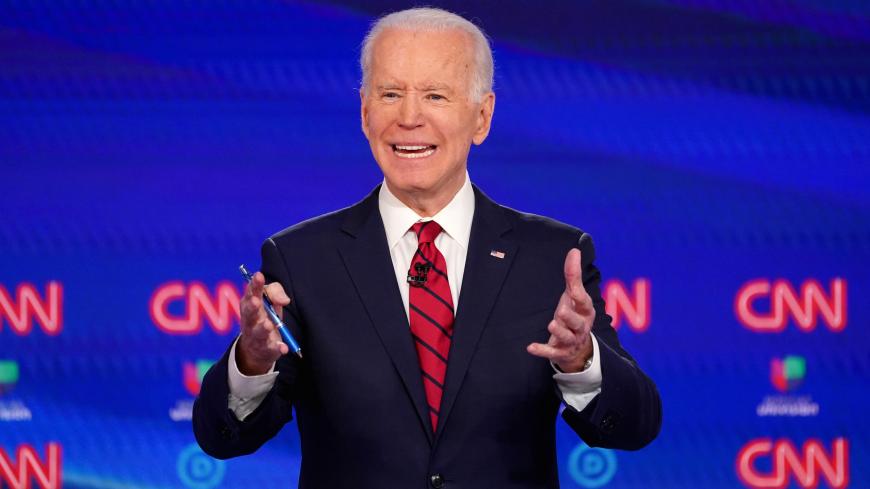 Democratic US presidential candidate and former Vice President Joe Biden speaks during the 11th Democratic candidates' debate of the 2020 US presidential campaign, held in CNN's Washington studios without an audience because of the global coronavirus pandemic, March 15, 2020. - REUTERS/Kevin Lamarque

Former Vice President Joe Biden told campaign donors today that any Israeli annexation of the West Bank would “choke off any hope for peace,” according to a transcript of the presumptive Democratic nominee’s remarks seen by Al-Monitor.

“We also have to make clear I do not support annexation,” the presumptive Democratic nominee said at a virtual fundraiser with Jewish Democrats. “Israel needs to stop the threats of annexation and stop settlement activity because it will choke off any hope of peace. Today neither [Israel’s] present government or the Palestinians want to take steps thanks to President Trump’s unilateralism.”

He added that the Trump administration has “just been unequivocal on anything that [Prime Minister Benjamin Netanyahu] does and has been equivocating on the importance of this two-state solution.”

Tickets for the virtual fundraiser started at $1,000 and hosts had to raise or contribute $28,000.

Why it matters: Biden’s comments came a day after his chief foreign policy adviser, Tony Blinken, told advocates from the Democratic Majority for Israel group that the former vice president would raise most disagreements with the close US ally in private. But the former vice president’s remarks today illustrate an inherent point of tension with Netanyahu, who wants to move forward with annexation as soon as possible for fear that a Biden victory in November could complicate his plans.

Israel's ambassador to the United States, Ron Dermer, has started lobbying the Trump administration and Congress to line up behind annexation before the November election in case Biden wins, Israel’s Channel 13 reported Monday. Netanyahu secured a deal with his Blue and White coalition partners, led by Benny Gantz, to move forward with annexation as soon as July per the terms of Israel’s new unity government. Trump’s peace plan calls for the annexation of Israeli settlements in the West Bank as well as the entire Jordan Valley, but Gantz has expressed reservations over the issue, reportedly prompting the Trump administration to reconsider the timeline.

Biden had previously warned that annexation would undermine support for Israel within the United States in a video address to the American Israel Public Affairs Committee’s annual conference in March.

What’s next: Biden also reiterated that he would not place conditions on US military aid for Israel as president despite pressure from the left to use it as leverage against annexation. He also committed to restoring Palestinian aid within the confines of the Taylor Force Act, which withholds assistance equal to the amount the Palestinian Authority spends on payments to convicted terrorists or their families.