The Donald Trump administration’s new COVID-19 aid for Palestinians and Yemenis represents a tiny portion of the funding Congress actually appropriated to help both peoples. 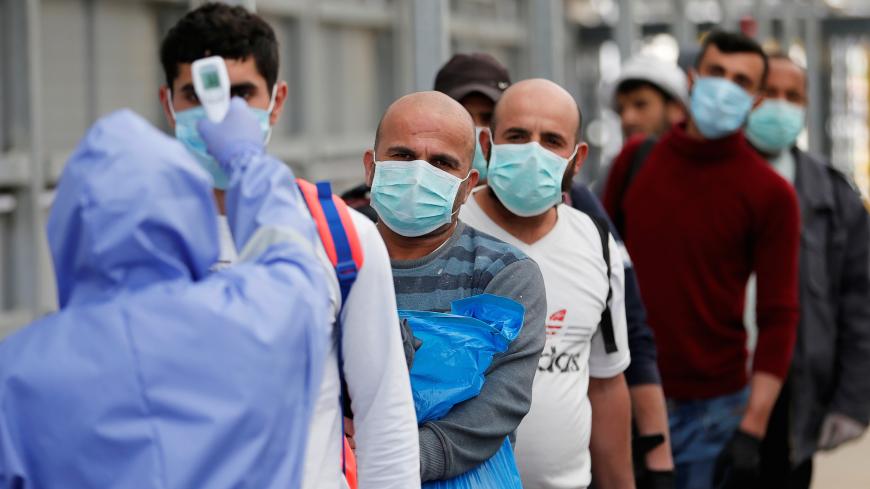 A healthcare worker checks the body temperature of Palestinian workers returning from Israel, amid concerns over the spread of the coronavirus disease (COVID-19), outside the Israeli-controlled Meitar checkpoint, near Hebron in the Israeli-occupied West Bank April 7, 2020. Picture taken April 7, 2020. - REUTERS/Mussa Qawasma

The Donald Trump administration is touting a small amount of COVID-19 assistance for both Palestinians and Yemenis as part of a major increase in coronavirus aid for several Middle Eastern countries. There’s just one problem — the aid for Palestine and Yemen falls short of the funding Congress actually appropriated for fiscal year 2020.

The State Department on Thursday announced $5 million in new coronavirus aid for the West Bank and Gaza as well as another $500,000 for Yemen as part of a $508 million emergency package. But that aid comprises only 7% of the Palestinian economic and humanitarian assistance and 1% of the Yemeni stabilization assistance that Congress has appropriated for fiscal year 2020.

“I’m very pleased the USA is providing [$5 million] for Palestinian hospitals and households to meet immediate, life-saving needs in combating COVID-19,” tweeted US Ambassador to Israel David Friedman. “The USA, as the world’s top humanitarian aid donor, is committed to assisting the Palestinian people [and] others worldwide in this crisis.”

Congress appropriated $75 million in Palestinian economic and humanitarian assistance for this fiscal year while severely limiting the Trump administration’s ability to reprogram foreign aid funding. The Trump administration first eliminated $215 million in Palestinian economic aid in 2018 by reprogramming it elsewhere without congressional authorization — a policy championed by Friedman.

“The $75 million appropriated for humanitarian assistance was already a significant drop from what Palestinians have historically received from the US,” wrote Aaron Weinberg, the government relations manager at the center-left Israel Policy Forum. “What the administration released yesterday pales in comparison to that total, while being touted as an achievement. This is all occurring against the backdrop of COVID-19 and its impact in the region.”

“While there have been stories of increased Israeli-Palestinian cooperation in combating the virus, we have also seen Israel closing down a testing site in East Jerusalem because it was operated by the Palestinian Authority,” wrote Weinberg.

But that $27 million grant and the additional $500,000 the United States announced Thursday for Yemen will do little to offset the millions of dollars the Trump administration recently slashed from humanitarian aid operations.

The United States suspended $73 million in Yemeni assistance — the bulk of its humanitarian spending on the war-torn country — last month, citing the onerous new aid restrictions on international delivery set up by the Houthi rebels, who control most of the north.

The United States was significantly more generous with Yemen last year, spending some $740 million on humanitarian aid. And the $500,000 in Yemeni coronavirus aid falls short of the $40 million in stabilization assistance Congress has allocated for Yemen this fiscal year.

There has only been one recorded COVID-19 case in Yemen so far. But health experts fear that the lack of testing and the country’s crumbling health infrastructure, coupled with a significantly immunosuppressed and malnourished population, is a recipe for disaster.

Aisha Jumaan, an epidemiologist who heads the Yemen Relief and Reconstruction Foundation, said, “Cutting aid in the midst of the COVID-19 pandemic to a population that is severely vulnerable due to the US-supported Saudi war and blockade that resulted in mass famine, the largest cholera outbreak in recorded history, diphtheria, severe dengue and untreated chronic diseases (which the UN called the largest humanitarian crisis in the world) is a sure way of hastening a catastrophic outcome.”

Still, the Trump administration was far more generous with other countries throughout the region, significantly building upon the $40 million Middle Eastern coronavirus aid package it announced last month.

The new batch of COVID-19 assistance includes $13.3 million for Lebanon and $8 million for Jordan. It also includes an additional $10 million in funding for Baghdad, bringing the total in COVID-19 aid for Iraq up to $25.6 million. Morocco will also receive an extra $1 million after getting roughly $700,000 in last month’s package, while neighboring Algeria will be given $500,000.