Prime Minister Benjamin Netanyahu plays for time before making the decision whether to join a unity government with Blue and White’s Benny Gantz or go for broke and generate a fourth set of elections. 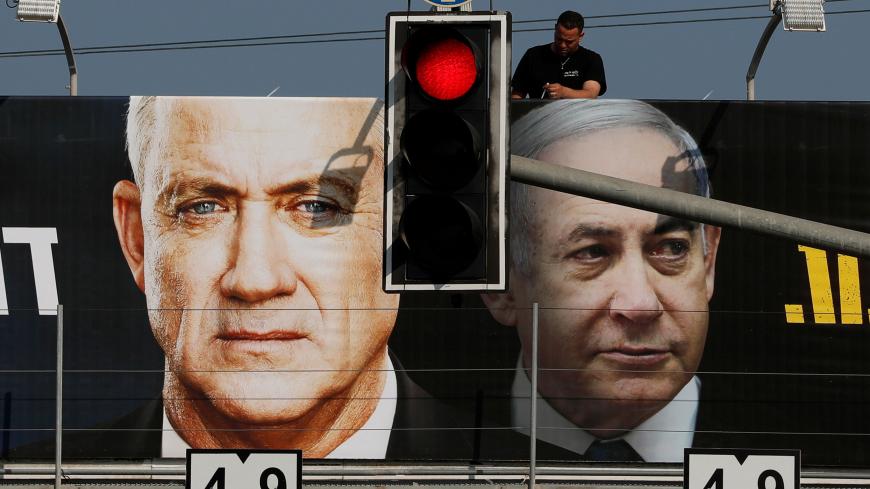 As of midnight April 15, Israeli politicians have 21 days to avert the country’s fourth consecutive elections.

To recap: Following the third elections on March 2, President Reuven Rivlin gave Blue and White party leader Benny Gantz first crack at forming a government within 28 days. Gantz failed. Rivlin decided he would only hand the mandate to someone endorsed by 61 Knesset members (out of 120). And so, he skipped over Interim Prime Minister Benjamin Netanyahu, who does not have the required number of endorsements, continuing to the final leg of the electoral process. Thus, Rivlin handed the mandate to the Knesset.

Each of the parliament members now has until May 7 to mobilize 61 lawmakers and form a government. Should one of the 120 achieve this feat, Rivlin will be required by law to let them try their hand. If none of the lawmakers comes up with the required 61 signatures, Rivlin will then declare game over. The 23rd Knesset will automatically disband, and fourth elections will be held three months later, apparently on Aug. 4. Ironically, Gantz, the chair of the Blue and White party who was on the verge of getting a shot at the premiership until April 15 at midnight, will now oversee the Knesset’s efforts to pick a prime minister from his perch as speaker of the parliament.

For now, representatives for Gantz and Netanyahu are continuing the negotiations they have been conducting for almost four weeks on forming a power-sharing, coronavirus emergency government. Gantz, who has not missed a single chance to avoid mistakes during that time period, is trying to resuscitate his remaining options. He is conducting talks with Netanyahu as if a unity government is about to jell but also preparing to push through legislation to block Netanyahu’s way to the premiership should negotiations fail.

Gantz and Netanyahu are both facing tough choices. Netanyahu has to choose between two options. The first is the highly tempting option of standing for fourth elections and a chance to increase the support of his Likud party and its right-wing and ultra-Orthodox allies and obtain a 61-seat Knesset majority, likely allowing him to evade trial on corruption charges (his bloc has already committed to adopting legislation that would offer Netanyahu immunity). The second option is going for the power-sharing deal, which would mean having to vacate his seat in 18 months and hand it to Gantz, in a rotation agreement.

The dilemma for Gantz is clearer. He must decide whether Netanyahu is toying with him and cheating him the way he has all his previous rivals, or whether he truly intends to forge a unity deal with the rotation it entails in 18 months. The decision by Gantz to go for the unity government option was rejected by about half of Blue and White’s lawmakers, who opted for dismantling the party. Chief among them is Blue and White senior Yair Lapid, who now heads a separate Knesset faction. But after paying the price of dismantling his own party, Gantz was up for a surprise. On April 16, Gantz realized the agreements he has since reached with Netanyahu’s people had miraculously vanished in the face of new conditions Netanyahu pulled out of his sleeve only minutes before the deadline for concluding the deal. Gantz was left high and dry, having forfeited the support of his center-left voter bloc and been denied entry into Netanyahu’s camp.

Gantz nonetheless is soldiering on, still negotiating even as these lines are being written, and even toying with the idea that despite it all, Netanyahu knows in his heart of hearts that his best and most certain option right now is unity. All other options are too risky.

On April 16, Gantz gave the unity-rotation deal one final chance. Unless Netanyahu signs off on a coalition agreement by April 20, Gantz and what remains of his original Blue and White party intend to speedily move ahead with proposed legislation against the Likud party leader in the remaining days before the Knesset is dispersed and new elections are called. The bills, tabled by Yisrael Beitenu party Chair Avigdor Liberman, would bar Netanyahu from forming a government as long as he is under indictment for bribery. This was Blue and White’s Plan A before Gantz split the party in order to try and join Netanyahu.

Gantz and Netanyahu know that the decision they face will determine the fate of their political careers. Gantz’s foray into politics could be ignominiously buried a year and a half after the retired army chief ventured into the political minefield. Netanyahu, for his part, has already broken all of Israel’s political records, including the dubious one of being the first incumbent prime minister indicted in court on charges of corruption. Now he wants to be the first (and probably last) in history to survive such a predicament.

Netanyahu is torn, and he is not alone. His wife, Sara, and son, Yair, are both with him in coronavirus-induced isolation at the official residence on Balfour Street, pushing him to go for broke. With the latest polls giving his Likud party 40 Knesset seats (compared to 36 on March 2), he could be facing a historic opportunity to change the face of the nation, humble the Supreme Court, and pass laws enabling him to remain in power and avoid trial.

Still, Netanyahu himself knows that the 40 seats forecast by the polls could go up in smoke by August in light of Israel’s deep economic crisis that would have hundreds of thousands of unemployed clamoring for his head. Netanyahu, however, has in recent years lost his ability to decide for himself. Decisions on Balfour Street are made by an executive board consisting of himself, his wife and his son. According to his associates, he usually finds himself in a minority, with his status in this triumvirate lower than that of the other two.

Netanyahu’s greatest concern right now is focused on the Supreme Court. Having adopted the “deep state” belief espoused by the American alt-right, Netanyahu is accusing the justices, especially activist former Chief Justice Aharon Barak, of plotting to overthrow him. People who have spoken with Netanyahu in recent weeks report that he is convinced that if the Supreme Court rules in the coming weeks that an indicted politician cannot form a government, masses of Israelis will take to the streets in violent protest against the decision. Some two years ago, Rivlin predicted that Netanyahu would fight to the last drop of Israeli blood and not hesitate to burn down the club and its members in order to retain power. Rivlin’s prophecy seems to be coming true at great speed.

Benny Gantz is Netanyahu’s complete opposite: a polite officer and gentleman completely unfamiliar with the laws of the jungle regulating life in Israel’s political swamp. Gantz did not learn a thing from all the stunned politicians tricked by Netanyahu’s unfulfilled promises for the past 30 years. As aforementioned, in the sincere belief in Netanyahu’s word and handshake, Gantz dismantled the alternative party he had formed to replace him, only to realize minutes later that Netanyahu’s word was no good and the same hand he shook had now plunged a knife into his back.

Surprisingly, Netanyahu manages to continue playing Gantz. The negotiating teams met April 16 and are scheduled to meet again April 17. Thus, Netanyahu is buying valuable time. The 21-day clock is ticking, and with every passing day, the chances of Gantz mobilizing his walking-dead, 61-seat Knesset bloc to complete anti-Netanyahu legislation are diminishing. The perfect storm into which the State of Israel was plunged over a year ago is growing in intensity and shows no signs of abating. On the contrary: A fourth round of elections will turn the current chaos into pure hell, a Supreme Court ruling on petitions against Netanyahu could set off civil strife, and the rampaging coronavirus crisis lacks the energy by now to douse the flames.