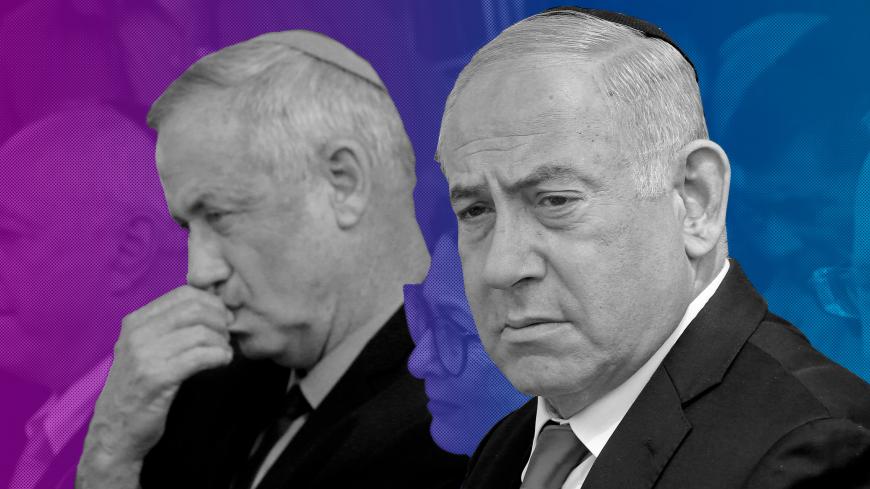 The unprecedented coalition agreement signed on April 20 between Interim Prime Minister Benjamin Netanyahu and Blue and White chair Benny Gantz means a major change in Israel’s system of government. The system in place for over 70 years whereby a prime minister heads the executive branch and administers a government of ministers as the first among equals is no more. It has been replaced by a government led by a premier and an “alternative,” a two-headed regime. No longer will one man have the final say. Two entirely different people will be forced to share the reins of governance.

Under their power-sharing deal, both Netanyahu and Gantz will live like prime ministers in official residences, protected and driven in convoys. Neither will be able to fire a minister from the other bloc. Netanyahu will manage his quota of 18 ministers and Gantz will handle his, though he intends to make do with fewer than his allotted share of 18 to quell public criticism of the monstrous government at a time of coronavirus-induced austerity.

The switch 18 months from when the government is sworn in will be approved in advance as part of a rotation bill voted on by the legislature in advance. The proposed bill includes a series of checks and balances, amendments and conditions that will regulate this unwieldy construction over the next few years. In 18 months, Netanyahu will stop being prime minister and be downgraded to “acting prime minister" and Gantz will take his place. Every important policy move and significant decision on appointments will require consensus. The next chief-of-staff of the Israel Defense Forces, police commissioner, attorney general, judges and more will need the agreement of both sides.

It will be a government of mutual paralysis. Though Netanyahu gets 18 additional months as prime minister, Gantz will block him on many issues, halting the destruction of Israel’s democratic institutions and legal system. Many in Israel regard the deal as corrupt and even morally reprehensible, while many others are breathing a sigh of relief over the breakthrough in the deadlock that has deprived Israel of an elected government for the past 17 months.

The agreement is attracting harsh criticism from every direction. Netanyahu is facing an insurrection within his own party from the ministers who will lose their posts or be significantly downgraded. The political right is furious at Netanyahu for giving up the legal system bastions it had conquered in recent years. Netanyahu’s most significant achievement in the coalition agreement is that as of July, he will be able to lead a historic annexation of part or all of the Israeli settlements in the West Bank. Despite its grave reservations about such a move, the Blue and White had no choice.

“The fact that he will bring the issue up for a vote does not mean it will be approved,” foreign minister-designate and Gantz’ No. 2 Gabi Ashkenazi told Al-Monitor. The former IDF chief went on, “We believe Netanyahu knows the risks of this move and we are convinced that a serious discussion will be held about it in the cabinet and the prime minister will hear the views of the security agency heads and will weigh all the considerations involved before he takes irreversible steps.”

Blue and White clearly realized that a deal with Netanyahu would not be achieved without the magic word, “annexation.” With it, Netanyahu hopes leave a legacy that overshadows the suspicion, probes and criminal trial that have marred his career.

Gantz and Ashkenazi are also coming under fire from their voters. Several petitions against the agreement have already been presented to the Supreme Court and there is no guarantee that the justices will greenlight the deal in its current form. Some Blue and White voters are angry that Gantz and Ashkenazi are providing Netanyahu with a legal defense. According to an override clause, should the top court void the coalition agreement or bar Netanyahu from serving as prime minister due to his criminal indictment, new elections will immediately be scheduled.

Gantz rejects the criticism out of hand, pointing out that the Justice Ministry will be run by the Blue and White, stemming Netanyahu and his cohorts' offensive against the state’s law enforcement and legal system. As Blue and White failed to unseat Netanyahu in three consecutive elections, the new plan is to sideline him in several stages. The first stage is giving him an expiration date.

“Netanyahu intends to see through the entire legal process,” a senior Blue and White source told Al-Monitor on condition of anonymity. “From the negotiations we conducted with him it is clear that he will stand trial [in May], drag it out as long as possible and if convicted, he will appeal to the Supreme Court, and if need be he will demand a second deliberation by the justices. He is not giving away anything for free.”

Netanyahu’s next major test will come in July. Will the prime minister make good on his pledge to annex some of the Jewish settlements in the West Bank? The key lies in Washington, specifically in the hands of President Donald Trump. July puts Trump four months away from the US presidential elections, not the best time to alienate his evangelical base and reject its dictates. Netanyahu hopes to use the achievement to carve his name in the annals of Israel’s political right. Gantz and Ashkenazi are hoping they can stop him once the price of such annexation becomes clear.

This confrontation will only take place if the above described government is established. Quite a few obstacles await it in the coming weeks, the biggest being Netanyahu’s tendency to renege on agreements he signs.