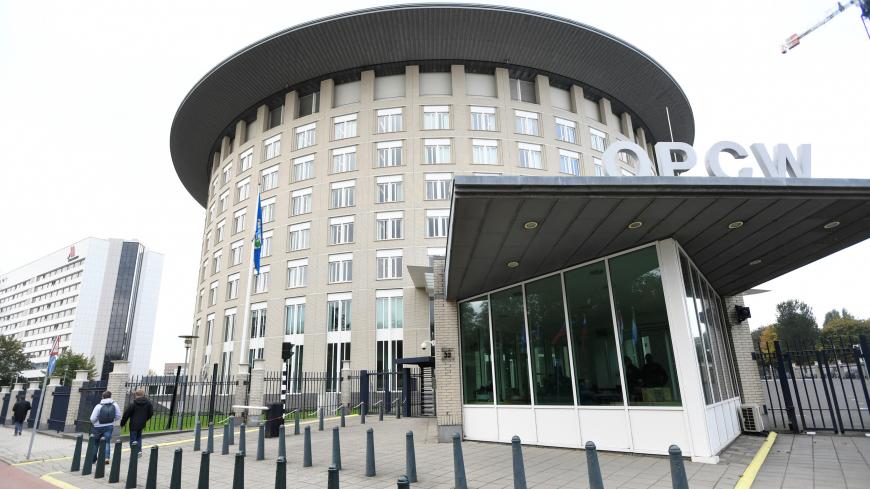 The building of the Organization for the Prohibition of Chemical Weapons (OPCW) is pictured in The Hague, Netherlands, Oct. 4, 2018. - REUTERS/Piroschka van de Wouw

In a statement, Pompeo called the report from the Organization for the Prohibition of Chemical Weapons (OPCW) “the latest in a large and growing body of evidence that the [Bashar al-Assad] regime uses chemical weapons attacks in Syria as part of a deliberate campaign of violence against the Syrian people.”

“No amount of disinformation from Assad’s enablers in Russia and Iran can hide the fact that the Assad regime is responsible for numerous chemical weapons attacks,” he added.

The OPCW report released Wednesday focused on three separate aerial attacks that dropped chlorine and the nerve agent sarin on the opposition-held village of Ltamenah in March 2017. The investigators concluded they had “reasonable grounds to believe” the Syrian air force was responsible for each of the chemical attacks.

The report went on to say that the attacks, carried out by Su-22 military airplanes and a helicopter, would have only taken place under the orders of high-ranking Syrian military officers.

Why it matters: Syrian President Bashar al-Assad has denied using chemical weapons during the country’s nine-year war despite a body of evidence from rights organizations, journalists and witnesses documenting otherwise.

Wednesday’s report, in the face of objections from Syria’s key ally Russia, marks the first time the OPCW has assigned blame over chemical weapons use in Syria. Previously, the watchdog could only say whether such attacks happened, not who was behind them.

A separate United Nations inquiry submitted this week to the UN Security Council, of which Russia is a member, refrained from explicitly naming Moscow as a perpetrator in attacks on hospitals and other civilian targets. Russia has provided military support to the Syrian government since 2015 and has shielded the regime from sanctions at the Security Council.

What’s next: The OPCW’s findings Wednesday pave the way for countries to impose new sanctions on Syria and its allies. The group’s director-general, Fernando Arias, said it is now up to “the United Nations secretary-general and the international community as a whole to take any further action they deem appropriate and necessary.”

The watchdog has also asked to investigate several other alleged chemical attacks, including one in the town of Douma, east of Damascus, that killed at least 40 civilians on April 7, 2018. The attack prompted punitive, but limited, missile strikes from the United States, UK and France against Syrian military targets.

Know more: In Syria’s northeast, Amberin Zaman and Dan Wilkofsky investigate a possible campaign of intimidation against activists at the hands of the US-led coalition. Elizabeth Hagedorn also has this in-depth report on health care workers bracing for the coronavirus in northwest Syria.